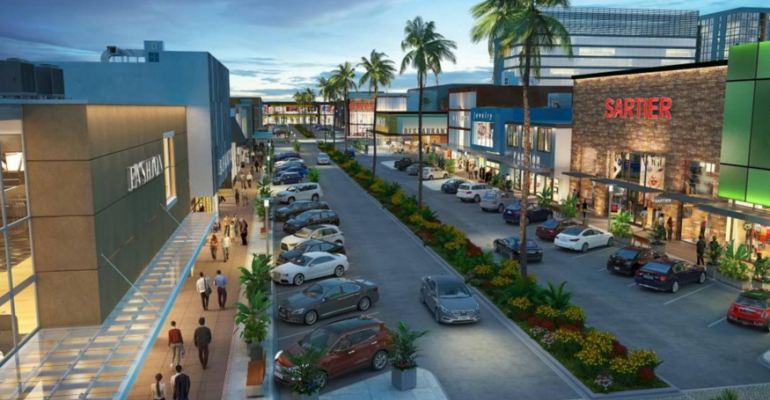 Kimco’s COO weighs in on the prognosis for the retail real estate sector and REIT consolidation.

While regional malls have been hit particularly hard recently by the loss of underperforming department stores, open-air shopping centers haven’t gone completely unscathed as they’ve lost anchors like Kmart and Toys ‘R’ Us.

However, David Jamieson, executive vice president and COO of retail REIT Kimco Realty Corp., says the shopping center operator was prepared to recapture those boxes and fill them with higher-performing tenants.

Kimco has also been returning to its roots, refocusing on premium properties in major U.S. metro markets. The REIT has been disposing of underperforming centers and those outside the U.S. for several years. This year alone, it sold 49 assets and six land parcels for $750 million. The sales provide a source of capital to fund its extensive redevelopment activities.

NREI spoke with Jamieson about the state of the U.S. retail market and Kimco’s future strategies. The Q&A has been edited and condensed for clarity.

NREI: How has the Kimco portfolio been affected by recent store closings and bankruptcies, and how have you dealt with it?

David Jamieson: We anticipate and manage our at-risk portfolio very aggressively. We look at opportunities to balance our tenant mix, bring in new tenancy that’s going to add vibrancy to the centers, and try and stay ahead of these waves as they occur. Toys ‘R’ Us is something that we watched and monitored for an extended period of time, so in turn, we started to sign leases that were contingent on recapturing those boxes. If and when the inevitable did occur, we were already in a position to act and bring in that new tenant and get them operating as soon as possible.

We’ve taken a very similar approach to Kmart. We’ve been signing contingent leases, not knowing necessarily how the landscape is going to look in three, six, 12 months with Kmart, but depending on the direction it takes, we’ll be prepared. I think that’s a big testament to the quality of our leasing and management teams in that they’re constantly looking at where our risk may arise, and then how do we proactively counter that by reaching out to retailers that are actively expanding.

We really view these as opportunities, because you’re replacing a retailer that continues to have its challenges—and may not be as dominant a traffic-driver as it once was—with a new retailer that’s much more vibrant.

NREI: What types of anchors do you prefer vs. five or 10 years ago?

David Jamieson: Obviously, the world of off-price has really been on an accelerated growth path. If you look at TJX, our top tenant in our portfolio, what makes them so successful is their merchandising mix, and this idea of the ‘treasure hunt.’ But they also continue to refresh that box that drives the customers back to our center, back to their store on a recurring basis. That’s what we strive for.

In addition, we’re finding those tenants that will extend the life of the center from a 12-to 18-hour day. An anchor today isn’t necessarily a big-box retailer. It could be that specialty coffee shop, restaurant, bowling alley/entertainment use, movie theater, office-price apparel or fitness. For example, we converted an old Macy’s building at Suburban Square (in Ardmore, Pa.]) and brought in Life Time . Life Time is an incredible anchor for that center. You’re seeing the energy flow throughout the center, and it has helped with the balance of the retail spaces as well. Who we look for is dependent on the type of shopping center and what it calls for—whether it’s fitness, entertainment or specialty grocer.

NREI: How much more store shrinkage do you expect in the industry?

David Jamieson: If you don’t have access to capital or ability to reinvest into your format, whether it’s online and/or offline, the competition will quickly catch up to you. I envision you’ll probably see forms of consolidation including certain retailers that might be looking to enter a new market. We just saw Lidl  acquire Best Market in the Long Island area to help propel their growth strategy. I can see that as a continual trend.

NREI: How have retailers transformed from brick-and-mortar to omni-channel retailers, and what does that mean for landlords like Kimco?

David Jamieson: It’s a great opportunity for Kimco because they’re refreshing the stores. Look at what Target has been doing and the capital they’ve put in to refresh, reinvent their stores. That drives interest from the customer and brings them into the center. I look at those retailers making the critical investment. Look at what Best Buy has done. It’s definitely more of an experience when you walk through the store. They’ve been the poster child of the turnaround story where they were being pressured by Amazon and how they’ve come out of it a much stronger organization. And it’s really driven by the strength of their brick-and-mortar stores.

And when you look at online retailers like Casper, Warby Parker and Allbirds that continue to expand and see the opportunities in brick-and-mortar, it’s a great complement to online. That’s further evidence that brick-and-mortar has solidified its place in the broader retail mix.

David Jamieson: We’re on track to sell between $800 million and $900 million [in assets] this year. It’s the final repositioning of our core portfolio, so at the end of 2018, we’ll be left with a concentrated portfolio along both coasts and through the Sun Belt, with smaller concentrations in Chicago and Minneapolis.

What that allows us to do from an operating standpoint is really gain economies of scale. We have teams that are much more focused in these core markets where you continue to see population growth, higher levels of education and expanded job growth. From a landlord’s perspective, it’s creating new opportunities to help reinvent our real estate.

[For example], we’re investing more efforts into densifying our sites. Pentagon Centre (in Pentagon City, Va.) is a great example where we were the only remaining single-story piece of retail within this market and everything else got developed around us. We were able to go back and master-plan a very large densified project. We’re constructing a 26-story, 444-unit residential tower that we’ll deliver next year. In light of the recent announcement by Amazon, this center sits directly across the street from what will be the Amazon headquarters.

David Jamieson: We have a handful of development projects underway. Going forward, more of our capital will be invested in the redevelopment of existing centers. Where we see the real opportunities is this ‘urbanization effect’ taking hold of our properties and allowing us to create a higher and better use. It might be a more balanced approach between retail and multifamily and hotels.

We’re under entitlement for a hotel in Cupertino, which is directly across from the Apple Two campus (and just south of Kimco’s Cupertino Village). As a landlord, it’s important that we continue to evolve and adapt to our surroundings and what the local community needs. We have about $1 billion under redevelopment and about $2 billion in the shadow pipeline that we continue to work through and entitle.

NREI: What’s your prognosis for consolidation in the shopping center REIT space?

David Jamieson: I think we probably have a few too many retail REITs. It’s a matter of if you go through a consolidation, how do you become a better company for it? I don’t think it’s just ‘consolidate to consolidate,’ but what are the real valued attributes through this consolidation or buyout that you would be able to gain internally? I wouldn’t be surprised if there was some form of consolidation in the future.

NREI: What does the future of retail look like to you?

David Jamieson: I think it becomes more personal, more customized. As technology continues to advance, the service side of retail will continue to impress us. In-store investments will continue to remove the ‘pain points’ of the shopping experience.