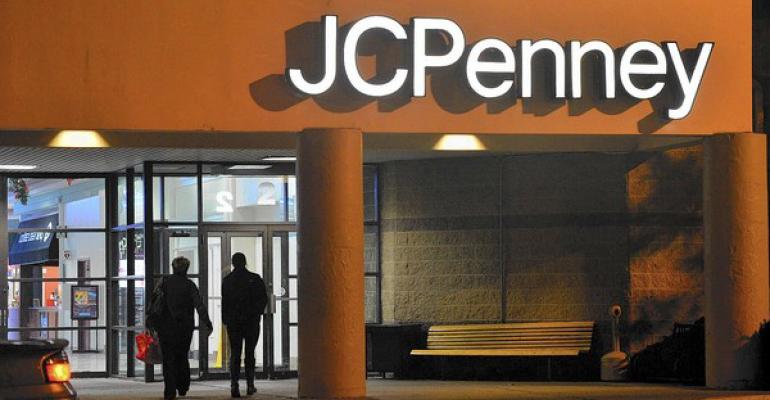 J.C. Penney Needs to Prove It's Not the Next Sears: Sarah Halzack

If J.C. Penney doesn’t manage to deliver real progress during the 2018 holiday shopping season it will fail a crucial test.

(Bloomberg Opinion)—This holiday season, a bankrupt Sears Holdings Corp. will be fighting a likely futile battle to keep its Sears and Kmart chains from having to liquidate in 2019. But it's not the only retail giant with a lot to prove during the industry's most crucial months: J.C. Penney Co., a chain with mounting struggles and a new CEO at the helm, also faces a crucial test.

Investor doubts about the troubled department-store giant are already piling up. Its short interest is about where it was during the worst of the Ron Johnson era, when that former Apple Inc. executive became CEO and made unpopular changes that devastated sales. It was even higher earlier this summer:

If J.C. Penney doesn't manage to deliver real progress during the holiday spending blitz, I suspect already-fragile investor confidence is going to erode very quickly. For one, as I've noted previously, the strong economic backdrop should provide a powerful tailwind to the retail industry overall this holiday season. Expectations for major retailers will be running high. Any chain that doesn't perform well will face tough questions about why they couldn't score with consumers at such an advantageous moment. Plus, it's clear that two of J.C. Penney's closest rivals, Macy's Inc. and Kohl's Corp., are on the upswing, demonstrating that improvement is achievable now, even in the challenged department-store format.

Also, J.C. Penney has been carefully maneuvering for years to be the retailer of refuge for Sears and Kmart customers as more and more of those chains' locations disappeared. With Sears filing for bankruptcy this week, investors are more than ever going to be looking for hints that J.C. Penney is, indeed, benefiting from Sears’s stumble. If we don’t see clear evidence of that, it should give investors pause about how much the retailer really stands to gain should Sears end up having to liquidate in 2019.

There are other factors, too, that offer reason for worry about J.C. Penney's future. Inventory management, for example, has been a challenge lately as the company struggles to unload slow-moving merchandise.

J.C. Penney, to be fair, has done plenty of smart things in recent years, including adding more Sephora shop-in-shops and expanding its offering of plus-size apparel. These things have helped pull it back from the precipice of retail doom.

But the fact remains that Johnson blew a major hole in its revenue haul that has just simply never been filled. With each passing year, it gets harder to see how J.C. Penney reclaims that market share.

The job of solving this problem now falls to Jill Soltau, who was named CEO earlier this month. The role had been vacant for several months after Marvin Ellison abruptly left the company for the top job at Lowe's Cos.

Soltau may ultimately prove to be a terrific steward of J.C. Penney. But the problem is, right now, she's a bit of a mystery.

When Ellison arrived, it was relatively easy for investors to talk themselves into the idea that he would be a balm for a wounded company. Ellison came from Home Depot Inc., a chain that is one of the industry's gold standards. He was to get several months of hand-holding from Myron Ullman, the one-time J.C. Penney CEO who stepped in and stanched the bleeding after the Johnson debacle.

Soltau, however, comes to J.C. Penney from privately held JoAnn Stores, the large fabric and crafting chain. We don't really have much insight as to how JoAnn's sales and profits have fared under her leadership. In 2011, its last year as a publicly  traded company, JoAnn's net revenue was about $2.1 billion, suggesting it is likely a much smaller retailer by sales than J.C. Penney.

You can imagine a scenario in which investors would tolerate middling holiday results from J.C. Penney if the incoming CEO seemed like a sure thing to be a savior. But with Soltau, it's simply too hard to assess whether she is capable of executing this difficult rescue effort.

It’s all the more reason why J.C. Penney needs a Christmas miracle. If it can’t deliver one, wavering investors will have even less reason to stick around.