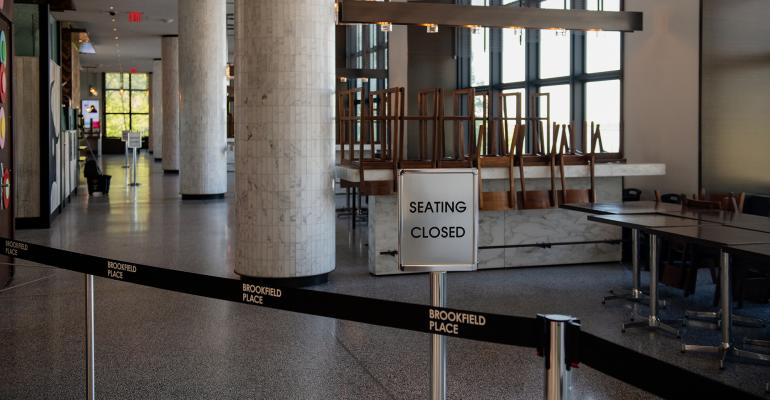 Some will be undone by higher operating costs driven by the pandemic. But the sector will eventually rebound, brokers insist.

Food halls will struggle as states reopen businesses and some may close permanently, say industry sources. Over the long term, however, they should return to their pre-COVID-19 success.

Before the virus hit, there were approximately 226 food halls operating in the U.S., according to Phil Colicchio, executive managing director of Colicchio Consulting, the specialty food and beverage, hospitality and entertainment group at Cushman & Wakefield

“Prior to the current health crisis, food halls were a growing trend that catered to a macro trend among consumers looking for more authentic and varied dining options, as well as more experiential and community elements,” says Scott Holmes, senior vice president and national director of the retail division with brokerage firm Marcus & Millichap. “While there will be time needed, and perhaps some operating changes that will need to be implemented, we expect that macro trend to continue, making these retail centers attractive to consumers and investors alike.”

But initially, food halls will struggle as they reopen due to several factors and considerations for the operator, says Anjee Solanki, national director of retail services with real estate services firm Colliers International. Those considerations include the need for reduced customer entry, strategic seating arrangements and safety measures such as contactless ordering, kiosk ordering and rotating staff. There will also have to be a significant increase in cleaning, according to Adam Williamowsky, director of restaurants at Streetsense, a design and strategy firm specializing in retail and restaurants. This will in turn create higher labor and materials costs to keep food hall spaces safe and prolong the amount of time it will take for food halls to rebound.

“I wouldn’t say [food halls] are dead, they’re just put on the shelf,” says Solanki. “Of course, food halls are going to take a little longer to open compared to drive-throughs or restaurants that have the ability to quickly flip and provide curbside delivery.”

Some brokers in secondary markets are saying restauranteurs and quick-service restaurants are struggling to get their employees back to work because their unemployment benefits are higher than their original wages, says Solanki. Furthermore, the cost of operating will continue to go up in the entire supply chain for the food and beverage industry.

“The current sentiment is generally negative related to these categories, since many have been forced to shut down, through no fault of their own,” says Holmes. “Once the shutdowns are lifted, and consumers begin to feel more at ease, we would expect all of these categories to come back strongly, but it will take time for that to happen.”

In order to proceed with reopening, food hall owners will need to rethink the operations of their establishments, so they comply with social distancing and other state- and city-mandated health and safety guidelines. For national companies with multiple locations this is an added challenge as reopening plans will need to be customized locally, says Solanki. Williamowsky notes that some food halls will be forced to close permanently.

However, food halls will also have some advantages over traditional restaurant venues in regaining their footing once the lockdowns end.

“The trend that I think is most important is the trend of the economic structure that most food halls are built on,” says Cushman & Wakefield’s Colicchio. “The cost of opening up in a food hall for a vendor is staggeringly low when you compare it to either a food truck or a stand-alone restaurant. And that is going to also be a very important component of the bounce back that we all hope to see.”

The price for a vendor to open a food hall stall typically ranges between $25,000 and $75,000 depending upon the “set up/ turnkey fee” paid by the vendor to the owner or developer, which can be anything from $0 to $50,000, says Colicchio. The remaining costs are those initial costs a vendor generally incurs, including upfront labor fees, inventory purchases and marketing and travel expenses. A full-size restaurant can cost anywhere from $250,000 to $4 million to open. The latter figure would be for average- sized restaurants opening in major markets where the vendor is responsible for build-out costs, according to Colicchio. As a result, depending on the market and build-out cost, food hall stalls can be up to 80 percent to 90 percent less expensive to open than full-sized restaurants, notes Williamowsky.

In addition to many independent restaurants being severely undercapitalized pre-COVID-19, a big issue for the traditional restaurant model was high fixed rent, says Trip Schneck, executive director at Cushman & Wakefield. But in the food hall model, under a percentage rent deal structure, the landlord and the tenants share the risks and rewards of the enterprise.