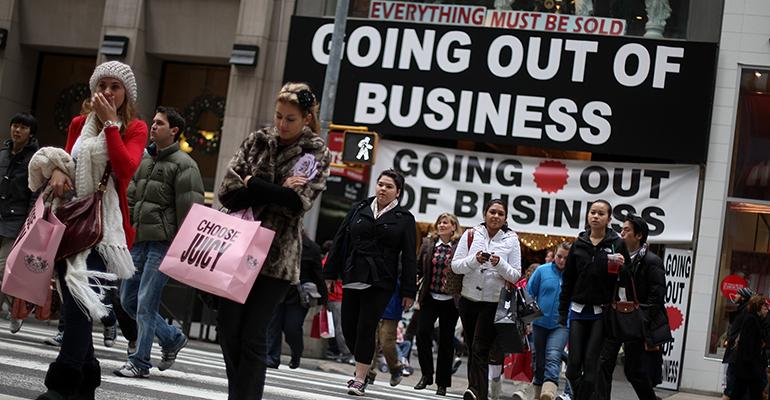 The tony retail districts in New York City, Chicago and San Francisco offer the best in luxury retail. But after years of getting prestige brands to agree to double-digit increases in rents, landlords on Manhattan’s Fifth Avenue, Chicago’s Michigan Avenue and San Francisco’s Union Square are in their second year of double-digit declines in asking rents.

In San Francisco, where well-heeled shoppers stroll Union Square, asking rents tumbled by about 25 percent; in Chicago, home to Michigan Avenue, rents fell by about 20 percent, and in Manhattan, famous for Fifth Avenue and Madison Avenue, rents came down about 30 percent in the last two years, according to Garrick Brown, head of retail research for the Americas with real estate services firm Cushman & Wakefield.

If the declines seem drastic, it is because rents were coming down from unsustainable highs, according to industry professionals. E-commerce was accelerating and taking greater share of overall sales, the growth of discounting was spurring race-to-the-bottom pricing, and the rising millennial demographic preferred to spend their money on experiences, instead of typical retail hauls, like apparel, jewelry and accessories.

“Rent increases were tracking between 10 percent and 13 percent each year,” Brown says. “Landlords were getting ahead of themselves to some degree, especially when you consider that the writing was on the wall.”

A correction that began in 2016 continued through 2017, according to real estate sector data. Ground floor asking rents fell in 13 of Manhattan’s 17 high profile corridors the Real Estate Board of New York found in its Manhattan Retail Report for Fall 2017. Year-over-year vacancy rates, expressed as availability, increased in almost all of the high street markets, according to Cushman & Wakefield’s Q4 2017 Marketbeat report for Manhattan. The city’s overall availability rate was about 18.5 percent during that period, up from about 14.5 percent in the fourth quarter of 2016.

The vacancy rates are ticking up at the same time as the high streets of gateway cities like New York and Miami continue to swarm with tourists every year. Now more than during the previous economic cycles tourists want to go home with memories of their experiences, not necessarily overstuffed suitcases.

In Manhattan, for instance, a total of 60.5 million tourists visited the city in 2016, a record, according to information from NYC & Co. The following year that number increased to about 61.8 million, according to reports.

Meanwhile in Miami, with its 15.8 million international and domestic visitors a year, the retail tenants on its high-end shopping street, Lincoln Road, were in for a bigger sticker shock due to the largely triple-net lease structure of the market.

Florida collects property and sales taxes, instead of levying an income tax. While the Miami market is experiencing similar conditions to other high streets around the country, that city’s quandary is complicated by the resetting of operating expense calculations on the properties. It is possible that a building that used to have a cost basis of $1,000 per sq. ft. has a new cost basis of $5,000 per sq. ft. through the process of aggressive bidding, and the property tax bill can triple or quadruple as a result, says Greg Masin, a senior director of retail services in Cushman & Wakefield’s Miami office.

There was a disconnect in the way that those obligations were communicated to tenants, adds Frank Begrowicz, a director of retail services in Cushman & Wakefield’s Miami office. If a landlord figured that he or she would need to get $350 per sq. ft. in base rent income to justify the underwriting at a 3 percent cap rate, they didn’t always make the connection clear to the tenant that the retailer would have to underwrite over $400 per sq. ft. to cover the rent.

“Because we are in a triple-net market, and everything passes through, there was just an assumption that it would be something the tenant would be aware of and absorb,” Begrowicz says.

As for how changing shopping patterns, greater space availability and asking rent declines will affect cap rates, industry professionals expect the latter to edge up, even as they remain relatively low for several reasons.

“Right now we are seeing diminished retail investment activity because of investor concerns over the health of the sector—generally for class-B or -C properties—and because there are fewer sellers,” Brown says. Owners of class-A properties are generally not trading them, he notes, keeping cap rates in the low range of 4 percent to 5 percent.

Those dynamics will probably require more prudence from the lending sector, according to capital markets professionals, even as property owners and retailers try to work out mutually amenable deals.

“I think they should be more careful in their underwriting,” Robert Grenda, a senior vice president for Morningstar Credit Ratings says of lenders. “Clearly there is enough information for originators and underwriters to know that asking rents have come down and availability rates have come up.”