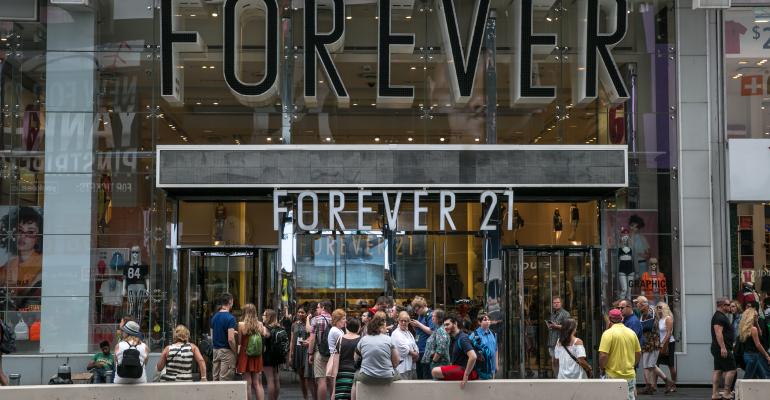 Forever 21 might give a stake in the company to Simon Property Group and Brookfield Property Partners.

(Bloomberg)—Forever 21 Inc. is in discussions to give a stake in the company to its two largest landlords as part of a restructuring that would allow co-founder Do Won Chang to retain a share, according to people familiar with the matter.

The ailing fast-fashion retailer is in talks with Simon Property Group Inc. and Brookfield Property Partners LP about the proposal, which would be part of a bankruptcy filing, said the people, who asked not to be identified discussing a private matter. The negotiations are ongoing, and could end without a deal, they said.

Los Angeles-based Forever 21 is preparing to file for bankruptcy as soon as this month, ideally with a restructuring plan in place, the people said. Company advisers have been working on obtaining a bankruptcy loan package that would give the retailer about $75 million to continue operations during the case, Bloomberg previously reported.

A spokeswoman for Brookfield declined to comment on its involvement in a potential deal, and Simon and Forever 21 didn’t respond to requests for comment.

The trendy retailer’s fate has become increasingly important to mall owners, who’ve seen former stalwarts including Payless Inc. and Gymboree Corp. shutter more than 8,500 stores this year, according to firm Coresight Research Inc. That’s left Forever 21 as one of the largest remaining occupants, with more than 800 stores globally.

At the same time, the retailer is dependent on its landlords, which could play a crucial role as it looks to slim down operations and revive its best locations. The restructuring plan under discussion could include rent forgiveness or other considerations from the landlords in exchange for a stake in Forever 21, the people said.

Simon and General Growth Properties Inc., now part of Brookfield, teamed up to buy most of bankrupt teen clothing chain Aeropostale three years ago. They’ve since sat on the sidelines as retailers liquidated, but Simon has publicly said it’s open to doing similar-type deals going forward.

“We certainly have the ability to help beyond what you might do on the leases and become an investor in a distressed situation,” Simon said. “So we have kind of the ability, together or individually or some combination thereof, to look at becoming more than just a real estate player, but a buyer of these brands.”