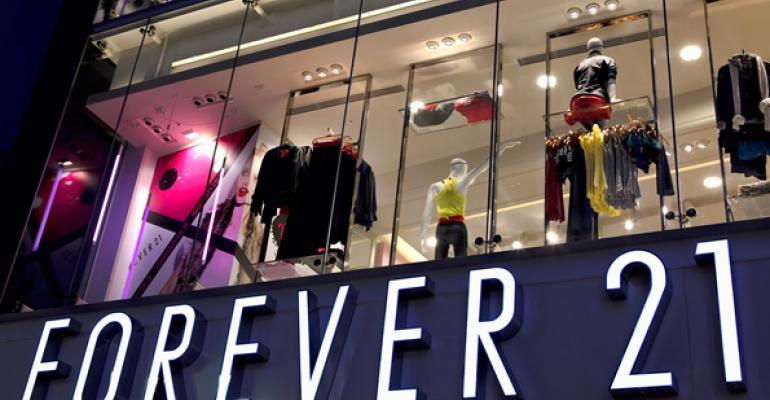 Forever 21 Evaluates the Size of its Store Prototype

Although the old adage claims that bigger is better, that may not be the case for Forever 21’s stores. The apparel retailer is rethinking the size of its stores and talking with landlords about downsizing, according to multiple sources. The move isn’t surprising, says Terrison Quinn, a vice president with Colliers International’s retail services group.

“Forever 21 is doing what a lot of retailers are doing—recalibrating the size of their existing stores and rolling out new supplemental concepts to attract new customers,” Quinn notes, referring to the chain’s new 21Red brand. “They’re adapting to the current retail environment, and that’s a positive thing.”

Time for a plan

Currently, Forever 21 is the fifth largest specialty retailer in the nation. As the retailer is owned and operated by a privately-held family firm, it’s difficult to get a complete picture of its real estate strategy or its financial health.

Forever 21 executives have announced publicly that they want the retailer to become an $8 billion company by 2017 and to open 600 stores in the next three years. Currently, the chain occupies millions of square feet of retail space with about 600 stores worldwide, primarily in regional malls. For example, the chain accounts for 5.5 percent of Taubman Centers’ mall GLA, according to the REIT’s supplemental filings.

The average Forever 21 store contains 38,000 sq. ft., and its largest store is approximately 162,000 sq. ft., according to the chain’s website. Of course, the larger stores carry a much broader selection of merchandise, and their financial performance has been the source of rampant speculation. Many industry experts contend that the larger footprint stores haven’t lived up to Forever 21’s expectations.

Several of those stores were originally Mervyn’s or Gottschalk locations. Those spaces averaged about 80,000 sq. ft.—three to four times the size of Forever 21’s prototypical store.

At the time the company picked those locations, Forever 21’s expansion into larger stores seemed risky, but reasonable. With competition moving in from abroad in the form of H&M and Zara, it made sense that Forever 21 would gobble up empty boxes in an effort to prevent its competition from encroaching on its territory, says Michael Lushing, principal of Los Angeles-based Lushing Retail Advisors.

“It was a good positioning play, and they achieved the goal of deterring the competition,” Lushing says. “But now I think they’re realizing that bigger stores are more challenging than they anticipated so they’re taking a pragmatic approach and downsizing.”

From Terrison Quinn’s perspective, Forever 21’s opportunistic expansion into the vacant big boxes isn’t working effectively for the chain. “Now it’s time for a conversation with their landlords so they can work together to come up with a demising plan,” he says.

The ability to find new tenants to backfill Forever 21’s empty spaces would depend primarily on the quality of the spaces. Owners of centers in desirable locations will be more willing to take back space than those with class-B or class-C centers because tenant demand will vary.

With a number of other retailers downsizing, including Old Navy, Staples and PetSmart, for example, expanding tenants will have more options. And the pool of tenants looking for more than 50,000 sq. ft. of space is quite shallow, Quinn says.

Forever 21, meanwhile, is focused on expanding its 21Red concept, which offers even less expensive merchandise than its flagship brand in smaller spaces. The chain is looking for stores measuring from 10,000 sq. ft. to 12,000 sq. ft. in power and community centers in suburban markets for 21Red, according to Quinn.

“They’re very bullish about this new concept,” Quinn says, adding that he thinks 21Red is more complementary than cannibalizing to the original Forever 21 concept. “21Red will serve a different customer base than the Forever 21 stores in regional malls.”

Despite the performance of its larger stores, Forever 21 remains the leader in the fast fashion sector, Lushing notes. “Downsizing stores doesn’t mean the company is in trouble,” he points out. “Forever 21 is a big player that’s in it for the long run. They’ve built a strong foundation with customer loyalty.”