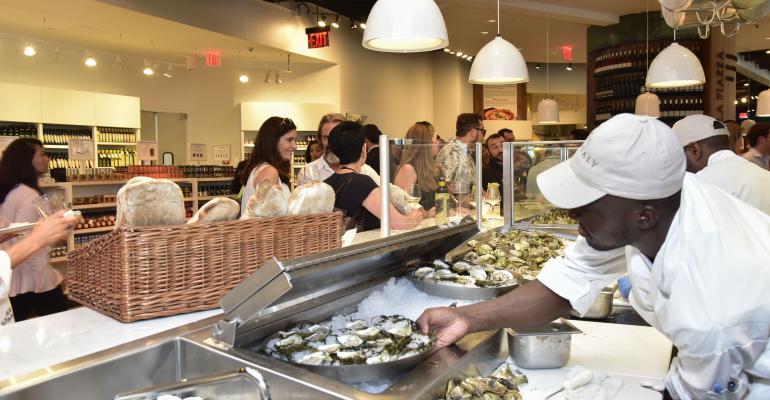 Food halls are considered the newest and hottest way to combine dining, entertainment and even locally sustainable eating in one place.

More than one third of consumers, 34 percent surveyed in a recent AlixPartners study, said they look forward to dining out more often in the next 12 months, according to the research firm’s November 2017 update on the sector. That sounds like encouraging news for landlords around the country who are rapidly expanding food halls in urban shopping districts.

Dining out has been on an upward swing since the National Restaurant Association found that in December 2014, for the first time on record, Americans’ spending at restaurants exceeded their spending at grocery stores. Just as dining establishments are seen as a viable use to backfill vacant anchor spaces, food halls are considered the newest and hottest way to combine dining, entertainment and even locally sustainable eating in one place.

“Landlords suddenly are looking at food halls as great projects to have on board to essentially lure the other tenants in,” especially in high-rise office buildings, says Garrick Brown, vice president and head of retail research for the Americas at real estate services firm Cushman & Wakefield. “It is viewed as an amenity now. If we have a food hall, then that will make it easier to lease up the rest of the space.”

The dining uses are flooding into almost all of the major gateway markets, including New York City, Chicago, Denver and San Francisco. Within millions of sq. ft. of space around the country, the projects offer space to dining operators ranging from fancy food truck fare to chef-driven concepts. They also offer landlords plenty of windfall potential, as industry experts say the food hall business is still in the expansion phase.

In 2016, about 105 food halls were operating across the country, and Brown believes the industry could be at around 250 by the end of 2017. At the current pace of development, about 350 or 400 food halls could be serving up revenue to landlords by the end 2018, he says.

Are they glorified food courts?

It might be tempting to slot food halls as dressed-up food courts that are tucked into the far corners of traditional enclosed malls. Just as traditional enclosed retail spaces are evolving into more diverse places for consumers to incorporate uses such as apartments and medical offices, food halls include much more than mass-market restaurants.

They fall into three main categories, according to Brown. The so-called mega-sized halls are almost always located in very densely populated urban areas, and normally around transit stations, such as the Great Northern Food Hall in the Grand Central Station in New York City. That food hall specializes in Nordic-inspired foods. A mid-sized hall might span 20,000 to 30,000 sq. ft., and can either be a first-floor amenity in an office building, or a stand-alone offering. Developments in this size range often incorporate an entertainment element, or follow an epicurean theme. Bite-sized halls can be as small as 10,000 sq. ft. or less.

At this point in food hall proliferation, many concepts are turning out to be lucrative ventures for the developers. One food hall developer, for example, operates a 20,000-sq.-ft. project in a high-rise building in California, owned by a technology firm. The rent paid by the office tenants at the building average about $60 per sq. ft., while the rents from the in-line food hall tenants are about $120 per sq. ft. The developer’s initial earnings can be as high as $1.2 million.

However, while the food hall business might still be in the growth phase, experts are wary of saturation. New York City offers an indication of where the business is going, according to Brown. Food halls are proliferating there more rapidly than in any other city, with about 30 existing venues and those under development. That number includes some projects that are planned which may or may not be completed.

As food halls expand, experts also warn that cities embracing the concept could reach their saturation point soon. Three food halls are open in Denver, for example, with about four under development. Brown thinks that is about two halls too many, and that while the city prides itself on hip offerings, it can reasonably sustain about five halls, but not seven.

Also, while the AlixPartners study found that respondents want to go out to eat out more often, just 28 percent of respondents said they would actually spend more money.

“The cost of buying something in a restaurant is escalating faster than it is in a grocery store,” says Jan Kniffen, CEO of J. Rogers Kniffen Worldwide Enterprises, a New York City-based equity research and financial management consulting firm specializing in retail. “The restaurant wage component is rising.”

The retail real estate industry has already experienced a huge rush into the restaurant space, Kniffen notes. Whether fast casual or sit-down, the bloom has come off the rose a bit, he says.