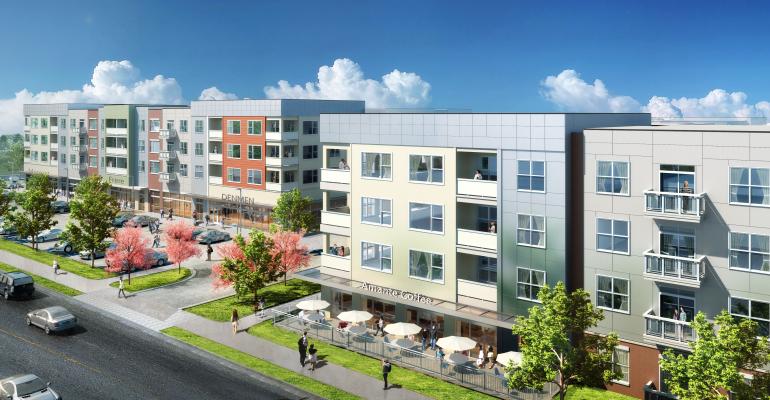 Lifestyle centers were the stars of the retail development universe in the 2000s. Shoppers flocked to these properties, which typically featured a single-story, open-air design and upscale tenants. Since the recession, however, only a few of these centers have been built, and it’s unlikely that more of them will come out of the ground. Instead, developers are focusing their energy on larger mixed-use projects with some lifestyle center elements.

Today, Poag Shopping Centers has two projects in its development pipeline that are scheduled to break ground by January 2015, and neither one is a classic lifestyle center, according to Josh Poag, the company’s president and CEO. The first project, The Outlet Shops of the Mid-South, is a 330,000-sq.-ft. outlet center. The second, Highland Row, is a mixed-used development near the University of Memphis that features 30,000 sq. ft. of ground-floor retail with 350 apartments above.

“Mixed-use development is very intriguing to us,” Poag says, adding that it incorporates the best elements of lifestyle centers. “I think we’ll probably do more of it.”

That’s not to say that Poag Shopping Centers is abandoning its roots. It has acquired four lifestyle centers since the recession began, and today it owns and/or manages a portfolio of eight lifestyle centers across the nation.

As a long-time player in the lifestyle center sector, Poag has witnessed the evolution of the format, particularly as it relates to tenant mix. “A lot of the tenants that opened in our first lifestyle center don’t exist anymore—Bombay Company and Coldwater Creek, for example,” he says. “We’re replacing them with retailers that are new to lifestyle centers.”

H&M, for instance, recently inked a deal for a store at Carriage Crossing in Collierville, Tenn., according to Poag. His firm, along with DRA Advisors, bought the 712,000-sq.-ft. property in 2012 for $55 million.

Josh Beyer, senior vice president with The Sembler Company, says the most successful lifestyle centers have reinvented themselves by changing the tenant mix. “Innovative owners have figured out a way to replace the tenants they lost during the recession,” he contends.

Companies like Sembler and Poag have welcomed tenants that contribute to the overall experience—restaurants and movie theaters, for example—along with health and wellness tenants, such as dentists and yoga studios and service retailers, such as laser hair removal and massage therapy.

“Specialty retail is hard right now, and these other uses are a diversifying strategy,” Beyer points out.

By leasing to non-traditional tenants, lifestyle center owners have managed to keep their occupancies up. Most research firms lump lifestyle centers in with other property types, so tracking accurate occupancy rates is difficult. However, Poag estimates the industry-wide occupancy rate to be in the low to mid-90 percent range.

Meanwhile, rental rates at lifestyle centers vary widely, from the low $20s to as high as the mid $50s per sq. ft. These rates are lower than they were when lifestyle center development was at its peak, Beyer says.

“A lot of centers had to mark their rent to market,” he explains. “Lifestyle rates are still higher than grocery-anchored centers or power centers though.”

Tenant mix and rental rates aren’t the only leasing-related changes that have occurred in the lifestyle center sector. Today’s owners are avoiding the co-tenancy agreements that harmed so many properties during the recession.

“A lot of the lifestyle centers that were developed in the 2000s were built by inexperienced developers who were giving great co-tenancy deals to retailers, but shooting themselves in the foot,” Poag says. “During the recession, tenants were bolting left and right.”

Many of those centers now have new owners that have extensive experience in the sector. By and large, they’ve managed to untangle the co-tenancy mess.