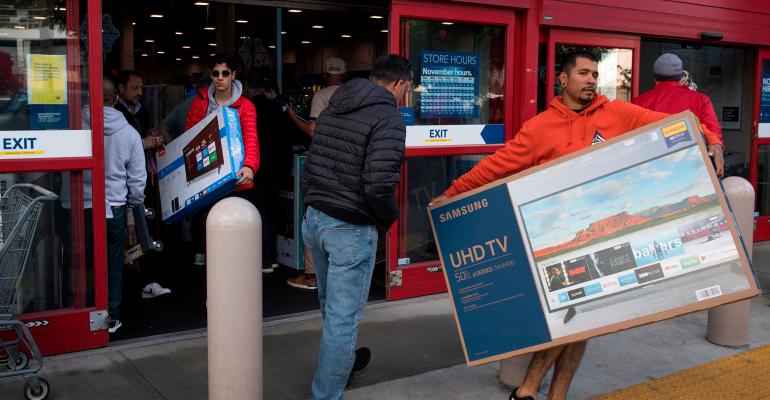 The more retailers can push consumers to purchase early and smooth out the December bump of holiday shopping, the better goods will flow.

(Bloomberg Opinion) -- A few decades ago, it was taboo to put holiday merchandise out before Thanksgiving. Retailers wanted to keep the focus on that massive shopping day after Americans stuffed themselves with turkey — one giant sales bonanza that they counted on to turn their ledgers from red ink  to black. Hence the tradition of Black Friday.

The  taboo has long been broken as stores offer up holiday wares earlier and earlier each year; Costco Wholesale Corp. was selling artificial Christmas trees at stores in August. Now, putting holiday merchandise out before Thanksgiving is generally accepted, and even Halloween gets crowded out by Christmas decorations taking shelf space.

This may be disheartening for traditionalists, but it’s definitely a good thing for a weary supply chain. The more retailers can push consumers to purchase early and smooth out the December bump of holiday shopping, the better goods will flow. Holiday sales creeping into October is a winner for United Parcel Service Inc., FedEx Corp. and Amazon.com Inc., which swell up their delivery capacity for six weeks each year to handle the spike in shopping. If demand is on a more even keel, the need for extra workers and warehouse space diminishes. Retailers wouldn’t have to hire as many temporary workers, either.

The result was that UPS and FedEx’s delivery volume surged in October and November compared with a year earlier and then petered out in December. Overall, month-on-month retail sales fell 2.5% in December after rising 1.8% in October and 0.2% in November, according to Census Bureau data.

The buy-early campaign should be repeated this year to build on the good habit of spreading out e-commerce and in-store sales over two or three months instead of a shopping frenzy crammed into a few weeks at the end of the year. For an idea of how much stress this short peak season puts on delivery companies: UPS just announced plans to hire 100,000 temporary workers for this holiday rush, the same as for the last couple of years.

The hefty e-commerce demand during the pandemic, especially for the holidays, allowed both UPS and FedEx to boost prices on deliveries by more than 20% since 2019. Both couriers have put limits on the package volume they take from large retailers, leaving retailers scrambling for alternatives to deliver their e-commerce merchandise. Startup gig delivery companies, such as AxleHire and Veho, sprung up to fill the need. Even food delivery companies like DoorDash jumped into parcel service. If more of those deliveries were made in November and October, retailers wouldn’t be at such a disadvantage in December.

The convenience of e-commerce has taken root so we'll still see growth in package-delivery during the traditional peak season, even as more people shake off the pandemic and return to stores. But it will be a more normal pace, says Marc Gorlin, who founded and still operates same-day delivery company Roadie, bought by UPS last year.

Retailers will be motivated to move early on holiday discounts because consumers’ budgets are being squeezed by inflation, Gorlin said in an interview. Retailers also are keen to move out merchandise to reduce swollen inventories.

Retailers got a head start on bringing in merchandise this year. Retail imports, measured by shipping containers, rose more than 5% in the first six months of 2022 compared with the first half of 2021, according to the National Retail Federation. In July, retail containers fell from a year ago, marking only the third decline in two years as consumers spent heavily during the pandemic. The volume is expected to slide 3.2% in the second half of 2022, the federation said. 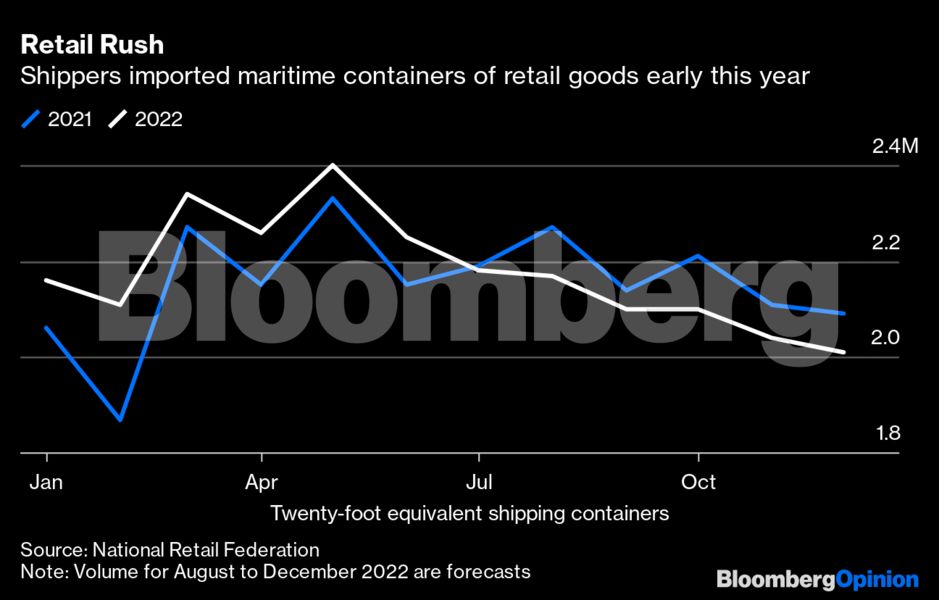 That should provide some additional relief to the supply chain, which is certainly functioning better now than last year, but has lingering snags. Warehouses are stuffed with goods and often lack workers to unload truck trailers quickly. The railroads are struggling with poor service, which gums up the movement of shipping containers and can cause congestion all the way back to ports.

This year’s port congestion has migrated east, hitting Savannah, Georgia, especially hard, as shippers divert freight from the West Coast in fear of a potential dock workers strike over contract negotiations. Even more menacing is a possible rail strike if the unions can’t reach a labor-contract deal with more than 30 railroads by Sept. 16. Either of those events would ruin the holidays.

Whether it's to get ahead of the competition on holiday discounts, reduce inventory or to keep package delivery expenses in check, it makes sense for the holiday shopping season to start right about now. Next year, too. This should become the new tradition, replacing the news frenzy over crazed shoppers fighting over large screen TVs at a discount store on the day after Thanksgiving. Black Friday and even the newest version, Cyber Monday, have run their course. The December sales lump needs to be permanently smoothed.

To contact the author of this story:
Thomas Black at [email protected]