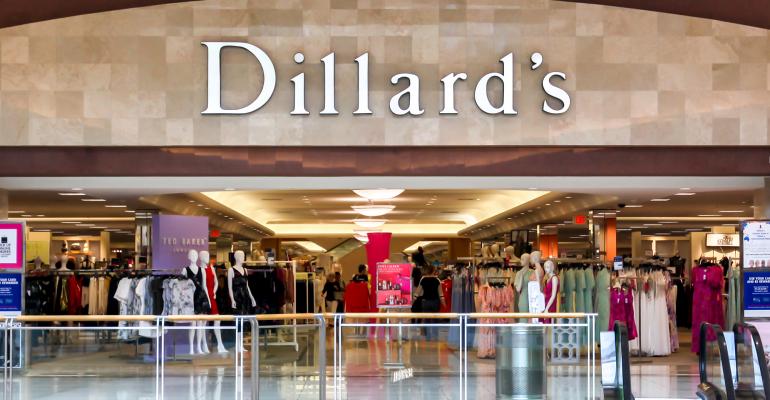 Department store Dillard’s Inc. is benefiting from lean inventory that is taking away the need for discounting.

(Bloomberg)—Dillard’s Inc., the 83-year-old department store, has soared 420% this year, and its thanks in part to its ability to manage a global supply chain snafu amid a jump in customer demand.

Dillard’s soared as much as 23% on Thursday to a record $364.08 after quarterly results blew estimates out of the water. The company’s stronger-than-expected gross margin were likely fueled by strong consumer demand and ongoing supply chain issues that actually benefit retailers, according to Vital Knowledge founder Adam Crisafulli.

“The supply chain crisis is helping some retailers by making inventory levels very, very lean which means they don’t have to discount as much -- and discounting usually is a margin killer,” Crisafulli said by phone.

The company reported third-quarter retail gross margin of 46.7% compared to 36.6% the year prior. Dillard’s credited the gross margin improvement to both strong consumer demand and better inventory management, which led to decreased markdowns for the quarter.

Dillard’s is now worth roughly $7 billion, a massive run-up compared to the $1 billion value it carried a year ago. That means the company’s size rivals that of companies like Alaska Air Group Inc. and Western Union Co.

The waning following of sell-side analysts paired with a shrinking number of shares available for trading are also likely drivers of the stock’s 2021 rally. Just three analysts follow the stock and the number of shares available for trading has shrunk to 5.6 million, less than a third of the 16.6 million outstanding shares as the company has continued to buy back shares, according to data compiled by Bloomberg.

Dillard’s position as a construction business attached to a retailer makes it both unique and “pretty obscure,” according to Crisafulli, who said large insider ownership paired with the low float makes it less likely to be a target of most institutions. Insiders hold roughly a quarter of the stock and account for five of the 11 largest investors, Bloomberg data show.

Elevated bets against the retailer may also be driving the latest rally with more than 12% of shares available for trading currently sold short, according to financial analytics firm S3 Partners.

Broader investor excitement spread to other retailers like Macy’s Inc. and Nordstrom Inc. on Thursday as the pair each rose more than 4%. Macy’s will report quarterly results next week with Nordstrom’s update coming on Nov. 23. “They’re a dying breed,” said Crisafulli, calling Macy’s “really your last publicly traded department story.”

Dillard’s trading volume is tiny compared to peers. Roughly 371,000 shares have changed hands on average this year, that compares to nearly 18 million for Macy’s and 4 million for Nordstrom.

Dillard’s also stands out compared to peers when it comes to the amount of sales it generates from in-store purchases: Nearly 90% of sales in 2021 have been driven by purchases at physical stores, according to M Science data. That compares with 69% for Macy’s and less than half for Nordstrom’s family of businesses, the analytics firm says.

--With assistance from Janet Freund.