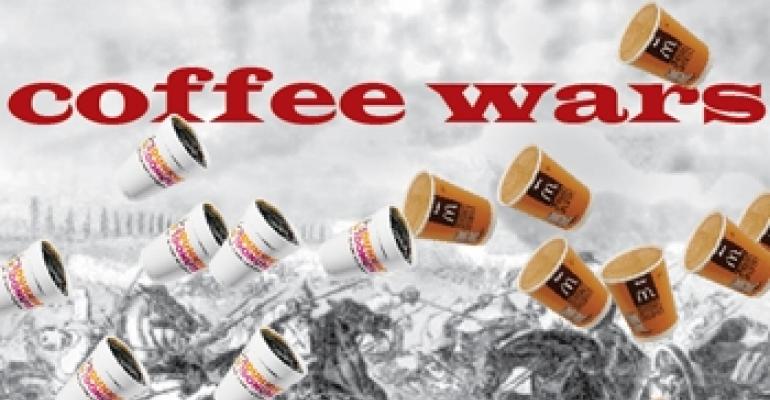 Round and round they go.

For years, Starbucks, Dunkin Brands Inc. and McDonald’s have battled to control the U.S. coffee market. All three have come up with new tricks and treats along the way and have had missteps in the process. But the battle rages on. And as it does, it has implications for real estate investors—especially those targeting net lease assets or small strip centers where the chains typically locate.

All three firms have recently reported their latest financial performance with some mixed results.

During its third quarter, Dunkin’ Brands Inc. saw its revenue increase 9.8 percent compared with the same time period in 2011. In addition, its adjusted operating income jumped by 14 percent and adjusted net income rose by 63 percent.

Meanwhile, McDonald’s Corp.’s third quarter profits (which include much more than its coffee sales) continued to show the effect of the weak economy and declined by 3.5 percent on flat revenue compared with the same period last year.

All three are continuing to try and find ways to expand as well. For example, Starbucks is aggressively pursuing 523-sq.-ft. drive-through locations for its Seattle’s Best Coffee division. The units will be operated by franchisees and will be located mostly on empty suburban lots. In addition, Starbucks would like to add 1,000 new locations in the U.S. in the next five years.

For its part, Dunkin’ Brands has visions of doubling the number of stores it operates by 2032.

“Dunkin’ is not just about donuts, they now have an egg sandwich, but Starbucks has an egg white wrap in wheat bread,” Rose says. “It’s the same product it just appeals to a different buyer pool.”

That translates into how investors view the three chains. In addition, the credit quality of the underlying firms is also crucial. On that front, “Dunkin’ is getting there,” Rose says. “As they open more stores, increase product sales volume, they’ll be sought after by the investment market and I’m pretty sure the [ratings agencies] will reward them.”

As it stands, Starbucks is still viewed as the gold standard for anchoring retail centers.

A question that looms: With the three-way battle continuing to brew, is there any room for another coffee contender?

Regional chains including Gloria Jean’s, which operates 1,000 stores worldwide, and Peet’s Coffee & Tea, which was acquired Oct. 29 by Joh. A. Benckiser for about $1 billion, don’t have the same reach as the three heavyweights. But it’s possible that one day they could be in the same league, even if it is an uphill battle.

“If a developer has a choice between three names of companies that are not dominant versus a Starbucks, they’re going to go with that tenant type,” Rose says. “That can be a problem for that next new concept coming out.”

But Rose says a similar battle played out in the hamburger market. For years, consumers had no idea there was anything beyond McDonald’s. Over the years, customers saw the entrance of new competitors including Burger King and Wendy’s. More recently, chains such as Five Guys, In-N-Out Burger have started expanding.

“It’s hard to know,” Rose says. “What we’ve always expected in retail is that it’s about constantly reinventing to meet consumer demands.”