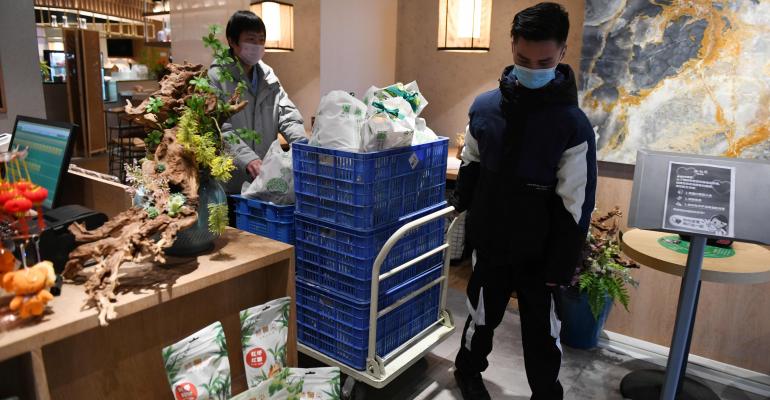 China Urges Officials to Dine Out and Shop to Boost Consumption

Data released Monday showed retail sales in the world’s second-biggest economy plunged 20.5% in the first two months of the year.

(Bloomberg) -- Local officials in China are being encouraged to take the lead in patronizing restaurants and shopping malls that are opening after weeks of being shut down amid the coronavirus outbreak, part of a push to get its economy back on track.

In provinces such as Anhui, Jiangxi and Jiangsu, government notices urged officials to spend money on food or shopping and encourage their friends and family to do the same. While the number of virus infections in China has tapered off in recent days, many residents are still hesitant to leave their houses after weeks of government warnings about the dangers of mingling with others.

Data released Monday showed retail sales in the world’s second-biggest economy plunged 20.5% in the first two months of the year, with the catering sector tumbling 43.1%. The pace of recovery in dining, travel and retail spending is a crucial gage for how consumer sentiment is rebounding in China as the epidemic appears to come under control.

Last week, Jiangxi’s Department of Commerce told its officials to lead the way by spending on food and beverages and to encourage their relatives and friends to do the same, stressing that the money should come out of their own pockets.

Anhui’s commerce department issued a similar notice on March 12, adding that making purchases online or over the phone is advised to prevent infections. A district in Jiangsu said last Tuesday that officials should spend no less than 100 yuan ($14) within the week.

There are some signs that life is returning to China’s consumer market. Store traffic is creeping back up in luxury malls and boutiques after falling as much as 80% at the virus outbreak’s peak there earlier this winter, hammering sales of brands ranging from Burberry Group Plc to Kering SA’s Gucci.

Officials can help “send a clear signal to convey confidence with actual actions and express support to return to work and production” by taking the lead in boosting consumption, the official Xinhua News Agency said in a commentary.

The article was posted on one of its WeChat accounts Friday after some social media users criticized the consumption-boosting initiatives as simply being for show amid enormous pressure from Beijing for local governments to get companies back to work.