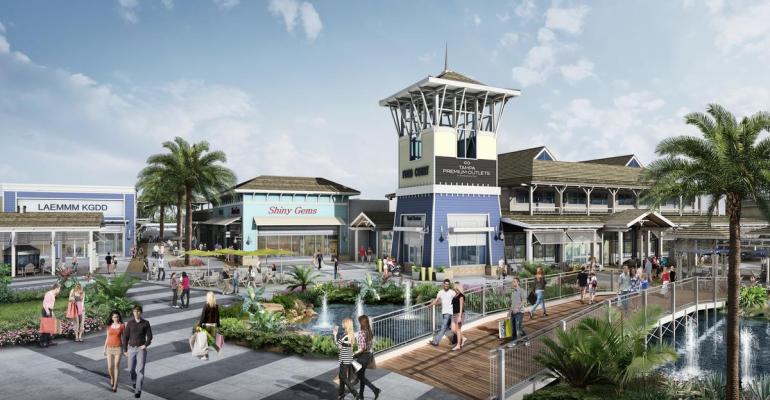 Can Outlet Center Operators Avoid the Worst of the U.S. Retail Fallout?

This September and October, Tanger Factory Outlet Centers' stock price was hovering at or around a five-year low of $23 to $25 per share.

Wall Street has walloped the retail industry during the much-hyped “retail apocalypse,” and the country’s two biggest operators of outlet centers—Simon Property Group and Tanger Factory Outlet Centers—have not been spared.

However, some observers think outlet centers—and the REITs that own them, like Simon, Tanger, Macerich and Taubman Centers—don’t belong in the same cart as regional malls. That’s not to say, though, that outlet centers are immune to some of the challenges haunting the retail sector.

One reason for the stronger performance of outlet centers, Leach says, is that they’re not weighed down by sagging anchors like J.C. Penney, Macy’s and Sears. Rather, outlet centers enjoy a relatively balanced mix of retailers, and they’ve largely escaped the recent spate of store bankruptcies and shutdowns—even though a fair number of outlet tenants compete in the battered apparel sector.

Even if outlet centers do lose tenants, backfilling the vacated space is easier because none of those tenants serve as anchors, Leach adds.

Another reason for the upbeat outlook for outlet centers, she says, is that they offer bargains. A study published in 2015 by researchers at Northwestern University and the University of Texas at Dallas found outlet stores sell similar, but lower-quality, apparel versus what’s available at traditional stores at an average discount of 40 percent.

“People are still budget-conscious and don’t like high price tags,” Leach says. “Outlet shopping offers consumers the opportunity to shop for goods at discounted rates. Those shoppers are loyal customers and will shop at their favorite outlet store more frequently.”

According to a February 2017 survey by financial services firm Cowen & Co., nearly one-fourth of American adults said they’d shopped at an outlet center during the previous 30 days. In fact, the survey showed 14 percent of Americans would rather shop at outlet centers, compared with 18 percent who prefer shopping on Amazon and 40 percent who prefer to shop at department stores.

While e-commerce in general and Amazon in particular threaten brick-and-mortar retail, Leach believes outlet centers “can hold their own” thanks to low prices.

“When going to the outlets, shoppers automatically have the perception they are getting a good deal,” she says. “Outlet shopping offers the treasure-hunting experience, and the thrill of a deal will keep customers coming back.”

Yet a June report from Cowen could spell trouble for the outlet sector.

Regional malls have been feeling pressure for some time, Cowen notes, but the traffic fall-off at off-price stores and outlet centers is a more recent phenomenon. That weakness might be due to factors such as shopper fatigue before back-to-school season or a shift in consumer spending on apparel and footwear, according to Cowen.

In April, Cowen released a report that suggested shopping at outlet centers will continue to gain traction, given the centers’ strong “value proposition,” as well as outlet retailers’ commitment to improving product quality and selection.

Whether outlet centers are flourishing or fading—depending on how you interpret Cohen’s research—outlet center operators are forging ahead with ground-up and renovation projects.

Simon, for example, has undertaken a multi-billion-dollar program to upgrade all types of properties in its portfolio, including outlet centers. Among the outlet projects are a recently completed expansion at Woodbury Common Premium Outlets in Woodbury, N.Y., and planned additions at Allen Premium Outlets in Allen, Texas; The Mills at Jersey Gardens in Elizabeth, N.J.; and Sawgrass Mills in Sunrise, Fla. Also, Simon broke ground this summer on Denver Premium Outlets in Thornton, Colo.

This October, Tanger debuted Tanger Outlets Fort Worth in Fort Worth, Texas. The REIT’s executives say the center was around 93 percent leased when the grand opening took place; tenants include outlet-center fixtures including Banana Republic, H&M, Levi’s, Nike, Restoration Hardware and Tommy Hilfiger.

In all, Tanger reported in August—before the Fort Worth opening—that over the past six years it had opened 11 outlet centers, expanded seven centers and bought another seven.

As it stands now, though, few new outlet centers or outlet-center renovations are in the pipeline in the United States.

Nonetheless, Steven Tanger, CEO of Tanger Factory Outlet Centers, told Wall Street analysts in August that his REIT is in a strong position to face the retail industry’s headwinds, as outlet locations remain “an important and profitable channel” for tenants.

“Our industry is not overbuilt,” said Tanger, noting that outlet stores occupy about 70 million sq. ft. in the U.S., compared with more than 7.5 billion sq. ft. for other retail properties.

Nikki Baird, managing partner at Miami-based RSR Research, which specializes in retail research, says she doesn’t expect the popularity of outlet-center shopping to translate into full-fledged build-outs. Still, she’s optimistic about the future of the outlet industry.

“We’re already way over-stored, and I wouldn’t be surprised if there are opportunities to convert dying or empty strip malls into outlet malls without having to build new ones,” Baird says. “But between full-price retail concepts and discount ones, I would definitely place my bet on the discount side for the near future.”