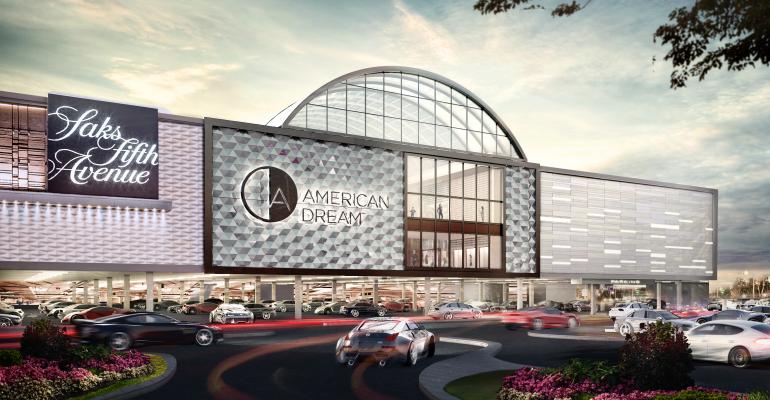 Can the American Dream Mega-Mall Succeed in a Changing Retail World?

The American Dream project in New Jersey is betting big on entertainment components. Can it succeed?

After more than two decades years of starts and stalls, countless developers and several anticipated opening dates, the often tight-lipped Triple Five Corp. announced last month that the $5 billion American Dream mega-mall in the New Jersey Meadowlands will open Oct. 25. Or at least portions of it will.

The press release didn’t specify how much of the 3-million-sq.-ft. project would be open for visitors on that date. Previously, developer Triple Five said the opening would be phased with some tenants/attractions opening in the fall of 2019 and others around the holiday shopping season and into 2020.

The mega-mall, formerly known as Xanadu, is located along the New Jersey Turnpike and Route 3 in East Rutherford, next to the Giants’ MetLife Stadium. The new shopping/entertainment complex will boast more than 450 tenants.

The project has been fraught with financial and legal issues. Triple Five is investing $3 billion in the development, over and above the $2 billion in work completed by the previous developers—Mills Corp., which has since been acquired by Simon Property Group, and then Colony Capital.

The completed  project is also slated to have a Sea Life Aquarium, KidZania, a Legoland Discovery Center, a giant observation wheel, a luxury movie theater, and six atriums including one with a “sprawling garden of bird-filled aviaries and bunny rabbit fields,” according to a release.

Triple Five also owns the giant Mall of America in Bloomington, Minn., and the West Edmonton Mall in Alberta, Canada, and is developing an American Dream mall in Miami.

Over half will be entertainment

American Dream will also boast more than 20 full-service restaurants, a Coca‐Cola “Eats” Food Court and America’s first Kosher food hall. It was just announced that Hard Rock Café will open a location at American Dream, as will It’Sugar, a specialty candy store that will span 22,000 sq. ft. over three levels.

Will this mix work in the changing retail environment?

“Don’t try to put this project into any of the baskets you’re most familiar with,” says Nick Egelanian, president of SiteWorks Retail Real Estate Services, a retail real estate consultant firm based in Annapolis, Md. “Yes, it’s called a mall but don’t think of it as a mall. Really there’s nothing like it. This is a complex that has the most dollars invested in entertainment of any project in the United States,”

In addition, American Dream “has the most diverse range of retail of any project in the United States,” Egelanian adds. “This project has luxury retail and it will have some stuff like Old Navy. So, ski hills, swimming pools, roller coasters and Tiffany’s and Old Navy all under one roof. What do we have that even remotely fits into that template? Nothing.”

Egelanian meets with a group of top industry experts every month and polled them on their thoughts on American Dream.

Some experts question whether that area needs another upscale fashion destination, with its proximity to Manhattan and The Mall at Short Hills, notes. American Dream’s luxury retail section might be at most risk. American Dream is likely to become a tourist destination, but there will be “pockets of retail, perhaps large pockets, that are not successful.”

“What are its chances of success? Your guess is as good as mine, because the best experts I know can’t reach a consensus,” he says. “What it’s going to come down to is the spectacle of this alone. Is it enough to move people’s shopping patterns?”

Support for the mega-complex

Local officials remain optimistic about the project’s chances of success. For example, Jim Kirkos, president and CEO of the Meadowlands Chamber, is supportive of the long-awaited development.

“American Dream Meadowlands most certainly makes us a primary destination, and while I’m supportive of Triple Five and the product, I’m also responsible for the success of the entire region,” he says.

“We believe we can leverage the success of that project and make sure that [visitors] find their way to local hotels and downtown shopping and restaurants and entertainment, and we use this as a means of drawing new visitor dollars to the Meadowlands, as opposed to just being the cheap alternative to Manhattan.”

Kirkos acknowledges that there are skeptics.

“I think what people don’t understand about the Ghermazeans is they’re a privately-held firm and they’re quiet about what they do—but they’re real pros,” he says. “So many people have come to the conclusion that we’re not going to be a success that there’s not much that we can do other than open and show them that we’re going to be a success.”

Kirkos also says Triple Five isn’t cutting any corners.  “As long as it has taken them to do it, they refuse to cut a corner and they’re building a quality product,” he notes. “So, I’m going to stand next to them.”

What does it take for regional malls, in general, to be successful?

“It’s updating, bringing in innovation and new concepts and new tenants,” says Michael Schwartz, principal at RSM US LLP, who heads up the real estate advisory practice for the firm. “Regional malls were just becoming too overbuilt and too stagnant and weren’t bringing in anything new.”

In order for malls to survive these days, Schwartz says many landlords are taking back failed department store spaces and redeveloping them as multifamily, hotels, medical office and fitness centers.

“We’re seeing all of these new concepts within the last three to five years that have evolved to allow the use of the regional mall to be more expansive and experiential,” Schwartz notes. “People are going there much more for destination purposes.”