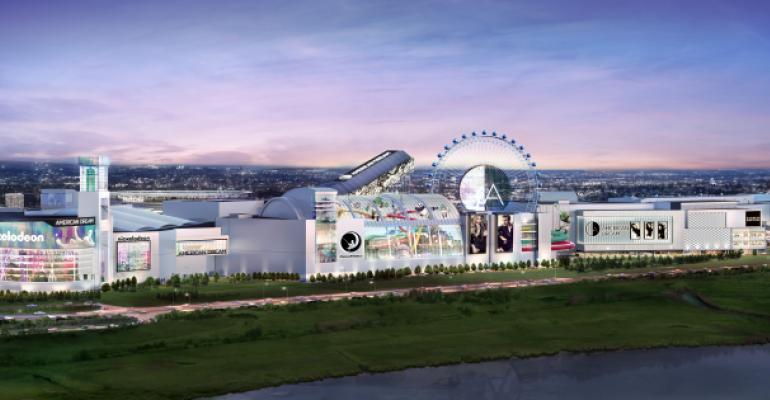 If the American Dream Mall attracts even a fraction of its expected traffic, it could be bad news for nine nearby malls.

(Bloomberg)—The malls of northern New Jersey, go-to destinations for shoppers from nearby New York City for more than half a century, are trying to find ways to stand out as a colossal new neighbor arrives to compete for customers -- and their dollars.

After 16 years of false starts and multiple developers, the American Dream retail and amusement complex in New Jersey’s Meadowlands is scheduled to open its doors on Oct. 25. Owner Triple Five Group is expecting 40 million visitors a year once the full mall is up and running, and if it attracts even a fraction of that traffic, it could spell bad news for some of the nine nearby malls already competing for the greater New York metropolitan area’s flushest residents.

“There are shopping centers that are underperforming, and I think those are the ones that need to worry,” said Poonam Goyal, an analyst at Bloomberg Intelligence. “Some of the smaller malls that are just surviving, with American Dream opening, they may have more struggles ahead of them.”

Although brick-and-mortar shopping overall has been on the decline amid competition from e-commerce, with long-time anchor stores like Sears and J.C. Penney Co. leaving big holes in malls around the U.S. as they reduce their retail footprints, many shopping centers in Northern New Jersey have had a pretty successful run. That’s partially because the state doesn’t charge sales tax on clothing, a welcome relief from the 8.875% rate shoppers will pay for large purchases over the Hudson River in nearby Manhattan.

That’s helped fuel continued demand for malls in the Garden State, even as similar complexes wither in other regions of the country. The town of Paramus, New Jersey, for example, has boasted having the busiest retail ZIP code in the country, despite being located in Bergen County, the last in the state with “blue laws” that keeps many retailers closed on Sunday.

The question is whether that changes once the doors open at American Dream, which will open in stages -- first the theme park and ice skating rink, with the retail component ramping up early next year. Its 3 million square feet (279,000 square meters) are 45% retail and 55% entertainment, including what it calls the Western Hemisphere’s biggest indoor theme park, North America’s only indoor snow skiing and a DreamWorks water park.

To fend off American Dream’s encroachment, malls in the area are increasingly looking beyond retail for ways to ensure consumers keep visiting and spending.

The Mall at Short Hills in Millburn, for example, about a half-hour drive from American Dream, says it’s not worried about the new competition, according to Jamie Cox, its general manager. That’s because it offers high-end services and experiences that enhance its appeal beyond just the merchandise itself.

“Setting ourselves apart doesn’t necessarily have to do with the big roller coasters that American Dream is working on; it has to do with a differentiated shopping experience,” Cox said in a phone interview.

He said American Dream will be hard pressed to match features like the VIP lounge in its Chanel boutique and Canada Goose’s “cold room” where shoppers can test the company’s luxury coats in temperatures as low as -25 degrees Celsius (-13 Fahrenheit).

“Our customers might go there once or twice for entertainment purposes, but when they want to shop they’re going to come to Short Hills,” he said.

Analyst Goyal agreed that other nearby malls, at least the higher-end ones, may still offer something American Dream can’t. “You go to American Dream for the entertainment. But I think if you want to go purchase something, you may not want that bigger presence where you might get lost,” she said.

Garden State Plaza in Paramus, a 20 minute drive from American Dream, is also hoping it has differentiated itself enough that the new entrant won’t make much of a dent. Garden State Plaza aspires to be a “mini city” according to Ghadi Hobeika, the U.S. Chief Marketing Officer for Unibail-Rodamco-Westfield, the mall’s owner. The result, when finished, will be a mixture of residential spaces, public gathering areas, restaurants and traditional retail, he said.

The shopping center, which preceded American Dream as the largest in New Jersey, has features normally associated with high-end hotels: valet parking, plus a concierge service. Its long corridors are dotted with abstract sculptures and mini gardens. Lounge areas, furnished with crocodile print wingback chairs, are located under the mall’s many skylights.

Karen Bednarz, a sales development coach from Hawthorne, New Jersey, was taking a break from shopping with her daughter at one of these lounge areas on a recent work day. While she said she appreciates Garden State Plaza’s amenities and the large selection of stores, she still thinks the spectacle of American Dream will attract a crowd -- at first. But the novelty may wear off.

”It’s like the Stew Leonard’s that opened up last month,” Bednarz said, referring to the specialty grocer that drew thousands on its opening day at nearby Paramus Park. “American Dream’s going to attract a lot of people because it’s brand new, but that newness will go away eventually. Unless it has something that you can’t find anywhere else, it may lose its sizzle.”

And even if it doesn’t, it’s possible American Dream actually does some of its nearby rivals an unexpected favor, said Transwestern’s Rizzuto.

“It will have a large enough reach that people from Pennsylvania and Connecticut will come to see it at least once,” he said, predicting a possible spillover effect where millions of new visitors spend time at other shopping centers. “It will draw a lot more people than the area is used to, which should result in spending at the other malls in the area.”

--With assistance from Kevin Varley.

To contact the reporter on this story: Donald Moore in New York at [email protected].