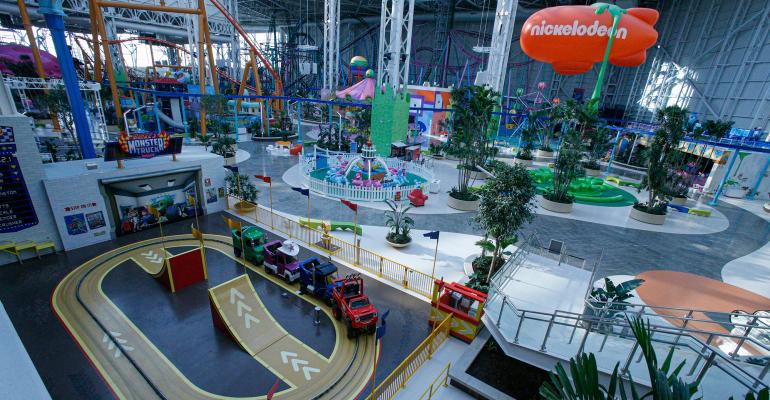 The mall did not make an $8.8 million payment on municipal bonds that was due Monday.

(Bloomberg)—American Dream, the $5 billion mall and entertainment complex in New Jersey’s Meadowlands, failed to make an interest payment that was due Monday on municipal bonds sold to help finance the venture.

The more than 3 million-square-foot destination mall, which features an indoor ski slope, amusement park and water park, did not make an $8.8 million payment that was due, according to a regulatory filing.

“The trustee has not received any revenues for payment of the August 1 debt service, and the reserve account does not have sufficient funds to make such payment,” the filing said.

About $290 million of muni debt issued for American Dream is backed by New Jersey economic development grants based on sales-tax collections. As of early July, New Jersey’s Economic Development Authority hadn’t approved documents certifying project expenditures by the developer Triple Five Group. Those documents are needed to release the grants.

Failure to make a payment on the so-called grant-revenue bonds doesn’t constitute a default nor does it require the borrower to pay back the loan immediately, according to bond documents.

American Dream, located across the Hudson River from New York City, opened the doors of its entertainment complex in October 2019, almost two decades after a mall on the site was first proposed. Five months later, the pandemic spurred lockdowns to contain the public-health emergency and postponed the opening of the mall’s retail stores until October 2020.

The mall previously tapped debt-service reserves to pay bondholders, but the reserves were almost completely exhausted by a Feb. 1 interest payment. The balance of the reserve account stood at $862.12, the filing said.

Melissa Howard, an American Dream spokeswoman, didn’t have a comment, nor did Nuveen LLC, the biggest holder of the bonds.

American Dream qualified for the state grants because its location is designated as an economic redevelopment area. The grants, for as much as 75% of incremental sales-tax revenue collected each year, are capped at $390 million over a 20-year period.

Bondholders have criticized American Dream for not filing the project-cost paperwork with the state sooner. American Dream hired an auditor to complete the cost statement in March 2021, but as of January hadn’t submitted it to the state, according to a letter from bond servicer Trimont Real Estate Advisors.

In addition to the grant-revenue bonds, American Dream also has $800 million of muni debt backed by fees that the mall’s owner makes to bondholders instead of paying property taxes, known as payments in lieu of taxes.

The mall also has $1.7 billion in construction debt. Triple Five is seeking a four-year extension to repay the obligation, Bloomberg News reported in February.

--With assistance from Elise Young and Hadriana Lowenkron.