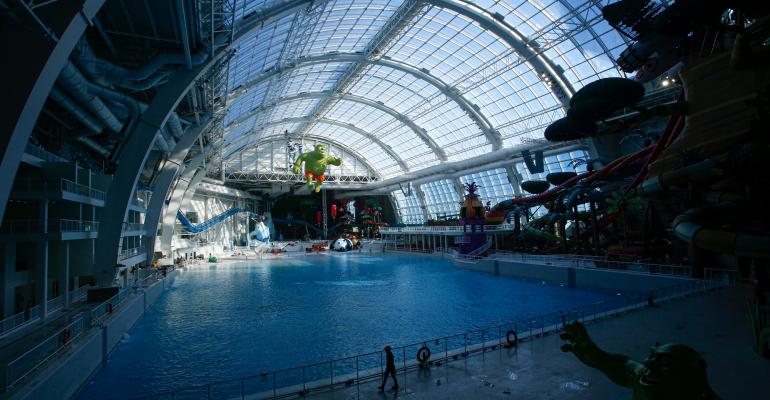 (Bloomberg)—American Dream, the $5 billion super mall in New Jersey’s Meadowlands, drained a reserve fund to make a bond payment as it struggles to attract shoppers and tenants with the pandemic set to begin its third year.

The 3.5-million-square-foot shopping and entertainment complex, which features an indoor ski slope, amusement park and water park, nearly emptied a reserve account to make a $9.3 million payment due Tuesday on about $290 million of debt supported by sales tax receipts, according to a securities filing. About $820 is left in the reserve fund, the filing said. It’s not clear whether American Dream will make its next payment on the securities, due Aug. 1.

Failure to make a payment on the sales tax debt doesn’t constitute a default nor require the borrower to pay back the loan immediately, according to bond documents.

However, the filing disclosing the reserve draw included a letter from bond servicer Trimont Real Estate Advisors saying American Dream wasn’t complying with obligations under the bond documents to provide updates on project costs and performance. Remedies for the breach “range from specific performance to a special redemption of all the bonds,” the letter said.

“The developer has provided Trimont with minimal information despite specific requests for additional items reasonably necessary to accurately track and understand certain aspects of the project’s performance,” Trimont said in the Jan. 18 letter.

Developer Triple Five Group also sold $800 million of muni-debt backed by payments they agreed to make to bondholders instead of paying property taxes. The project has another $1.7 billion in senior and mezzanine construction debt.

“Given space completion and tenant occupancy delays (18 to 24 months behind initial developer projections), sales tax receipts are anticipated to miss projections for the near terms,” Nuveen LLC wrote in a note last year.

American Dream, located across the Hudson River from New York City, opened the doors of its entertainment complex in October 2019, almost two decades after a mall on the site was first proposed. Five months later, Covid-19 spread through New York and New Jersey, spurring lockdowns to contain the public health emergency and postponing the opening of the mall’s retail stores until October 2020.

Successive waves of the coronavirus have discouraged shoppers and tourists alike. Sales at American Dream amounted to about $220 million for the first three quarters of 2021, public disclosures show, about one-tenth of the $2 billion that a 2017 forecast projected it would bring in during its first year of operations.  The mall was just 77% leased as of Jan. 1 and leases for another 5% of the mall are under negotiation, according to securities filings.

Melissa Howard, an American Dream spokeswoman, said the mall is “extremely pleased” with the early success of it’s retail and entertainment tenants.

“This year, American Dream will open over 100 new retail, entertainment and restaurant concepts,” Howard said in an emailed statement.   “We’ve recently announced several new deals and exciting concepts, including a two-story Gucci flagship, the opening of a 300-foot observation wheel overlooking the NYC skyline, a first-of-its-kind experiential entertainment and restaurant concept from Hasbro, and much more.”

American Dream is entitled to grants from New Jersey if the project meets sales-tax revenue targets. The grants, equal to 75% of sales tax receipts on mall purchases, cover expenses and debt service on a $290 million tranche of bonds.

However, American Dream hasn’t submitted the project cost statement and other materials to state officials that are required in order to receive the grant revenue, Trimont said in its letter.

“While everyone appreciates the difficulties caused by the pandemic, and the likelihood that grant revenue received now may not be sufficient to fully pay the bonds, that does not relieve the developer from responsibility to comply with its obligations under various agreements,” the letter said.

The Ghermezian family, which owns American Dream, have hired legal and financial advisers to help them cope with the New Jersey mall’s $3 billion debt load. Last year, the family lost 49% of their stake in Minnesota’s Mall of America and the West Edmonton Mall in Canada to American Dream’s construction lenders.

American Dream first dipped into reserves in August to pay debt on the sales tax grant bonds. Since then, the risk premium on bonds subject to federal income tax has increased by 0.5 percentage point. The tax-exempt bonds haven’t traded since last March.

On Oct. 5, $8.6 million of taxable bonds maturing in 2024, traded at a yield of 4.52%, about four percentage points more than U.S. Treasuries maturing in three years, according to data compiled by Bloomberg. On June 9, the same bonds traded at a 3.5% premium.

In December, the new owner of the revived Toys “R” Us, the toy store that went bankrupt and out of business, opened a flagship location at American Dream.

However, the mall’s indoor ski and snowboard slope, remains closed following a September fire and the operator hasn’t set a reopening date.