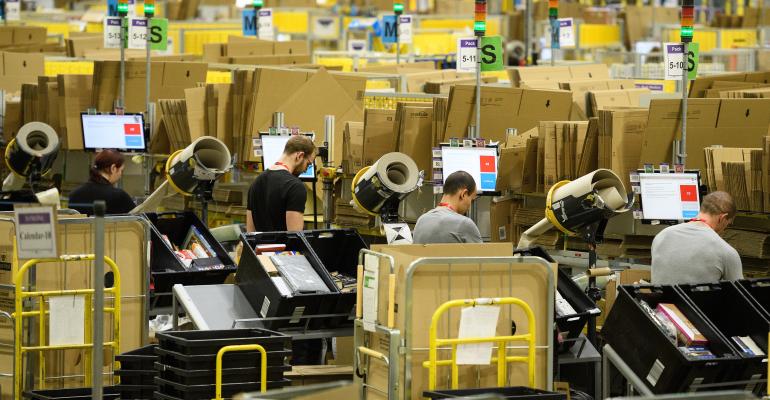 Amazon Is Saving Retail, Not Destroying It: Karl W. Smith

(Bloomberg Opinion)—Last week U.S. Treasury Secretary Steven Mnuchin argued that Amazon has “destroyed the retail industry across the United States” and so the Department of Justice is “absolutely right” to investigate it. Both of those premises are dubious: The U.S. retail industry is changing but is very much alive, thank you — and rewriting the rules of antitrust law would hurt the American economy.

First there is the matter of Mnuchin’s assertion about the retail sector. He is not wrong that brick-and-mortar retail sales are flat (if that’s what he meant by “destroyed”):

But what’s happening is a lot more complicated than e-commerce giants such as Amazon stealing business from mom-and-pop stores on Main Street. There is a larger trend at play, involving how Americans are choosing to spend their time as they grow older and wealthier.

A useful comparison may be the way the restaurant industry is changing the grocery business. Government statistics track “food-at-home expenditures” vs. “food-away-from-home expenditures” — basically, whether people eat in or dine out. Increasingly, they are dining out:

Restaurants Are the New Supermarkets

As Americans’ incomes rise, they tend to spend more at restaurants. Yet grocery stores still exist — in fact, the grocery-store experience is more varied than ever before.

This is not to say that pressure from the restaurant industry has had no effect on the grocery industry. It has, forcing a sort of bifurcation of the market: At one end, high-end grocers like Raley’s or Fresh Market have done well, and at the other end Walmart and Aldi’s have also experienced growth. It’s been harder on the middle-of-the-pack grocers. (E-commerce has had the same kind of hollowing-out-the-middle effect on retail.)

Yet there is no outcry that the rise of the restaurant industry is destroying the supermarket industry; it’s understood that these trends reflect decisions American consumers have made about how to spend their time. Similarly, the rise of e-commerce — and remember that Amazon, while the dominant player in e-commerce, still commands less than 5% of the retail market — is not destroying retail but simply responding to how Americans actually behave.

Mnuchin’s other assertion, that his colleagues in the Justice Department are right to look into Amazon, is more debatable and also more dangerous. For almost half a century, the main purpose of U.S. antitrust law has been to protect consumers, not rival producers. If a large corporation can offer better selection at lower prices than small businesses, that’s an improvement.

The courts didn’t always see it that way; for much of the 20th century, courts viewed bigness itself as a problem. A new wave of antitrust crusaders, who are getting a friendly ear in both the Trump administration and among major Democratic presidential candidates, are trying to revive this interpretation.

Yes, small-business creation and dynamism are both in decline in the U.S., but that appears to be a function of an aging society: Entrepreneurship is typically a young person’s game, while older consumers are more likely to be loyal to traditional brands. So it’s not surprising that the aging of America tends to naturally suppress both the supply and the demand for new businesses.

Entrepreneurial companies such as Amazon are the best answer to this type of slowdown. These companies are not destroying retail. Just the opposite: They are saving it.

To contact the author of this story: Karl W. Smith at [email protected].

To contact the editor responsible for this story: Michael Newman at [email protected].