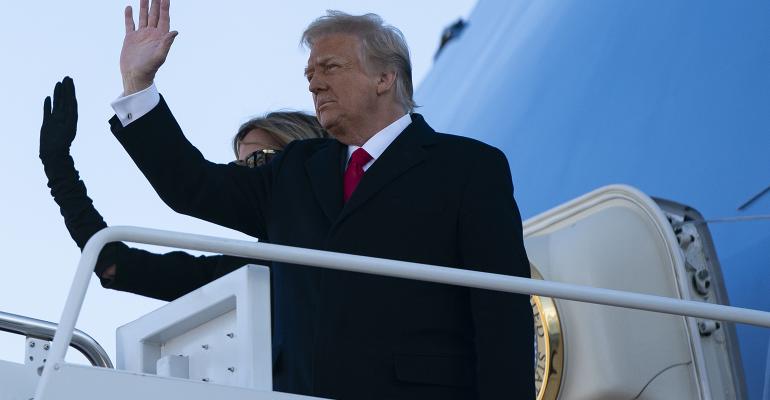 The pardon of David Tamman was one of more than 140 pardons and commutations the outgoing president announced shortly before the end of his tenure and Joe Biden's inauguration.

Among the 143 pardons and commutations President Donald Trump granted in the closing hours of his term was a full pardon for an attorney who had been sentenced to seven years in prison for obstructing investigations into a long-running Ponzi scheme conducted by one of his clients. According to the Justice Department, harmed investors lost $22 million as a result.

Trump granted the pardon for David Tamman, who was a partner with the firm Nixon Peabody during the period in question. His request was supported by the Aleph Institute, former FBI Director Louis Freeh and former U.S. Attorney Kendall Coffey, according to a statement for the Trump administration. It was one of many pardons announced early Wednesday, with other prominent names, including former Trump ally Steve Bannon, former Detroit Mayor Kwame Kilpatrick and others, including numerous individuals who were convicted and sentenced for nonviolent drug offenses.

“Mr. Tamman accepts full responsibility for his actions and numerous friends and colleagues have attested that he is a decent man who experienced a terrible lapse in judgment for which he has already paid a significant price,” a statement on Tamman’s pardon read.

In 2013, the Justice Department sentenced John Farahi, a radio show host and the principal at the Beverly Hills–based investment firm New Point Financial Services, to 10 years in federal prison for perpetrating a scheme to mislead investors. The previous year, he pleaded guilty to counts of mail fraud, loan fraud, selling unregistered securities and conspiracy to obstruct justice. Farahi defrauded investors by falsely promising to purchase bonds backed by the country’s Troubled Asset Relief Program (TARP) but used client funds for other means, including paying back previous investors.

Tamman assisted Farahi in covering up the scheme, according to the Department of Justice, which argued the lawyer helped protect Farahi over a long period of time by misleading investigators and obstructing an SEC investigation. During Tamman’s 2012 trial, prosecutors argued that as outside counsel for Farahi’s investment company, Tamman altered documents that led the National Association of Securities Dealers (the association that would later become FINRA) to close an earlier investigation into Farahi, leaving the scheme to continue unabated for several more years.

The Justice Department also revealed that in 2009, when the SEC was probing the case, Tamman and Farahi amended and created fraudulent securities offerings documents and promissory notes, in addition to lying to commission investigators. According to the DOJ, Tamman also lied during his 2012 trial.

“Despite being a highly educated lawyer, defendant David Tamman has displayed a remarkable disrespect for the law and the legal system over the course of almost a decade,” prosecutors wrote in the 2013 sentencing brief.

In addition to a sentence of 84 months in prison, a judge ordered Tamman to pay a $2,500 fine (Farahi was ordered to pay more than $24 million in restitution to 59 different victims, in addition to his own prison sentence). According to the blog Above the Law, Tamman attempted to appeal the sentence in 2015, with legal representation from famous attorney (and frequent Trump advocate) Alan Dershowitz; the sentence was upheld by the 9th U.S. Circuit Court of Appeals. According to the Trump administration, Tamman completed his seven-year sentence in 2019.