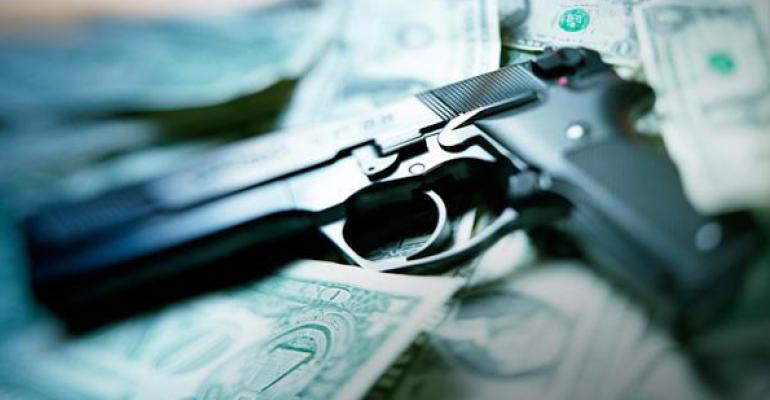 Keith Todd Ashley killed his client and fraud victim, and tried to make it look like a suicide, according to the Justice Department.

A Texas-based financial advisor has been found guilty of a scheme that involved murdering his client, according to the Department of Justice.

After a one-week jury trial, Keith Todd Ashley was found guilty of wire fraud, mail fraud, carrying a firearm in relation to a crime of violence and bank fraud, according to the DOJ. The federal trial followed Ashley's indictment in state court for murder last year.

Ashley was a financial advisor with Parkland Securities for approximately 18 years, according to his BrokerCheck profile, and also worked as a registered nurse, life insurance agent and owner of a brewery (he was fired from the firm in 2020 and is the subject of a pending FINRA investigation).

During the course of the scheme, Ashley had gone “to great lengths to defraud clients that trusted him,” according to U.S. Attorney Brit Featherston, who called him a “depraved criminal.”

According to the original indictment, Ashley had been defrauding clients for years by soliciting them to buy into unit investment trusts with guaranteed returns, but instead would keep portions of the raised funds for his own use, including spending on his fledgling brewery, at casinos, and credit card, mortgage, student loan and college tuition payments, and other expenses. In total, Ashley had raised more than $1.3 million in investor funds as a result of the schemes.

According to the Fort Worth Star-Telegram, one such client was Ashley’s friend James Seegan. Ashley eventually tried to change the beneficiary of Seegan’s life insurance policy to a trust Ashley controlled.

On Feb. 19, 2020, Seegan was found dead in his home with a handgun in his left hand (though Seegan’s wife told police he was right-handed), with a typed suicide note, including that Ashley would “help” Seegan’s wife, according to reporting from the Star-Telegram. Upon investigating, detectives found video footage showing Ashley had visited Seegan’s house that day, leaving after an hour but returning a few minutes later.

Ashley was reportedly the only person to visit until Seegan’s wife found her dead husband later that day. The cops also ran drug screen tests on Seegan, finding he had Etomidate in his system, which is an anesthetic agent used by medical professionals that can quickly knock someone out, according to the Star-Telegram.

Police determined Ashley had killed Seegan and tried to make it look like a suicide, the Star-Telegram reported.

According to the Justice Department, Ashley still tried to collect on the life insurance policy, transferred funds from Seegan’s bank account to himself, and even tried to get a copy of Seegan’s autopsy report.

“By plotting and causing the death of one client to steal his money, Ashley committed the ultimate betrayal of trust and decency and the jury saw Ashley for who he is, a con-artist who would go so far as murder to get what he wanted,” Featherston said.

Ashley faces life in prison as a result of the conviction, according to the DOJ.