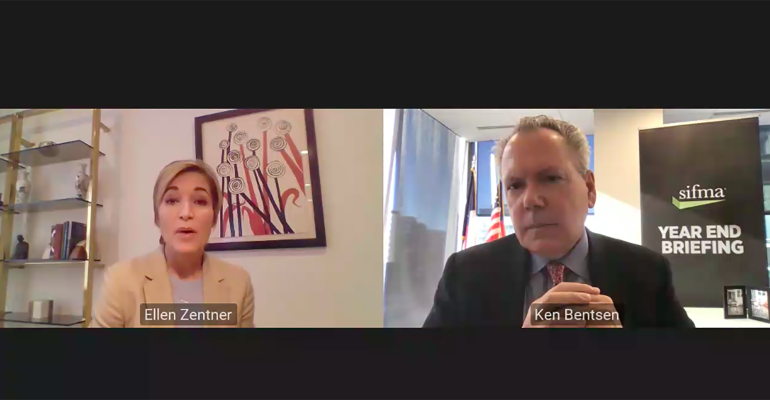 In a virtual 'State of the Industry' briefing, CEO Ken Bentsen said he also hoped the SEC would look at how e-delivery of documents has increased during the COVID-19 pandemic.

As the U.S. concurrently faces increasing COVID-19 cases and positive developments on vaccines, the Securities Industry and Financial Markets Association (SIFMA) plans to focus on the lessons the industry and its regulators must consider post-pandemic in 2021, CEO Ken Bentsen said during the association’s annual “State of the Industry” briefing on Tuesday.

In the coming year, Bentsen said SIFMA would work to get the SEC to reexamine the regulation of e-delivery of documents, arguing the trend had been growing at a “decent” pace pre-pandemic, but climbed even higher during this year. Bentsen also said some portion of the securities industry workforce would likely continue to work remotely even after the COVID-19 vaccine has been widely distributed.

“We’ve been engaged both with our members and then with our regulators to work on how would they adopt a regulatory framework in terms of things like examinations and compliance, overlaying some form of permanent remote working or split shifts,” he said.

According to Bentsen, SIFMA tested its remote work environment in response to COVID-19 on March 13 and never returned to the office. Bentsen said that about 90% of the securities industry was working remotely during the pandemic’s spread in March, with only 30% of the industry now back in the office in some form.

Bentsen mostly adopted a “wait-and-see” approach when asked about his views on the incoming Biden administration, remarking that the early days of Biden’s tenure would likely be dominated by managing the pandemic. Bentsen added that the Department of Labor's fiduciary exemption proposal had reached the White House’s Office of Management and Budget, and he assumed it would be finalized and published once that review is complete.

“In terms of what might come in a Biden administration, it’s hard for me to predict the future there. What I would say is in conversations I’ve had with other regulators ... I think it’s important for policymakers to look at what’s been done under Reg BI and what the outcome of that is,” he said. “Reg BI was finalized last year, came into compliance in June of this year, in the middle of the pandemic, I might note. The industry has spent tremendous resources in terms of labor and capital in preparing for that.”

In addition to the industry briefing, Bentsen spoke with Ellen Zentner, a managing director and chief U.S. economist at Morgan Stanley and chairwoman of SIFMA’s Economic Advisory Roundtable, about the release of the association’s twice-annual Economic Survey, which collected views on the state of the economy from U.S. economists at SIFMA’s global and regional firms. Zentner said their economic outlook considered how bad COVID-19 will get during the winter months, the success of a vaccine rollout, the existence (and size) of fiscal stimulus from Congress, and how quickly household and business behavior would return to some form of normal after the vaccine is widely distributed.

In all, 56% of survey respondents surmised the next round of fiscal stimulus would occur after Joe Biden’s inauguration as president, compared with 38% predicting it by the end of this year. Nearly half of respondents expected the amount of stimulus to fall between $500 billion and $1 trillion (Congress is currently debating COVID-19 stimulus legislation, including a proposed compromise bill totaling more than $900 billion). Economists were split on how quickly the public would return to participating in “high-density” activities after widespread vaccine distribution, with 38% expecting consumer activity to improve, but not to pre-COVID-19 levels, and 38% believing such activity would revert to the pre-pandemic norm.

However, 56% believed employees were never coming back to the office at pre-pandemic levels. But Zenter believed remote working could prove to have its benefits, as more robust work-from-home options could mean populations that have been more adversely affected by the pandemic (and who have lower labor force participation rates in general) would have greater flexibility when reentering the workforce.

“It is going to remain elevated in a post-COVID world. We’ve already seen productivity gains from going virtual, and seen the savings it can deliver. We’ve shown we can do it and do it well, and shown we can do it all the way up to the CEO level,” she said. “We may find some positives here that come out of COVID. But in the middle of it, we’re solely focused on the negatives that might come from COVID.”