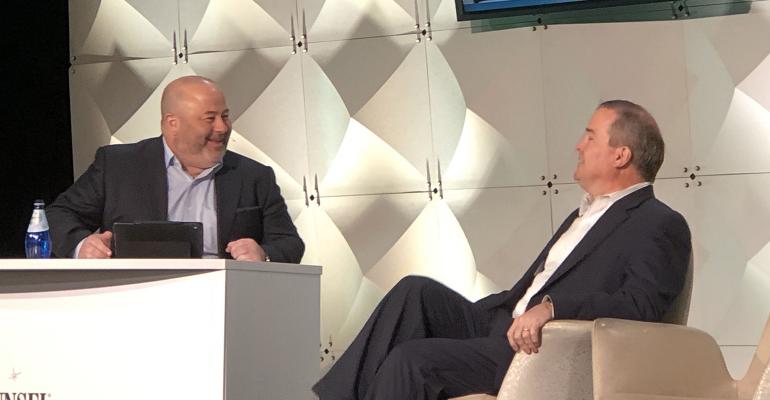 Dale Brown, the head of the industry trade group for independent broker/dealers, admitted the Security and Exchange Commission’s proposed rule governing advisors and brokers was not a “substantial improvement” over current standards—but was the only option that has a chance of passing.

“My view is completely informed by what I hear from my members, and what’s possible in the regulatory process,” said Brown, head of the Financial Services Institute, speaking at the MarketCounsel Summit with MarketCounsel CEO Brian Hamburger. “Is Reg BI a substantial improvement over the suitability standard? No,” Brown said. “But it is what [SEC Commssioner Jay] Clayton thinks he can get his commission to agree to. We don’t live in a perfect world where we can say this is what is best and sprinkle fairy dust around and make it happen.”

The SEC’s “Regulation Best Interest” proposal is meant to ensure advisors and brokers act in the “best interest” of clients, even as it allows for “conflicted” business models (incentives to brokers to sell certain financial products) to exist, as long as those conflicts are disclosed and mitigated. The SEC’s move, mandated by Congress, comes after the Department of Labor’s fiduciary rule for advisors to retirement accounts—which went further in assuring a best interest standard—did not survive a court challenge.

Hamburger pushed Brown on what he sees as the dangers of the proposal, in that it would let brokers adopt the term “best interest” with clients. He said it was difficult for him to see the difference between Reg BI and the existing suitability standard. “So why brand it as ‘best?' I’m not seeing the meaningful difference,” Hamburger said. “What I see is a disservice, telling clients that this is the ‘best interest.’ Do you see that distinction? Why not call it what it is?”

“Is it more confusing? Yes, I suppose,” said Brown. “But the reality in the marketplace is [firms] are no longer solely a broker/dealer. They are hybrid advisory and brokerage firms that from a regulatory point of view must be registered with both FINRA and the SEC, or states, as an investment advisor.” Brown said the proposal would ensure it was economically feasible for financial services firms to service small investors, citing the poor state of financial savings for many Americans nearing retirement—the average American has $120,000 saved as they near retirement, he said. “That’s a problem.”

A trio of fiduciary advocates speaking after Brown said the SEC’s rule did not go far enough to protect investors.

“If the SEC goes forward and adopts Reg BI, it will be a huge step backward for the fiduciary movement,” said Phyllis Borzi, the former assistant secretary for the Department of Labor who was responsible for crafting and pushing forward a fiduciary standard that would have applied to retirement account advisors. That rule, which carried higher hurdles to ensure brokers were acting in the best interests of clients, died after losing a challenge from the U.S. Chamber of Commerce in the Fifth Circuit Court of Appeals.

“People are afraid to ask for advice, because they think they can’t trust the advice they’ll get,” Borzi said, admitting even she could not get her own advisor to commit to the standard in writing.

Knut Rostad, head of the Institute for the Fiduciary Standard, said Reg BI “wipes out the fiduciary standard to investors in almost every case.”

The rule would make it “perfectly OK to have proprietary products with a reasonable basis to believe it’s in the best interests of consumers,” he said. The conflict of interest “mitigation measures” that the rule calls puts the onus on firms to decide what that means, and, he said, could be handled by mere disclosures. “It lets the broker/dealers make it up on their own.”

“There’s a new sheriff in town,” he said, referring to brokerages like Merrill Lynch and Morgan Stanley.