The new rule would require high-risk broker/dealers to set aside financial reserves to deal with future claims, including unpaid arbitration awards.

The Securities and Exchange Commission approved a Financial Industry Regulatory Authority rule late last week that seeks to reign in broker/dealers with histories of misconduct, forced to set aside money in an account that could be tapped only under FINRA approval for regulatory penalties.

Under Rule 4111, FINRA will impose the mandate on broker/dealers that present the greatest risk to investors, based on numeric thresholds across six conditions, including pending and adjudicated disclosure events for registered individuals or firms, as well as terminations and affiliating registered persons from previously expelled firms. FINRA will set the bar by analyzing the number of these conditions at a given firm relative to others in the firm’s peer group.

Firms that are deemed “restricted” will be subject to a “Restricted Deposit Requirement,” meaning they would have to set aside some money in a separate account, like a reserve, available to deal with future claims against the firm, including potentially unpaid arbitration awards.

“This happens often, where a member that is less reputable engages in some kind of bad behavior or has an employee who engages in bad behavior, and then they close up shop the next day, and just avoid all responsibility for their actions,” said Max Schatzow, an attorney at the law firm Stark & Stark. “This is designed to prevent or at least mitigate that.”

According to data released by FINRA, just 1.3% of all member firms met the preliminary criteria for identification as of 2019. When the data is broken out by size, 1.3% of small firms, 2.5% of mid-size firms, and 0% of large firms met the criteria in 2019. 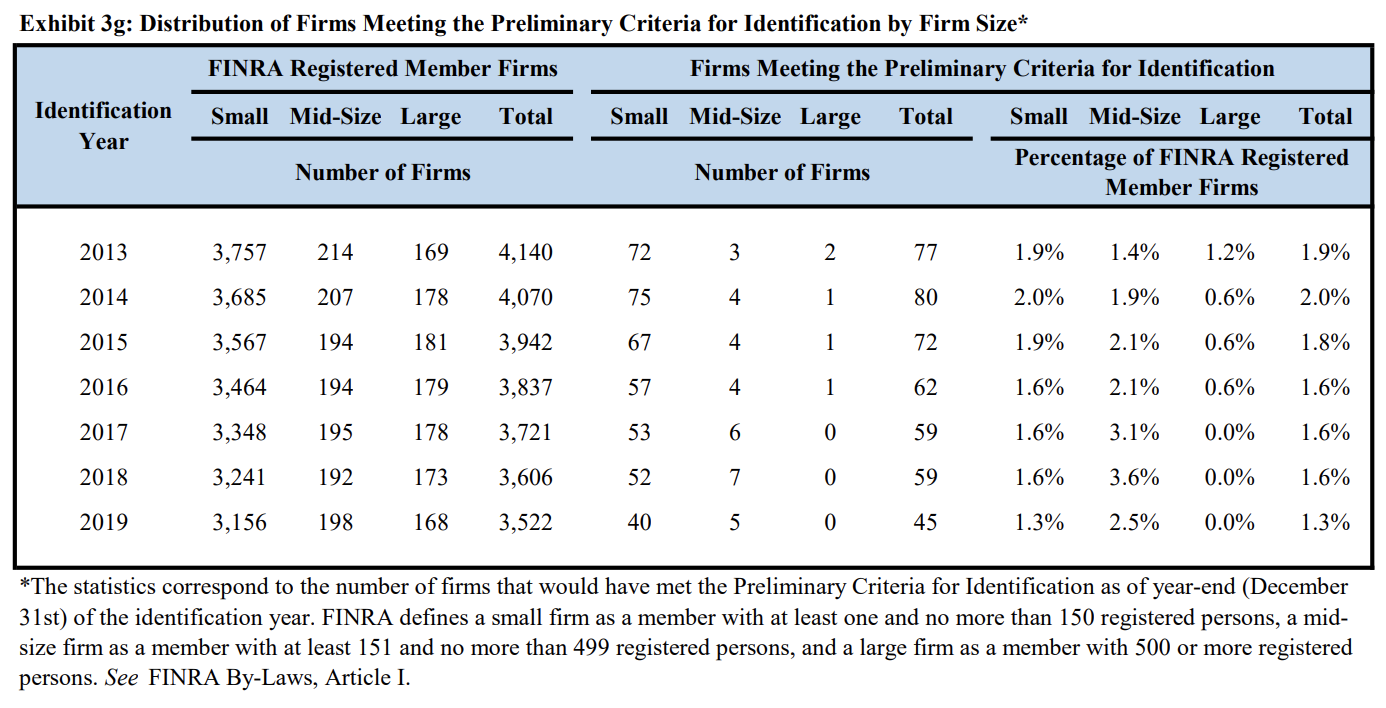 “Large firms don’t take a lot of risks on people with bad histories or people with disclosures,” Schatzow said. “Even more recently, they’re more inclined to fire someone than take a chance on someone with a disclosure history.”

“[FINRA wants] to be able to make sure a firm doesn’t go under and avoid paying an arbitration claim or some kind of disgorgement,” Schatzow added. “A firm like Wells Fargo or UBS—no matter how bad they are, they’re probably going to still stay solvent and be able to pay those claims.”

“It’s a good, minor incremental step that FINRA is taking,” said Andrew Stoltmann, an attorney with the Stoltmann Law Offices and a member of PIABA’s board of directors. “The good news is, that the issue of unpaid arbitration awards is on FINRA’s radar. The bad news is, is that these are kind of baby steps in trying to rectify the problem. Will it help? Yes, but it doesn’t come close to solving the issue.”

Unpaid FINRA arbitration awards has been a top investor protection issue over the past few years. In 2018, 30% of cases with awarded damages had at least some of those damages go unpaid. U.S. Sen. Elizabeth Warren (D-Mass.) introduced a bill in 2018 requiring FINRA to establish a pool funded by fines levied against member firms to pay unpaid arbitration awards. That bill would also have directed FINRA to track whether arbitration awards are paid.

“This isn’t a whodunnit. We know how to solve the unpaid arbitration problem, and that’s to have a restitution fund for the firms that stiff investors in FINRA arbitration,” Stoltmann said. “But FINRA doesn’t want to do that, and they’re especially sensitive to the issue now with a Democratic-controlled Congress and White House.”

The regulator will assess member firms every year to see whether they should be designated or redesignated as a restricted firm. Firms that are designated will have a one-time opportunity to fire high-risk advisors within 30 days of receiving notification in order to fall below the numeric threshold. The firm would not be allowed to rehire that person for at least one year. During the evaluation process, member firms will also have the opportunity to demonstrate why they don’t meet FINRA's hurdle for restriction.

FINRA will determine the restricted deposit requirement based on a firm’s size, operations and financial conditions.

“A member firm may overcome the presumption that it should be designated as a Restricted Firm by clearly demonstrating that the Department’s calculation is inaccurate because, among other things, it considered events that should not have been included,” the rule says. “A member firm also may overcome the presumption that it should be subject to the maximum Restricted Deposit Requirement by clearly demonstrating that such an amount would cause significant undue financial hardship, and that a lesser deposit requirement would satisfy the objectives of Rule 4111 to impose obligations on those firms identified as presenting a higher risk to investors; or that other operational conditions and restrictions on the member and its associated persons would sufficiently protect investors and the public interest.”

In a July 20 letter to the SEC in response to comments, FINRA Associate General Counsel Michael Garawski said the regulator plans to propose amendments to Rule 8312, which governs BrokerCheck disclosures, that would make public member firms’ restricted status on their BrokerCheck profiles. FINRA will also share with state securities regulators whether member firms in their states are designated as restricted.