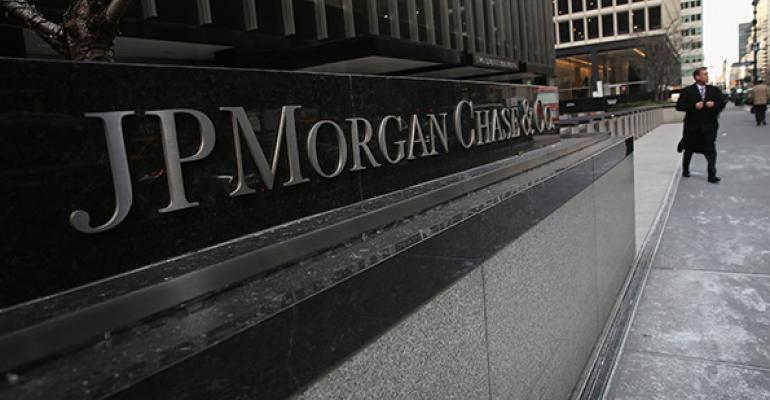 In a letter to the firm that administers the protocol, J.P. Morgan specified that its participation does not extend to its branch-based advisors, some of whom they are charging in court with soliciting former clients.

J.P. Morgan has offered “further clarification” on which of its representatives are, and are not, under the protection of the Protocol for Broker Recruiting, an intra-industry agreement allowing advisors some leeway in taking client data with them when they change firms.

While some firms have left the agreement in recent years, J.P. Morgan remains a participant—at least for some employees.

In a letter sent to Capital Forensics, the law firm that administers the agreement, and obtained by Wealthmanagement.com, Christine M. Conboy, VP and assistant general counsel at J.P. Morgan, sought to make those internal divisions clearer. She wrote that the bank's participation in the agreement applies only to “registered representatives in the J.P. Morgan Advisors line of business” with the title of “wealth partner” or “wealth advisor.”

The letter comes several weeks after the company filed several complaints in federal court against former branch-based advisors allegedly soliciting clients. It's not clear the "clarification" letter is in reaction to those cases. 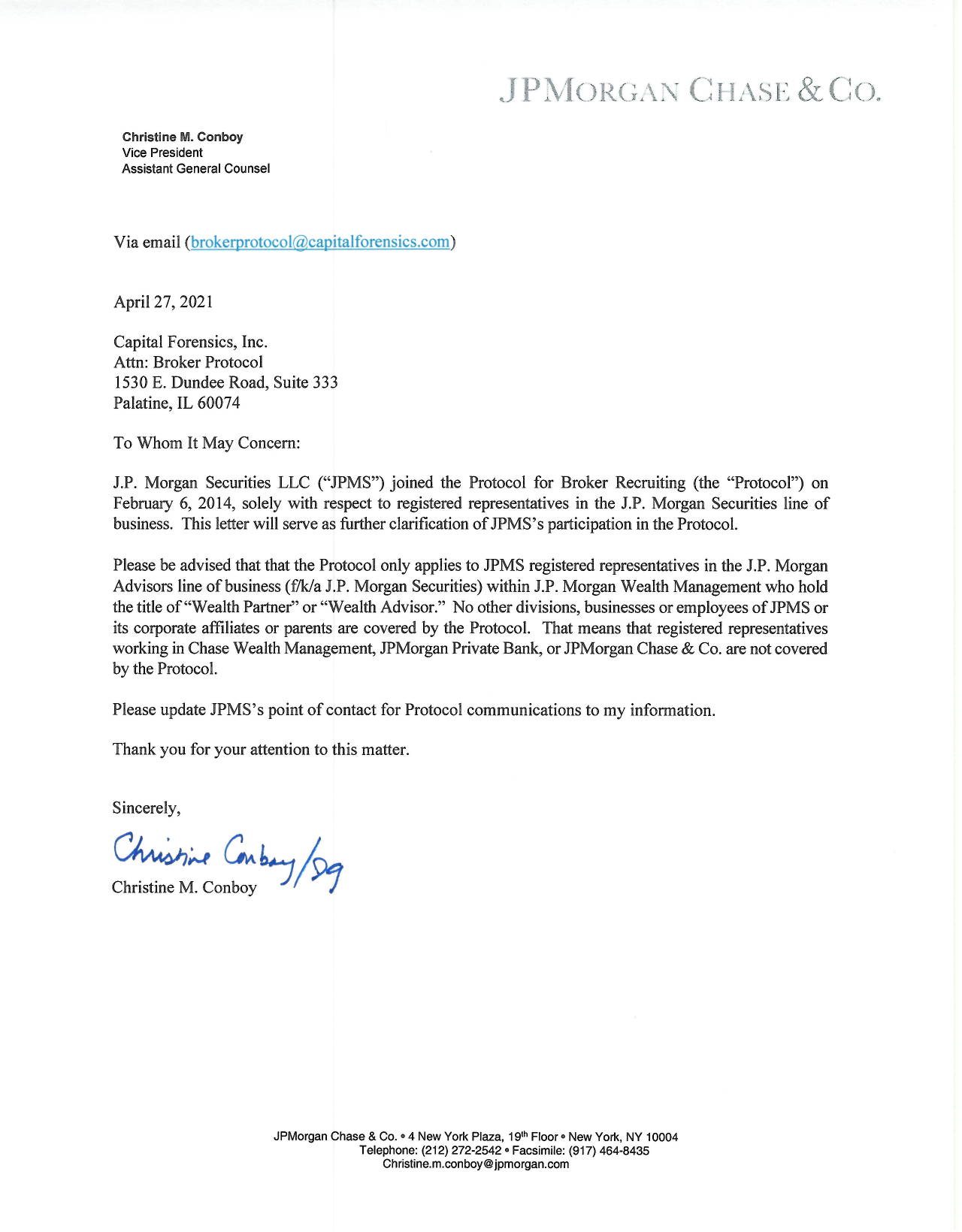 The Protocol for Broker Recruiting was founded in 2004 to help offer advisors greater flexibility (and less legal jeopardy) when moving between wealth management firms and soliciting clients. The three initial firms included Smith Barney (which later became Morgan Stanley Wealth Management), Merrill Lynch and UBS. J.P. Morgan Securities signed on to the protocol on Feb. 6, 2014. But the protocol has faced its share of challenges, including when Smith Barney and UBS, two of the founding members of the agreement, withdrew from the agreement in 2017. Merrill Lynch currently remains a member (though some wonder whether this will be the case for the long term).

To Sharron Ash, the chief litigation counsel for Hamburger Law Firm, the letter reads as a “doubling down” of the bank’s stance that it’s had since joining in 2014. J.P. Morgan is one of about 30 of the approximately 2,100 firms in the protocol with conditions to their agreement to belong in the protocol; in J.P. Morgan’s case, it specifies that certain employees do not fall under the protocol’s protections.

“You have someone who may sit at a Chase branch who is working with clients that come through those doors. In order to render the services, they’re registered representatives at J.P. Morgan Securities,” she said. “By this qualification, J.P. Morgan says they’re not allowed to use the Protocol. It’s an effort to shut the back door.”

Ash suggested the clarification could be due to internal reorganizations at J.P. Morgan; previously, reps with the title of “financial advisor” were the ones who fell under the protocol, but after that title was phased out the firm may have felt the need to clarify who qualifies for the protocol with the newly in-use titles.

The letter from J.P. Morgan comes several weeks after the company filed several complaints in federal court seeking temporary restraining orders (TROs) for former employers who’d departed the company for other firms and were allegedly soliciting prior clients in violation of employment agreements. J.P. Morgan won a TRO against five Illinois-based advisors in federal court earlier this month, and in Florida, J.P. Morgan argued that a former advisor who departed for Wells Fargo was trying to attract clients from his previous employer, despite having allegedly signed a nonsolicitation agreement.

In both of these instances, the advisors in question were operating out of JPMorgan bank branches, which would mean the protections offered by the Broker Protocol would not apply to them, and indeed the complaints against the defendants, nor the counterarguments, did not mention the protocol. Ash doubted the company’s clarification was due to the lawsuits, and noted that it would be difficult for any departing advisor to use the Broker Protocol as a defense in any type of litigation if they hadn’t raised it around the time of their resignation.

But Ash noted the clarification could fortify the bank’s legal position if a departing advisor claims that they should fall under the auspices of the protocol.

“I think they’re looking to make it as clear as possible. Do I think it was done for the litigations? No, but I do think it was done so they have an argument in litigation that nobody could say ‘I was confused whether I was a financial advisor or not a financial advisor,’” she said. “If you don’t fit those criteria, you have to be on notice that you’re not making a good faith mistake."