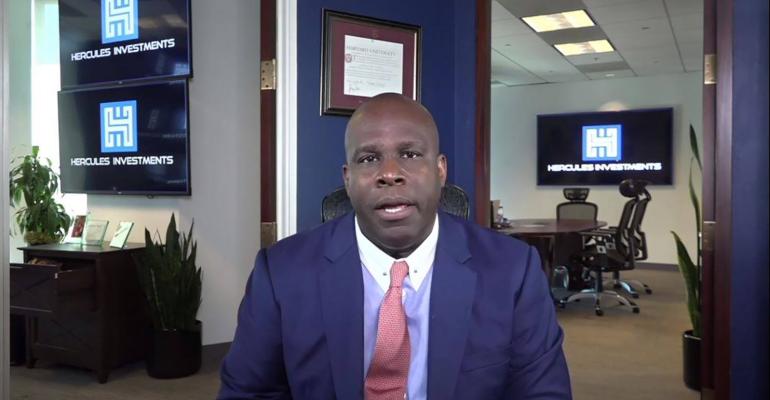 James Arthur McDonald Jr. appears to be on the lam as he faces as much as 20 years in prison for allegedly defrauding investors, according to the Justice Department. The SEC also filed a complaint against the California-based advisor and frequent CNBC commentator.

A California advisor and frequent CNBC commentator is on the run after being charged with defrauding clients of millions, according to the Department of Justice and the Securities and Exchange Commission.

James Arthur McDonald Jr. faces as much as 20 years in federal prison, according to the Justice Department, which filed the charges in California federal court this week. The SEC also filed a complaint against the registered investment advisor.

McDonald was the CEO and chief investment officer for two registered companies; Hercules Investments, based in Los Angeles, and Index Strategy Advisors, which was based in Redondo Beach. He was named a "rising star" advisor in 2012 by ETF.com, frequently appeared on CNBC as a market analyst, including on “Fast Money” and “The Exchange,” and Hercules Investments won a WealthManagement.com Industry award in 2020 in the category of Alternative Asset Management.

“As soon as we found out he was under investigation, we no longer allowed him on our air,” said a CNBC spokesperson.

According to the DOJ, McDonald’s troubles began after taking risky short positions in 2020, betting that the U.S. economy, and the stock market, would crater due to the COVID-19 pandemic and the 2020 presidential election. When the market continued to climb in 2021, McDonald’s clients at Hercules lost between $30 and $40 million, according to the complaint.

Clients began asking Hercules employees about losses in their accounts, and since McDonald’s compensation primarily was based on a percentage of his clients’ assets (typically around 2% of AUM at Hercules), the losses meant steep declines in McDonald’s own earnings, according to the DOJ.

In response, McDonald began soliciting funds for a purported capital raise for the company; as an “avid football enthusiast,” he claimed to be setting up a publicly traded mutual fund with the ticker symbol of “NFLHX,” but according to the Justice Department, this was a ruse concocted as the advisor continued to not inform clients about the seismic losses the firm suffered.

Any litigation that stemmed from those losses would need to be disclosed if he went forward with the fund, according to the DOJ.

McDonald then used some of the funds from this capital raise for his own purposes, including $174,610 at a Porsche dealership, $109,512 for rent expenses and nearly $7,000 on designer menswear, according to the DOJ.

Through his other company, Index Strategy Advisors, McDonald used less than half of $3.6 million raised over more than two years in that firm’s investment fund for trading. Instead, McDonald spent more than $1 million of the money on his own expenses, and used more than $2 million on Ponzi-like payments to Hercules clients and business expenses for the firm, according to the SEC complaint against him.

“My investigation has revealed that McDonald’s fraudulent capital raise is part of a broader pattern of deceptive conduct, which includes the creation of false account statements for ISA clients, his ongoing misrepresentation to clients that ISA was a registered investment adviser even after he had terminated its registration, and even misleading statements about his educational background,” according to FBI Special Agent Robert Chowthi, according to the criminal complaint.

But some clients discovered Hercules’ plight, and confronted McDonald on a phone call in March 2021, while McDonald continued to send ISA clients false account statements, according to Chowthi’s complaint.

On Oct. 1, 2021, attorneys from the SEC contacted McDonald’s attorneys and scheduled an Oct. 14 interview, but McDonald responded that he was getting new counsel and could not make the appointment; the SEC eventually subpoenaed him for records and to appear on Nov. 16. Though McDonald did respond to some records requests, he failed to show on the scheduled date.

“According to McDonald’s former romantic partner and business associate, D.J., after the SEC subpoenaed records from Hercules and subpoenaed McDonald for testimony, McDonald told D.J. that he was not going to stick around and that he would ‘vanish,’” Chowthi wrote.

Chowthi said McDonald gave D.J. (who’s only identified as such in the complaint) a laptop and cell phone to secretly communicate with McDonald, as well as a thumb drive containing information about which clients were owed money.

On one morning in late October or early November 2021, D.J. woke up and found that McDonald was gone, leaving his car (with the keys inside) in D.J.’s driveway. According to Chowthi, D.J. last spoke to McDonald on Nov. 18, when he admitted to taking clients’ money without investing it; McDonald’s accounts for his phone and email address have since been terminated.

To Chowthi, the evidence indicates that McDonald is currently “intentionally concealing his whereabouts.”