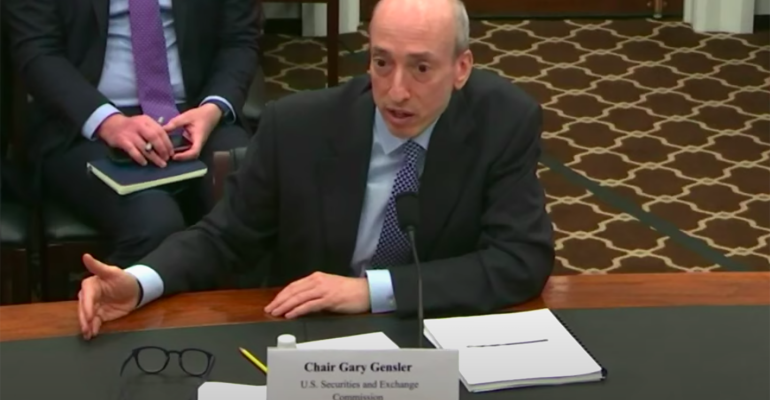 The SEC chair told the House Appropriations Committee he would use the additional funds to keep pace with growing number of RIAs, scrutinize broker/dealers' Reg BI compliance, and get back to in-person examinations.

Securities and Exchange Commission Chair Gary Gensler called for Congress to support President Joe Biden’s budget request for the agency that would include a 5% boost in the number of staff examining investment advisors.

During testimony before the Subcommittee on Financial Services and General Government in the Appropriations Committee in the U.S. House of Representatives on Wednesday, Gensler asserted that the commission’s Examinations Division needed more hands on deck to keep pace with industry expansion.

“Given the evolving markets, heightened geopolitical environment, and increased attention paid to cyber risks, I expect the demands on examinations to continue to grow,” Gensler said in his prepared testimony. “Since 2016, the number of registered investment advisors has increased 25%, to 15,000. This growth directly affects our work.”

Gensler also said the division needed to “increase its capacity” in order to examine broker/dealers, especially in terms of how they will need to comply with the SEC’s Regulation Best Interest rule.

The SEC chair testified before the subcommittee in connection with Biden’s 2023 budget request for SEC operations, which proposed an 8% boost from 2022 to $2.15 billion. According to Gensler, the increase would help the commission keep up current services and increase the number of full-time equivalent employees, with approximately 6% more full-time staff than its previous high mark in 2016. Gensler noted that despite the growth in the SEC’s responsibilities, the agency head count had shrunk in that time.

“When I testified last year, the agency had 4% fewer staff than it did in 2016; it remains modestly below where it was in 2016,” he said. “We can’t shrink when we’re trying to maintain a gold standard. The best athletes in the world still practice—generally, even more than their competitors.”

Gensler also detailed the Division of Investment Management’s growth of 9% since 2016, though he attributed that to a new Analytics Office, saying that without it, the unit would have shrunk in that time. Gensler said Biden’s budget proposal would boost staff levels of 10% from 2021. The division has needed to keep pace with a dramatic climb in the number of RIAs (from 12,000 to 15,000 since 2016), the number of ETFs by 25%, and a 70% growth of RIA clients in that time, which he attributed to the booming popularity of robo advisors.

Much of Gensler’s testimony focused on the divisions for Enforcement and Examinations, with the former shrinking 5% between 2016 and last year. The 2023 budget request would bring the division to about 1% below where it was at the 2016 peak. According to Gensler, the Enforcement Division houses about a quarter of the SEC staff and has about 1,700 open matters at any given time.

Gensler said the additional staff would enable the division to investigate more misconduct and speed enforcement actions, as well as boosting the agency’s litigation support and its Crypto Assets and Cyber Unit (the SEC recently announced it would hire 20 more staff members to the unit).

The Examinations Division includes another quarter of the commission’s total staff and has grown about 4% since 2016, with the budget request potentially adding an additional 4% boost from 2021, according to Gensler. The chair said the division had examined about 15% of SEC-registered advisors in 2020 and 2021, and conducted approximately 3,000 exams a year, though Gensler said they’d kept this pace largely due to the ease of remote exams during the pandemic.

“There’s no replacement for on-site exams, though,” he said. “As registrants are coming back, we will need to factor in additional resources for our Examinations Division to conduct on-site exams.”

Gensler also detailed the Division of Investment Management’s growth of 9% since 2016, though he attributed that to a new Analytics Office in the division, saying that without it, the division would have shrunk in that time. Gensler said Biden’s budget proposal would boost staff levels of 10% from 2021. The division’s had to keep pace with a dramatic climb in the number of RIAs (from 12,000 to 15,000 since 2016), the number of ETFs by 25%, and a 70% growth of RIA clients in that time, which he attributed to the booming popularity of robo advisors.