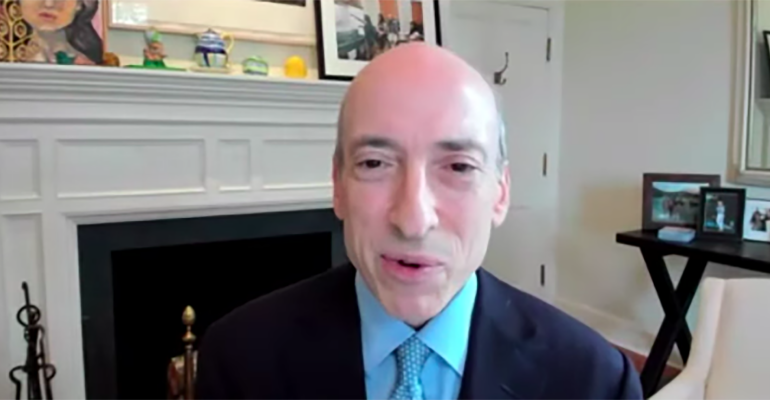 Securities and Exchange Commission Chair Gary Gensler said the commission would move forward with a public comment period for proposed rules on corporate climate risk disclosures in “the next handful of months” during testimony before the U.S. House Committee on Financial Services on Tuesday.

Gensler told Rep. Nydia Velázquez (D-N.Y.) that the commission still had to complete its economic impact analysis on the plan for mandating disclosures, and take comments from commissioners, but he expected the process would be completed by the end of this year or early next year.

Gensler’s House testimony touched on a wide array of subjects; he argued the country’s markets would be in “uncharted waters” should the U.S. default on its debt (congressional Republicans currently oppose raising the debt limit, with Treasury Secretary Janet Yellen saying the country has until Oct. 18 to increase the limit).

He also reiterated his concerns that payment-for-order-flow left investors in danger of paltry best execution, and argued that it was imperative to get exchanges and lending platforms dealing in cryptocurrency under the “public policy framework,” arguing investors could be hurt otherwise.

In his prepared testimony, Gensler said the SEC was working with the Commodity Futures Trading Commission on the regulation of crypto markets, as both agencies had “relevant, and in some cases, overlapping jurisdiction” on how to approach oversight. Under questioning from Rep. Patrick McHenry (R.-N.C.), Gensler said he believed SEC authority in regulating these spaces was “clear,” but said there were ways the commission could work with Congress to close any gaps on oversight (earlier that day, McHenry introduced legislation to create a “safe harbor” for start-up digital asset projects, which he said was based on work by SEC Commissioner Hester Peirce).

Gensler also reiterated the call for more agency resources, especially considering the growth in capital markets. According to Gensler, the SEC’s full staff had decreased about 4% from a 2016 total of 4,650, with a 6% reduction in the Enforcement Division staff, a 20% drop in staff at the Division of Corporation Finance, and no increase in examination staff despite a 20% boost in the number of RIAs, and 65% increase in the assets those RIAs managed.

“Other divisions are similarly stretched thin,” he said. “Though I’m appreciative of the House’s decision to support a fiscal year 2022 budget of about $2 billion, this would get us back only to a headcount of 4,859.”

Rep. Ann Wagner (R.-Mo.), recalled Gensler stated in earlier testimony that he’d work with commission staff to ensure that the SEC’s Regulation Best Interest ‘lives up to its best interest label.’ Wagner questioned whether this was still the case, claiming that Gensler had brought on staff with a public record of opposing the rule.

Gensler said that was as “true today” as it was when he originally said it, reiterating the point in later questioning from Rep. Carolyn Maloney (D.-N.Y.). Gensler said staff would be working to ensure that brokers and investment managers “understood their duties” to comply with the rule.

“But if the rule doesn’t work ultimately, we’re going to look to make sure that brokers ensure the investing public truly gets best interest,” he said.

Gensler’s testimony before House members came one day after directing commission staff to study the potential risks of complex exchange traded products and to offer ideas on rules to counter those risks, a move supported by fellow commissioners Allison Herren Lee and Caroline Crenshaw.