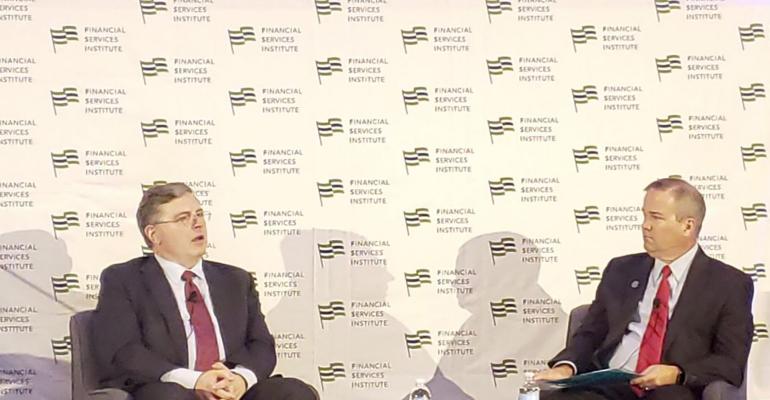 FINRA May Alter Its Rulebook in Light of Reg BI

The agency will revisit its 'rules that were adopted in the absence of a best interest standard,' said FINRA head Robert Cook.

The Financial Industry Regulatory Authority will take a phased approach to implementing the Securities and Exchange Commission’s Regulation Best Interest, according to FINRA President and CEO Robert Cook. As the regulator prepares for the rule package to take effect in June 2020, its efforts could include changing or even deleting some of its own rules related to issues addressed in Reg BI.

“First phase would be, are there aspects of our rules that need to be clarified/changed now in order to get rid of any perceived or actual obstacles of implementation of Reg BI?” Cook said, speaking at the Financial Services Institute’s Forum & Capitol Hill Day on Tuesday.

The FINRA rulebook has been prescriptive about certain issues, Cook said, because there wasn’t an overarching best interest duty. Now that there is, there may be rules that need to be deleted, changed or enhanced.

If the agency were to make any changes to its rules, it would have to go through the public comment process.

Cook expects the first phase to be done well before the June 2020 implementation date. The second phase may not be done by then and may, in fact, not be done all at once.

Several states as well as the XY Planning Network filed lawsuits against the SEC this week, challenging Reg BI.

The FINRA head also addressed one of FSI’s advocacy priorities for 2019, “combating regulation via guidance or enforcement.” The organization recently launched a call to action, urging its members to ask their congressional leaders to tell the SEC to stop regulating by enforcement. The group takes particular issue with the SEC’s Share Class Selection Disclosure Initiative, which encouraged 79 corporate RIAs to self-report undisclosed conflicts when choosing the share class of mutual funds being sold to investors. Enforcement staff could not cite a specific rule that had been violated, FSI claims.

While Cook could not speak for the SEC, he said enforcement was one tool in the toolkit. FINRA has an escalation process, where a senior committee of leaders, including folks outside of enforcement, can offer their perspectives on whether the agency is choosing the right regulatory response.

“Most regulators would say enforcement is a key part of the overall regulatory toolkit, and it’s important to be able to hold firms accountable, and where appropriate, get restitution to customers,” he said. “I also think you’ll find most regulators aren’t going to quibble with the idea that you can’t make up rules through enforcement.”

But Cook also stressed the positive side of the situation.

“We live in a world where we don’t have rules that address every single aspect of your business, and this is a good thing,” he added. “You don’t want to live in a world where regulators try to contemplate every potential scenario and write a rule about it because we’ll get it wrong and constrain innovation, and all kinds of things like that.”