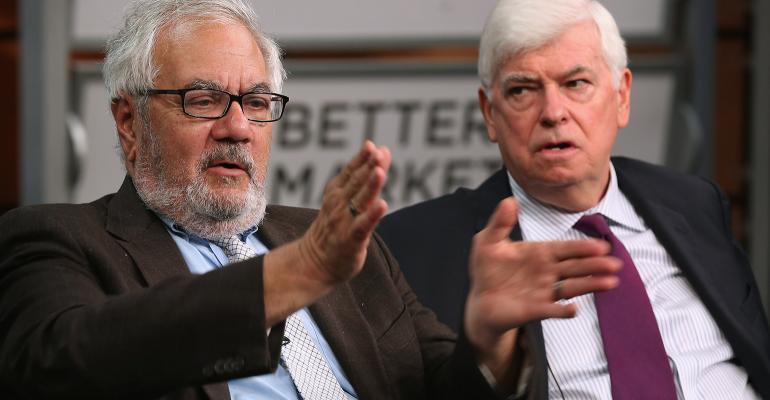 Dodd, Frank Take a Stand Against the SEC's Reg BI

Reg BI, at odds with Section 913 of the Dodd-Frank Act, cannot stand, the congressmen argue.

In 2010, the Dodd-Frank Act gave the Securities and Exchange Commission the authority to create a uniform fiduciary standard of conduct for broker/dealers and investment advisors, but the SEC’s Regulation Best Interest, which establishes a standard of conduct, is not a fiduciary standard. And now the creators behind Dodd-Frank are taking action. Former Sen. Christopher J. Dodd (D-Conn.) and former Rep. Barney Frank (D-Mass.), along with 10 current and former congressmen, filed an amicus brief in the case challenging Reg BI.

In September, seven states and the District of Columbia filed suit against the SEC challenging Reg BI, arguing that the rule package fails to protect investors and puts brokers ahead of their clients. The XY Planning Network, the membership organization that provides business support services to over 1,000 registered investment advisors, and Ford Financial Solutions followed suit, filing a similar case against the SEC. Those cases have since been consolidated into one in the 2nd U.S. Circuit Court of Appeals.

An amicus brief is filed by someone who is not a party to a case but offers information that bears on the lawsuit. In it, the congressmen argue that the SEC’s rule cannot stand because it ignores Congress’ plan and fails to harmonize the standards of conduct that Section 913 of Dodd-Frank requires. Section 913 required Congress to establish a standard of conduct for brokers that is “no less stringent than the standard applicable to investment advisers.”

The act said the SEC should impose a uniform fiduciary standard on b/ds and investment advisors, under which investment decisions would have to be made “without regard” to the broker’s interests.

They argue that the SEC misinterprets Section 913; specifically the agency does not take into account Section 913(g), which “dictates that the SEC’s rule implement a uniform fiduciary standard of care.”

They also argue that Reg BI does not raise the standard of care for broker/dealers and registered reps, which was the act’s intention.

Others, including the Consumer Federation of America, the Financial Planning Association, the Public Investors Arbitration Bar Association and Better Markets, also filed amicus briefs in the case this week.