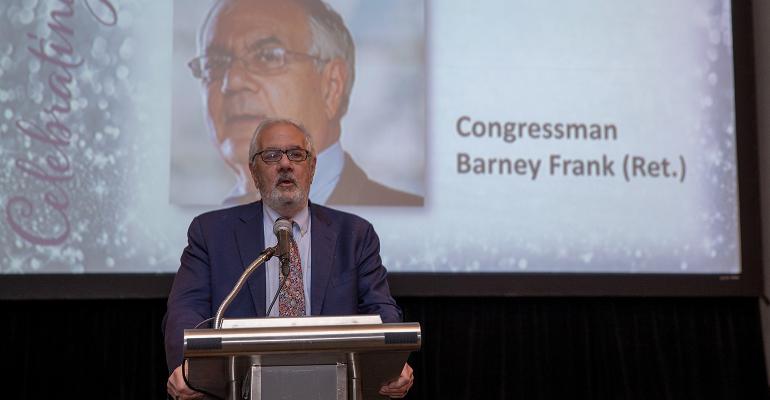 The former congressman on why he backs an ESG index based on LGBTQ values and preferences.

It’s a testament to how far gay and lesbian equality has come that former U. S. Rep. Barney Frank, who led the charge in those fights for over three decades, is now rallying support for an investable index of companies that mirror the values of the LGBTQ community. Loyalty Holdings’ LGBTQ100 index screens companies based on a record of equal rights and financial fundamentals, combined with a survey measuring the LGBTQ population’s affinity with corporate brands, products and services. Frank spoke to Wealthmanagement.com about investing without compromising your principles.

Wealthmanagement.com: What persuaded you that this index was a good idea?

Barney Frank: I’ve been working on anti-discrimination measures based on sexual orientation since I was first elected to a legislature in 1972. For much of that period we’d been on the defensive, trying to eliminate disadvantages, get the right to marry, right to serve in the military, the right to work without being discriminated against. We’ve made great progress.

By the early part of this century we had much, not all, but much of what we needed to defend our rights. And that meant it was now time to work for more positive things. It’s time to think about opportunities, one of which is the ability to invest money without having to compromise your principles.

WM: What is the approach?

Frank: There are two aspects. One, that the company’s own practices be supportive. We would not have Chick-fil-A on there when the owner is giving money to defeat same-sex marriage. You want people whose hiring practices and appointments are consistent with recognition of our rights.

You also want to make sure you have companies with products and services that gay and lesbian people like. There are cultural patterns in every subcommunity, brands and services that people are more comfortable with, so you want to get those in there. We did some very specific polling to figure out which companies people are favorably oriented to.

And, of course, pick companies that do well on the fundamentals. This is not a charity.

WM: Can you make the case this approach will do well in terms of returns?

Frank: There is a broad enough range of investable companies out there so that you can put together a fund that meets your ideological and ethical concerns without any loss of income.

WM: We’ve seen a lot of ETFs dedicated to gender parity, boardroom diversity, women’s rights, etc. … The cynics say they tell good stories, but ETFs trying to capitalize on social trends is a gimmick and managers should focus only on maximizing returns.

Frank: I’m sorry. Is capitalizing on the trend supposed to be bad? Capitalizing is another word for promoting them. And benefiting from them. Did gay men benefit from the social trend against discrimination? I think it’s a good thing that you capitalize on that and promote it. This is not a passive thing. It’s good for the companies to be involved and incentivizes them to make sure they have good records.

If you don’t believe in these impact investment funds, don’t invest in one. This is a wholly voluntary operation. I won’t tell them what to do with their money, and they can’t tell me what to do with mine. That is just a silly complaint. Nobody has a claim on my money. Nobody can insist that I have to invest with them. And I think it is perfectly reasonable to be able to put your money where your mouth is.

WM: Advocates of values-based investing say tilting a fund toward a good company, or away from a bad one, is fine but it doesn’t move the needle in terms of impact. The needle gets moved in proxy battles and pressure in the boardroom.

Frank: I agree it’s not a major impact. It might incentivize a company, but the goal of this is not primarily to move any needles. It’s so you can invest your money in a way that you feel comfortable with without sacrificing performance. To the extent that this gives some companies an incentive to be better in their practices, OK, but I don’t think that it’s the major reason. There is a wide enough range of companies around that you don’t have to have any financial sacrifice.

If you’re talking about companies that have bad practices, we’re not investing. But not having them in your index fund is not a real factor on behavior. Maybe have active boycotts. But in terms of trying to change their behavior, that goes beyond inclusion or exclusion from an index fund.

Barney Frank is one of the keynote speakers at the upcoming Inside ETFs conference, to be held Jan. 26-29 in Hollywood Beach, Fla. Register here.