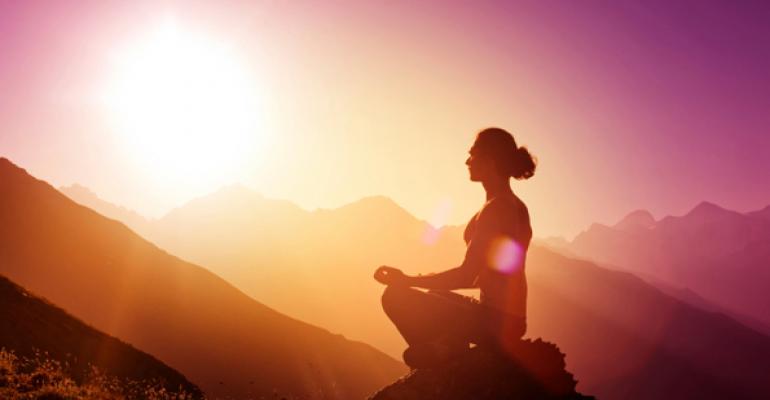 Feeling under the gun? Here’s how one advisor network helped its members to learn how to breathe again.

Chip Roe was among about two dozen advisors who had agreed to trade their busy schedules for a four-day session of yoga and meditation in the Catskill Mountains of New York a year ago. Roe and a few others had greeted the long weekend with some skepticism. Advisors had been told to drive their cars with the stereo/radio shut off for a full week before the retreat. When they arrived, they were told there would be no cellphones, no e-mail—and no agenda. And then came the moment during the middle of the retreat when advisors were told they would remain silent for a full 24 hours—even eye contact with each other was discouraged. For professionals whose business was structured around talking with clients, staff and prospects, it was … unusual.

“This is not anything I would have normally gravitated towards—meditation and mindfulness. I fought it pretty hard for the first two days,” says Roe. He and another advisor had a running joke at the retreat’s beginning—“I’m ready when you are,” a reference to the car waiting in the parking lot that could provide a swift retreat of a different sort.

But coming to the Catskills was not a casual undertaking for Roe, 49, principal and vice president at Potter Financial Group in Durham, N.C., a registered investment advisor with $120 million in assets. He was ready to make changes in his life. It wasn’t just that he was closing in on a major age milestone; there also was that recurring back pain that required Tylenol patches. Roe had issues with high blood pressure and cholesterol, and he was about 30 pounds overweight. His mother, who suffered from Alzheimer’s disease, required more of his attention. His workweek ran up to 60 hours, but he found himself on what he described as “autopilot”—moving from task to task without being fully present for any of them, a problem at home as well. “I could see there were many times I wasn’t completely there, especially for the people that mattered the most,” he says.

Roe isn’t alone. As the pace of change in the financial advisory industry picks up—in areas of regulation, technology, and competition—many advisors find themselves multi-tasking in ways that aren’t necessarily paying dividends. “They find they’re on a phone call while trying to read an e-mail while trying to read the newspaper,” says Stuart Silverman, chief executive of Fusion Advisor Network in Elmsford, N.Y., a provider of broad consulting services to its 240 independent advisors. After the 2008 crash, “People couldn’t sleep, they were worried. You spend all day reassuring people and worrying about your clients. Sometimes you need to say, ‘Well, how do I balance my own life? I still have to go home and be a father or a mother. I have to be involved in my community and my philanthropy.’”

It was Fusion that decided to launch a work/life balance program a year and a half ago called Thrive. The retreat in the Catskills was one of the programs it sponsored; it subsidized the cost of the event, charging its member advisors $1,200 each to attend. (Silverman said the full cost, counting the program services, would have run $3,000 to $4,000.) Silverman, who describes his own personality as “Type A Plus, even without coffee,” said nearly seven out of 10 Fusion advisors told the firm in a survey that they wanted to manage stress better and improve the competing worlds of home and office.

“Independence is incredibly lonely,” Silverman says. “These are all small business people, entrepreneurs running businesses, but they don’t have a lot of time to, A, slow down, and B, balance, and C, bounce ideas around…Sometimes their best brainstorming comes when they step away from the business.”

On-the-job pressures are nothing new to the American workforce. In 2010 the National Institute for Occupational Safety and Health cited data that said the average work year for a working couple had risen by almost 700 hours in the last two decades, while 25 to 30 percent of the workforce experience high levels of emotional exhaustion at the end of the work day.

Financial advisors are no exception. Alden Cass, the psychologist who co-authored the book Bullish Thinking, wrote that 23 percent of Wall Street brokers he surveyed for a research report suffered from clinical depression, while 38 percent had mild to moderate symptoms. Financial advisory was the third best job in America in an annual ranking last fall by Money magazine, but in the area of stress it graded the career a “C”—sub-par—the same grade that the career received for stress in a similar ranking by the magazine five years earlier.

The popularity of financial advisory appears to belie the pressures advisors say they experience. Advisor career consultant Mindy Diamond says stress on advisors has grown in recent years, including having to defend the actions of broker/dealers and large banks whose misadventures have landed them in the headlines. But the pressure is nothing they can’t handle.

“By and large, I don’t particularly think it’s an overly stressful career,” she says.

“An advisor, no matter where he works, is very much in control of how many hours he works. I think it’s a relationship-driven business. So each individual advisor decides how much time he needs to put into managing his business. Technology has made it easier for people to communicate. There are a lot of tools and resources for advisors to make them better at what they do.”

Still, the field of work/life balance doesn’t appear to be one that has been embraced by the financial advisory industry. Programs such as Fusion’s Thrive are an exception and not the rule. Janus has run programs for advisors for six years on such topics as improving energy, reducing stress, and strengthening cognitive ability under the auspices of its Janus Labs unit. (Periodic conference calls on such subjects in the program have attracted up to 250 advisors, Janus says.) But most brokerages aren’t on board with such programs, Cass says.

“They have coaching in a lot of these places, but they’re internal; they’re business coaches. They don’t have psychology degrees,” he says. “That’s what I come across a lot—‘We’re going to help you build your business,’ but they’re not dealing with what’s under the hood, which is the emotional, motivational component, which needs to be constantly tended to.”

Janice Marturano, founder and executive director of the Institute for Mindful Leadership, which managed Fusion’s Catskills retreat last year, said Fusion was the only financial advisory firm for which she had done such a program (although executives from the broader financial industry participate in institute programs on an individual basis).

Regardless what business your industry is in, Marturano says, people need ways to focus. “We’re still all faced with information overload from the Internet with 24/7 connectivity from our Blackberrys and our iPhones, and all of those things are making us feel overwhelmed,” she says. “This kind of training opens up some spaciousness for us…We need to see clearly what’s actually here. It’s a new environment, it’s a new speed, it’s a new marketplace. We need to see what it is.”

Roe, for one, considers his time at the retreat well-spent. It helped put him on a yoga regimen that he credited with helping him lose 30 pounds in the past year, eliminate his back pain, and come off other medications. He’s also scaled back the work hours and is spending more time at home with his two teenage daughters. When he’s with them, he says, his mind is there as well, a quality he attributes to the mindfulness exercises in which he’s engaged.

“You’re learning a new habit. I don’t think it comes naturally to most people,” Roe says. “In this business, you tend to have the, ‘If you’re not pedaling hard, you’re losing ground’ kind of attitude … It can be easy to put yourself last and just continue to really work as hard as you can.”