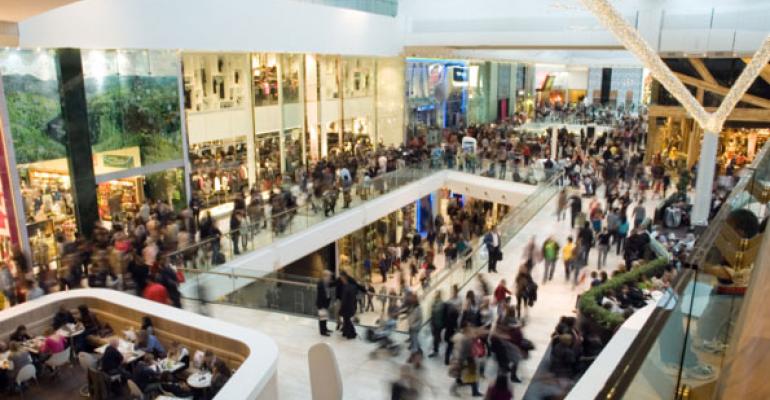 The Internet Did Not Kill the Mall

It was a prediction that was not only wrong, but now it seems downright laughable: Regional malls aren’t dead – the Internet didn’t kill them. In fact, quite the contrary; most of them are actually thriving. And, industry experts say the regional mall REIT sector has several years of strong operating performance ahead of it.

“The regional mall REIT sector is one of our favorites, if not our favorite,” says Rich Moore, managing director of REIT research for RBC Capital Markets. “It’s done very well this year and is supported by a very solid fundamental business, and that’s not going to change anytime soon.”

Indeed, the regional mall REIT sector currently is the best performing sector in the entire REIT universe. Year-to-date, it has provided the highest total returns of all REITs sectors at 23.03 percent and has outperformed the equity REIT index and the S&P, which posted total returns of 15.41 percent and 7.9 percent, respectively, according to SNL Financial. Interestingly, the sector has a long track record of outperforming the REIT sector at large.

The regional mall REIT sector consists of 10 REITs with a market capitalization of $854 billion, according to SNL Financial. The sector is the largest of all REIT sectors and includes the largest U.S.-based REIT, Simon Property Group (NYSE:SPG), which has a market cap of roughly $50 billion. The Indianapolis-based REIT also happens to be the only regional mall REIT included in the S&P 500.

Analysts say regional mall REITs are a perfect example of getting what you pay for. They’re not the cheapest REIT stocks, and Moore contends that the real investment story should emphasize fundamentals rather than current stock valuations. Most REITs have seen significant increases in their share prices (as evidenced by the fact that the sector’s total return is the highest of all sectors, but its dividend yield of 2.7 percent is the lowest).

That’s not to say that regional mall REIT stocks are overvalued. “I think there’s still room to run for investors,” says James Sullivan, a REIT analyst with Cowen & Co., pointing to increased occupancy rates, rising rental rates and improving leasing spreads. “We’re always looking for forward trends, and regional mall REITs appear to be in the early to middle stages of property recovery.”

While it’s understandable to link consumer confidence and retail sales to regional mall REIT performance, the true source of demand comes from retailers. Since the recession, retailers have honed their business models to operate more leanly and to allow them to be profitable in difficult economic conditions.

“There's been a lot of focus lately on cost of occupancies and sales trends with tenants, and while sales have been extremely good with tenants… to me the more important story has been what I have been saying for the past six quarters, which is that the retailers have very strong operating margins,” said Arthur Coppola, chairman & CEO of The Macerich Co. (NYSE: MAC), a Santa Monica, Calif.-based REIT that owns 63 regional malls.

Coppola made the observation during the REIT’s first quarter 2012 earnings call. He continued: “When you multiply strong operating margins by strong sales levels and positive comp sales results, you find yourself a retailer who has cash on their balance sheet – they're making money, and they're looking to expand their footprint. . . .That makes for a very strong leasing environment. We think that's an environment that we're going to be able to tap into for years to come.”

Moore agrees, adding that there’s “enormous interest” from retailers in opening new stores. RBC Capital Markets’ National Retailer Demand Report found that store opening plans for the next 24 months increased to over 74,000 – a new high for the 2,000-plus retailers the firm tracks.

Demand has even trickled into smaller markets, according to Stephen Lebovitz, president and CEO of CBL & Associates Properties (NYSE: CBL). The Chattanooga, Tenn.-based regional mall REIT focuses on owning dominant centers in middle markets. It currently boasts a portfolio of 160 properties including 90 regional malls/open-air centers.

“A number of retailers have recently announced significant expansion plans for the coming years,” Lebovitz said during the REIT’s first quarter earnings call. “I think initially they were focused on the real high productivity malls, but now we’re seeing retailers coming to us and talking about expanding into our markets that weren’t having those conversations a year ago.”

Coppola says the retail environment is very healthy. “Retailers gave up chasing sales and started chasing operating margins,” he says. “When you go back and you make a secular change to your business model and you figure out how to make money again, you're going to have resurgence.”

Most notable: the leasing spreads that REITs are achieving and the resulting change in net operating income (NOI).

Sullivan points to the 10-year period starting in 2001 – he calculates that the average leasing spread across the sector was 14 percent. Leasing spreads weakened in 2009 and 2010, but began to improve last year. “Today those leasing spreads are going up for everybody, from Simon and Taubman to middle-market mall owners like CBL,” he says.

For example, Simon’s releasing spread for the first quarter 2012 was 9.7 percent. The REIT’s NOI for the same period was up 5.7 percent. Likewise, CBL’s leasing spreads increased more than seven percent and same-center NOI grew by 1.5 percent.

“Small mall REITs have done very well this year,” Sullivan says, adding that he has a Buy rating on CBL, which is up almost 30 percent year-to-date. “They underperformed last year because investors were happy to put money into companies like Simon. It took the market a while to get comfortable with the middle-market players because they wondered if the smaller REITs were going to recover. They had to see that the improving metrics were sustainable.”

Coppola says Macerich has been “a little bit stingier” in terms of the rents that the REIT is willing to accept because “we are in a very strong landlord oriented market today.” Even so, the company was able to achieve an average re-leasing spread on a trailing 12 month basis of 15.8 percent and record positive same-center NOI for the ninth quarter in a row. “I foresee this being a landlords' market for quite the foreseeable future… the next three to five years,” he added.

Green Street Advisors says mall same-property NOI growth should accelerate in the coming years as sizable retailer sales gains are reflected in growing rental rates and occupancy ticks up modestly. “Our forecast of steady and solid NOI growth hinges on an expanding economy,” the firm explains. “That said, long periods of NOI growth have occurred before in the mall space despite economic hiccups.”

New mall projects are few and far between, which certainly contributes to high occupancies and the REIT’s ability to push rents. In fact, five-year supply forecast for mall properties has never been so low, according to Green Street Advisors.

Taubman Centers Inc. (NYSE: TCO) recently completed the $75 million City Creek Center in Salt Lake City, Utah. The Bloomfield Hills, Mich.-based REIT says the mall will be accretive to earnings this year, adding about $0.05. It is expecting a 12 percent return on the property for the first full 12 months of operations.

Taubman is also behind the only other new mall on the horizon. The $350 million project, University Town Center, is located in Sarasota, Fla., and will be anchored by Saks, Macy's and Dillard's.

Construction on the 900,000-square-foot center will begin later this year, and the project is expected to open in the fall of 2014. Taubman anticipates an 18.5 percent unlevered return on its investment.

Because of the lack of new mall opportunities, most regional mall REITs are focused on redevelopment to spur their external growth. This means that the companies are renovating, updating and improving their existing properties, and in some cases, taking advantage of excess acreage to expand the properties. Moore says redevelopments are “very lucrative”, achieving yields of 9 to 12 percent.

“When you consider the internal growth, coupled with external growth from redevelopment, expansions and outlet centers, plus any acquisitions, we could see high single-digit FFO growth in the sector going forward,” Moore predicts. “I don’t have any real concerns about the regional mall REIT sector at the moment and certainly not in the long-term.”