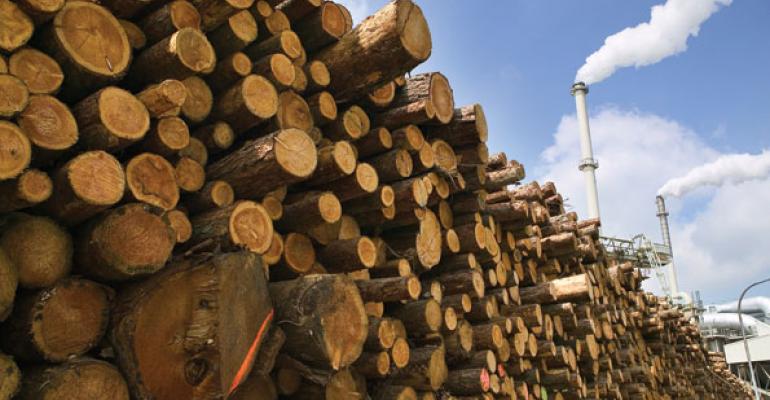 Over the past several years the timber industry has had to withstand some strong headwinds, not the least of which is the ongoing weakness in the housing market. That weakness, coupled with a severe drop in demand for paper products, most notably newsprint, has created a challenging environment for the industry.

Timber REITs have not been immune to the pressures, and their performance has suffered. Yet both REIT executives and analysts contend that things are looking up for the timber industry; timber REITs in particular. “We think timber will be a very strong asset class moving forward and timber REITs will experience some good growth,” says Steve Chercover, an analyst with Davidson Companies in Portland, Ore., which focuses on timber REITs and paper products manufacturers.

While timber is used primarily for building materials—such as lumber and the production of paper products including newsprint, toilet paper, cardboard and paper towels—there are new demand drivers for timber that previously did not exist. Chercover points to the promise of increasing demand from Asia and the growth in “biomass” in Europe, which requires wood pellets to create energy.

These new sources of demand, together with an improving residential market and decreased supply from Canada, translate into a strong growth story for timber REITs.

According to some, timber REITs are undervalued today: All four of them are trading at a discount to their net asset value. And new investors have been reluctant to allocate funds to the sector. “It’s been a tough few years for timber REITs, but we’re closer to the end of the tunnel—we’ve already been run over by the train,” Chercover quips, adding that timber REITs deserve investors’ attention.  “Timber REITs offer upside potential.”

Timber is a unique asset class. It’s a natural resource, but unlike natural resources such as gas and oil, it is renewable. Assets (trees) continue to grow and appreciate in value and throw off cash flow when they’re harvested. Owners have the flexibility to adjust harvest levels and product supply as markets change—preserving prices and preventing an oversupply of inventory.

Because timber is grown on land and generates revenue, it is appropriate for the REIT structure. There are four timber REITs—Plum Creek (Ticker: PCL), Potlatch Corporation (Ticker: PCH), Rayonier (Ticker: RYN) and Weyerhaeuser Company (Ticker: WY).

Their collective market cap is $22.4 billion—one of the smallest REIT sectors, according to SNL Financial, yet these companies are goliaths in their own right. Plum Creek, for example, is the largest owner of timberland in the U.S., with 6.6 million acres. 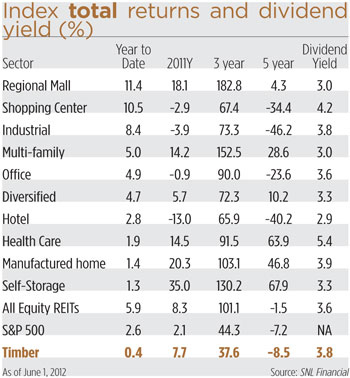 While the REITs have been under pressure (Potlatch, for example sold some land to pay its dividend before cutting the payout), the outlook for U.S. timber REITs is positive, some argue.

Historically, Canada has provided 35 to 45 percent of all lumber used in the U.S. Roughly 90 percent of Canada’s productive forest land is owned by local or federal governments, which have imposed limits on forest harvesting, up to 20 percent in Eastern Canada.

Even more important is the tiny mountain pine beetle, which has gnawed its way through 45 million acres of Canadian timber—roughly the size of Wisconsin. While certainly a tragedy for our northern neighbors, the loss of Canadian timber is a boon for U.S. timber REITs. The voracious beetle is projected to lower North American lumber supply up to 15 percent over the next few years, and timber experts say timber REITs will be called on to replace that supply.

At the same time that supply is diminishing, demand is increasing domestically and abroad. China, for example, is the largest importer of wood in the world, and its demand is growing at a 7 percent compound growth rate annually.

Right now, China gets the bulk of its wood products from Russia and New Zealand. However, those countries have been unable to keep up with its appetite, and it has been forced to look to the U.S. to supplement its supply.

Rick Holley, president and CEO of Plum Creek, says the impact of Chinese demand on West Coast markets has been “meaningful” over the last two years. Plum Creek, for example, exported approximately 55,000 tons to China from Oregon.

Beyond China, timber REITs are positioned to take advantage of the growing demand from Europe for biomass. To meet 2020 electricity goals, countries are mandating transition from coal-generated electricity to bioenergy, which uses wood pellets. For example, Plum Creek recently announced it had inked a deal to provide 13 million tons of wood to a European utility provider starting in 2013.

Here at home, timber REITs are anticipating increased demand from the housing sector, both single-family and multifamily. Recent data from the U.S. Commerce Department indicates that U.S. home building grew in April 2012, with year-over-year starts up nearly 30 percent to a seasonally adjusted annual rate of 717,000.

In addition, after several years of little or no new apartment construction, development activity has ramped up significantly. Annual multifamily permits increased by 48.5 percent during April 2012 compared to 12 months earlier, representing six consecutive months of annual permitting above 200,000, according to the U.S. Census Bureau. Moreover, Dallas-based apartment research firm Axiometrics is tracking about 2,500 planned projects totaling more than 700,000 units in 196 markets.

“Each of the timber REITs has its own growth opportunities—from U.S. housing to Asian demand to specialty fibers to bioenergy,” Chercover argues. “You have to decide which part of the economy you want to bet on.”