Michael Kitces' #FASuccess Podcast: Jonathan Kuttin on Getting Advisors Out of the Business of Prospecting

Kuttin Wealth Management's Jonathan Kuttin describes how his business grew more by getting advisors completely out of the prospecting business and focused on the client experience. 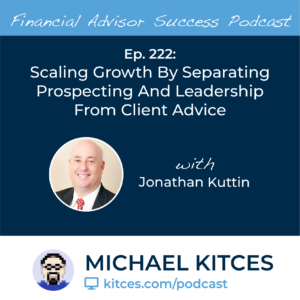 Welcome back to the 222nd episode of the Financial Advisor Success podcast!

My guest on today’s podcast is Jonathan Kuttin. Jon is the founder of Kuttin Wealth Management, a hybrid RIA headquartered on Long Island, N.Y., that manages over $3 billion for about 5,500 clients.

What’s unique about Jon, though, is that as his firm grew to the point where it became necessary to separate client service from leadership and operation of the business, Jon did not hire a COO to run the firm, and instead made a deliberate decision to move himself away from a client-facing role of working in the business so he could spend all of his time working on the business and developing its systems and culture instead.

In the episode, we talk in depth about how Jon has carved out three distinct roles within his firm that allow employees to focus solely on what they’re good at (creating both superior results and clarity around responsibilities within the firm itself), why Jon has found that the business is growing better by getting his advisors completely out of the prospecting business and focused on delivering an amazing client experience, and how Jon has powered the growth of the firm by separately building a CPA referral program to bring in prospects that his advisors then close by leveraging the “borrowed trust” they receive from the CPA referrals.

We also talk about the way the “entrepreneurial itch” influenced Jon’s decision to leave his salaried management role at Ameriprise to start his own practice, how once Jon achieved financial security for himself and his family his focus and drive shifted toward helping people within his organization get what they want out of life, how Jon has carried lessons that he learned early on around fostering a strong culture and developing leaders throughout his career, and the “WDYWFY” question of “What Do You Want For Yourself” that Jon has found to be the most effective way to build both loyalty and a culture that really cares about and values the people within the organization.

And be certain to listen to the end, where Jon shares the challenges that still come along the way of scaling an advisory firm by nearly 100X from $30M to $3B over the past 20 years, why Jon felt it was necessary to transition the firm to a vision-based culture that didn’t require him to make every key decision, how Jon learned that having integrity still isn’t a substitute for also having key legal agreements in place after a key partner broke up with the firm and took away a significant segment of clients and revenue, and the five levels of leadership that Jon tries to cultivate in all the leaders of the firm—including himself —as he looks to continue growing in the decades to come.

So whether you’re interested in how Jonathan forged productive relationships with CPAs who actively refer clients to his firm, why he’s focused so intently on culture as a key part of his organization, and why getting his advisors out of the business of prospecting has allowed his firm to scale even faster, then we hope you enjoy this episode of the Financial Advisor Success podcast with Jonathan Kuttin.