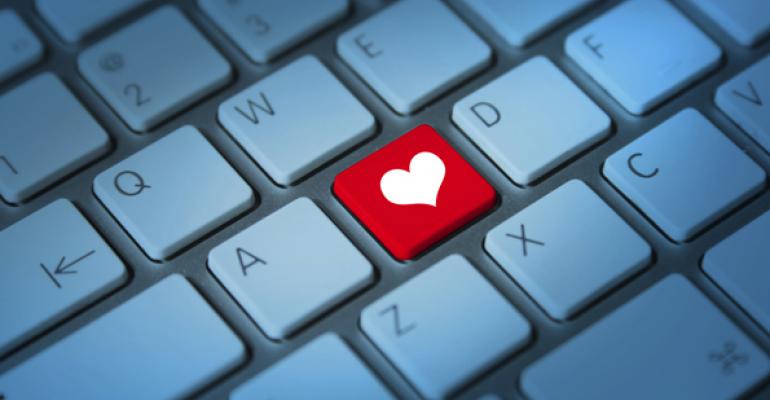 Philanthropy Is About More Than Just Tax Breaks

The economic benefits related to giving are perhaps the most misunderstood motivators of charitable gifts.

In today’s world where there’s no shortage of financial and estate-planning tools to help facilitate and maximize charitable gifts.

It’s vital not only to understand the economics of larger charitable transfers but also to recognize that to the vast majority of philanthropically inclined clients, tax and other economic considerations are a means to an end and rarely serve to motivate the gift itself.

In reality, virtually every gift is made as a result of a unique mix of motivators, and they’re often intertwined. It’s rare to encounter just one motivator. Most larger charitable gifts, whether current or deferred, tend to involve complex relationships among a number of these factors. Understanding the interconnection of motivations is a major key to helping clients determine the way to give what’s best for them.

For instance, commentators have predicted that recent charitable growth may slow down or reverse in light of the Tax Cuts and Jobs Act of 2017. History reveals that giving levels have indeed slowed in the past when the value and/or utility of the federal charitable income deduction has been reduced due to federal tax law changes. These declines have always proved to be limited to 1 year at most, with renewed growth resuming as individuals and their advisors quickly adapt to the changes. The chart below shows the impact of major tax legislation in 1969, 1981, 1987, 1993 and 2001. In 1987, giving decreased in large part because of the acceleration of giving into 1986 prior to tax rate decreases slated for 1987. The same might reasonably be expected for 2018 as a result of widespread gift acceleration in 2017. 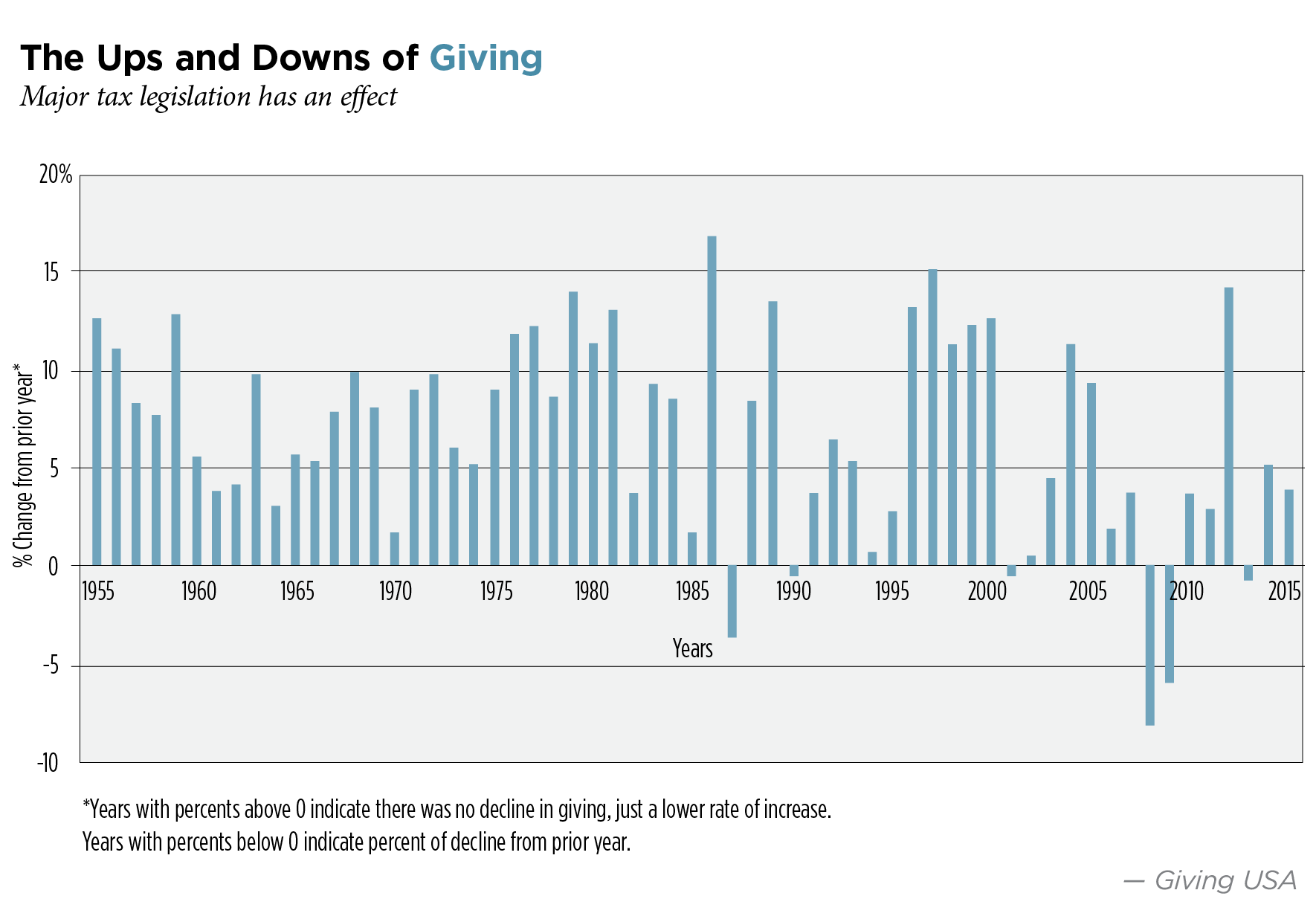 However, the Act has affected charities in ways not experienced previously, and its impact on charitable giving is somewhat less certain. Unlike other widely used deductions, such as mortgage interest and state taxes, the charitable deduction itself escaped the impact of tax reform relatively unscathed. In fact, the amount that can be deducted in the case of cash gifts actually increased from 50 percent of adjusted gross income to 60 percent. On the other hand, the value of the deduction was reduced a maximum of 2.6 cents per dollar donated due to the decrease from 39.6 percent to 37 percent in the top marginal tax rate.

Many still predict a negative impact from the Act because of the doubling of the standard deduction, which will significantly reduce the number of individuals who’ll be able to deduct charitable gifts; so, more gifts will come from after-tax dollars. This shift will result in an effective increase of 50 percent or more in terms of cash required to make a charitable gift.

Importance of Other Motivators

As mentioned above, history teaches us that even when tax law changes increase the after-tax cost of charitable gifts, giving tends to quickly recover and resume long-term growth trends. Why? In my experience, having observed the aftermath of tax law changes affecting charitable giving since 1981, two primary factors are in play:

One only needs to look to the vital role of voluntary investment of income and assets in support of nonprofits meeting various societal needs prior to the existence of income and/or estate taxes and the government agencies that collect and spend those taxes. Many of America’s universities, museums, houses of worship and other nonprofit facilities were built with dollars voluntarily contributed prior to the existence of income taxes and the charitable deduction.

While tax and economic consequences of giving are undeniably of great importance when deciding the amount of a charitable gift, the property used to make it and the way it’s structured, it’s also important for advisors to be mindful of the broad array of other motivating factors in play in the case of virtually every gift. Let’s examine a number of other important non-tax motivators.

In 2016, the most recent year for which figures are available, 32 percent of all charitable gifts went to religious organizations. Religious-based entities received twice as much as higher education, the next largest category. In terms of household giving, religious households, on average, contribute double the amount of those with no religious affiliation.

Those who advise individuals who are considering making charitable gifts should, as a result, make every effort to understand those individuals and the influence their religious beliefs may have on the ways they choose to make gifts.

For example, a number of religious traditions teach that the greatest spiritual fulfillment when giving is experienced by making gifts anonymously. With such a donor, a naming opportunity or other public recognition for a gift may be a nonstarter.

Note that tax and economic factors can still be important when deciding how much and what to give, even if they aren’t the primary “why” underlying the gift. An individual who gives from a religious motivation may well still be interested in ways to give that maximum advantage of tax laws that encourage and make larger charitable gifts possible.

Quite different emotions, however, may motivate donors who seek recognition or notoriety for themselves.

In fact, because emotions can be so powerful, it’s important for professional advisors to take time to explore and help satisfy donors’ emotional motivations while also helping to preserve the donors’ own economic well-being. This is when carefully structured gifts can play an important role. Instead of a large outright gift at an advanced age, for example, it may better serve an individual to fund a charitable remainder trust or other split-interest gift using highly appreciated, low yielding assets. This can result in a significant gift while increasing retirement income and availing the individual of income and capital gains tax savings, and at the same time, setting aside funds for future use in a way that’s more advantageous than a testamentary gift that will provide little or no tax savings as a result of the increased exemptions ushered in by the Act.

People with few religious convictions who pride themselves on acting rationally in all spheres of their lives may still be motivated to make philanthropic gifts. Many individuals hold definite ideas about social responsibility, including the duty to share their wealth with others through voluntary investments in arts, education, the environment and other nonprofit endeavors they see as vital for a healthy society.

Today, as in the past, various legal structures such as family foundations, donor-advised funds and charitable lead and remainder trusts have been developed to help facilitate and perpetuate socially motivated charitable giving.

Closely allied but somewhat different from social motivations are gifts that are rooted in adherence to political belief systems. Some individuals, for example, are opposed to government taxation and spending for other than a narrow range of activities restricted to courts, military and other purely public needs.

Understanding where clients fit on the political spectrum can be key to helping them decide whether, when and how to make charitable gifts.

Individuals who give primarily from political motivations are often among those most interested in how government addresses taxation of funds devoted to charitable purposes. Such individuals can be expected to vigorously oppose efforts to tax funds devoted to charitable purposes by a government that simultaneously seeks to limit taxation and spending on social needs. This fact has in no small measure been reflected in the healthy debate over how recent tax reforms treated the charitable deduction and will be the basis for future discussion as well.

The economic benefits related to giving are perhaps the most misunderstood motivators of charitable gifts. While it’s true that there are significant tax and other financial benefits associated with certain types of gifts, it’s a mistake for advisors, lawmakers and others to assume these factors are the primary motivator for gifts. Remember that donors receive the same tax benefits regardless of the recipient(s) of their charitable gifts, and at best, a gift of cash saves a donor just 37 percent in federal income tax and costs him $.63 per dollar donated if he’d kept the funds for his personal use.

This is why fundraising efforts based primarily on tax and other benefits often fall on deaf ears and seldom produce meaningful or long-term results. In fact, such efforts may simply serve to educate donors who then decide to complete gifts with other charitable interests pursuing missions that more closely align with their true donative intent that’s rooted in the other motivators previously discussed.

The most successful nonprofit fundraisers know the importance of non-financial motivations and thus tend to put the “gift” before the “plan.” They know it’s difficult, if not impossible, to transform even the best “what,” “when” and “how” into the “why” behind a gift. Those advising clients in this realm are typically involved primarily with the what, when and how of a gift, but can often better serve their clients by taking the time to better understand their underlying motivations relative to how they may impact the structure of a gift.

This is an adapted version of the author’s original article in the October issue of Trusts & Estates.