As the dust settles from the Great Recession, many observers are still assessing its impact on any number of industries. The non-profit sector is no exception.

During the depths of the economic downturn, we noticed that the economic dislocations seemed to be affecting charitable organizations and institutions very differently, depending on their mission, location, size and other factors. At the time, there was much speculation about what was causing some organizations to experience dramatic decreases in funding, while others seemed to hold their own or even continue to grow.

Now that individual giving has largely recovered to pre-recession levels and data is becoming available from the Internal Revenue Service and other sources, a picture is emerging that sheds a bright light on the past, present and perhaps the future of philanthropy in the United States.

In May 2016, I introduced the term, “gerontrophilanthroplutocracy” at the Boston non-profit national client conference of State Street Global Advisors, a leading provider of fiduciary services to the non-profit sector. The purpose of this term was to capture the attention of the attendees and to open a discussion of major shifts in the philanthropic landscape that have occurred in recent years. Let’s see how charitable giving has changed.

The Treasury Department recently released a compilation of data culled from tax returns filed by individuals in 2014.1 Among other information, it sets out amounts deducted as charitable gifts by adjusted gross income (AGI), age ranges and other factors. This data is very telling. Over the years, an average of 80 percent of all individual gifts are itemized on Form 1040. When the 2014 numbers are added to similar tax deduction data released for prior years, a very interesting picture emerges.

The data reveals that itemized giving by individuals declined by some 18 percent between 2007 and 2009, before beginning a gradual recovery to pre-recession levels. The decline and recovery haven’t been even over age ranges, however. “Itemized Deductions,” this page, shows the overall trend in itemized deductions from 2006 to 2014. 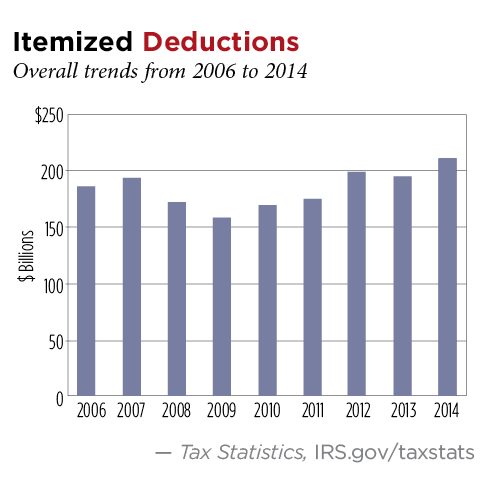 “Not So Generous,” this page, reveals that giving by those under age 55 has grown only 11 percent since the depths of the recession in 2009 and hadn’t recovered by 2014. 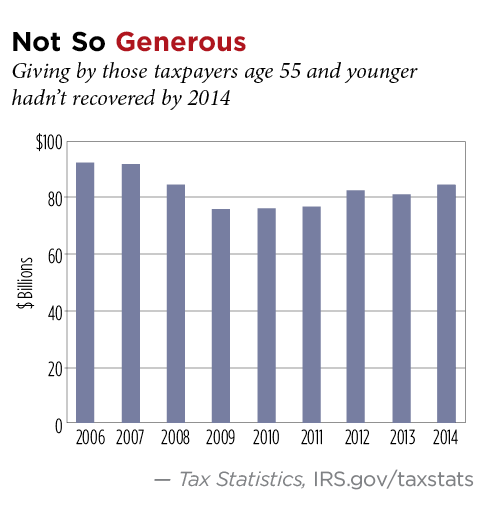 On the other hand, as illustrated in “Leading the Way,” p. 10, giving by taxpayers age 55 and over has increased by 53 percent since 2009 and has led the way in recovery. 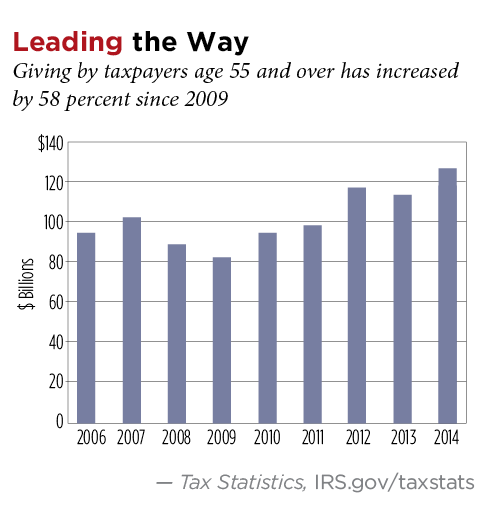 A comparison of the two age ranges shows these divergent trends in sharp relief, as illustrated in “Battle of the Age Groups,” p. 10. 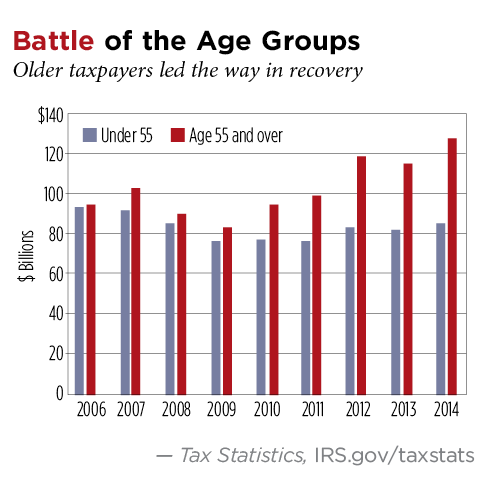 Eldest Lead the Way
Perhaps the most surprising fact revealed by the IRS data is the dominance of the 65 and older age group in charitable giving. In 2014, some $70 billion, fully 33 percent of the total donated and itemized in this most recently reported year, was given by individuals age 65 and over. This statistic is remarkable, given that this group of individual donors represents just 3 percent of Americans over the age of 21.

The next closest age range was 55 to 64, whose members donated some $56 billion.

Hence the appellation of “Gerontrophilanthroplutocracy.” It’s becoming increasingly evident that older Americans are leading the way in philanthropy. If it weren’t for them, the nation’s non-profit community would be enjoying a much less robust recovery if there was, indeed, any recovery at all.

This may foreshadow an unprecedented growth in philanthropy in coming years. The first Baby Boomers turn 70 this year, and the entire generation that now represents approximately 25 percent of the U.S. population will reach this age milestone over the next two decades.

What Are They Giving?

It’s also instructive to look at trends in giving during the Great Recession in terms of what was, and wasn’t, given.

IRS data2 reveals that there was relatively little change in itemized giving of cash during the recession, as shown in “Cash Giving,” this page. 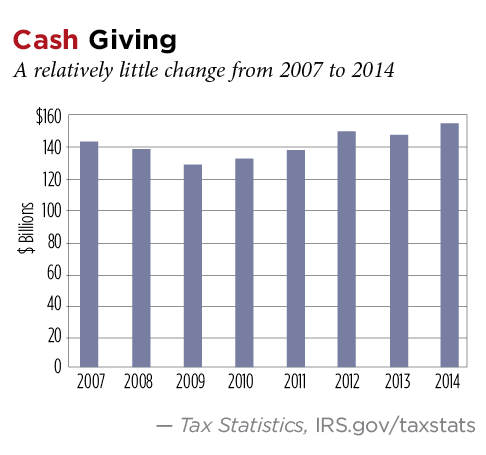 There were, however, significant shifts in giving when examining gifts of non-cash property, as shown in “Non-Cash Property,” p. 11. 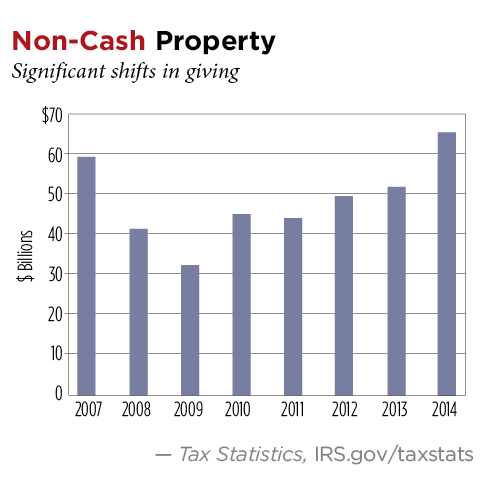 The collapse of investment and real estate markets during the recession thus accounted for a disproportionate share of the decline in giving, and market gains have driven the recovery as well.

Who makes these gifts of non-cash properties? IRS data reveals that the bulk of gifts of securities are also made by individuals age 55 and over, with just under 60 percent coming from those age 65 and over.3

One final piece of the puzzle is the trend in itemized giving by size of AGI. IRS data reveals that giving by those with incomes under $500,000 remained fairly unchanged during the Great Recession, dropping just 5 percent between 2007 and 2009 and growing every year since.

The bulk of the decline in giving during the recession—and the subsequent recovery—can instead be traced to those with AGI over $500,000. Taxpayers with AGIs over $500,000 reduced their giving by 44 percent, nearly nine times the reduction of those with household incomes below $500,000. (See “Higher Income Donors Explain Recession Giving Trends,” this page.) 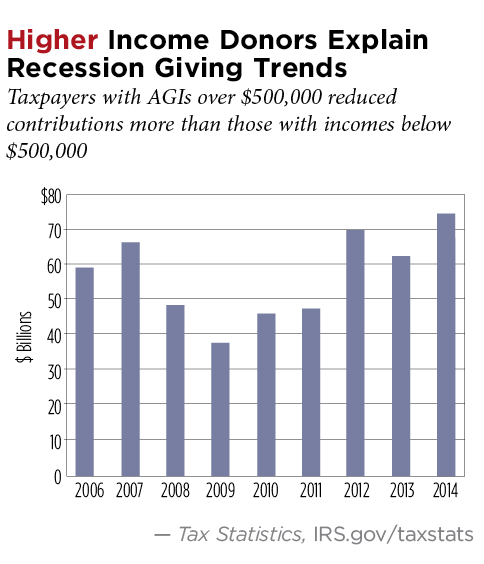 Hence, a reasonable observer could conclude that the nation’s non-profit community will, in coming years, be increasingly reliant on the wealthiest of seniors who will be giving primarily from non-cash assets. This trend appears to be a byproduct of the fact that the much discussed “1 percent” of the U. S. population is not only older than many may assume, but also making larger gifts primarily in the form of non-cash assets.

It’s vital that lawmakers be cognizant of this fact when considering future federal income tax policy. Proposals that would limit deductions for higher income taxpayers could lead to an unintended impact on a fragile recovery of charitable giving in the United States that’s already vulnerable to possible reversals of the increases in real estate and investment market proposals in recent years.

History reveals that the thousands of providers of vital non-profit services will continue to be funded during an uncertain future that could hold many surprises in terms of economics and political change reflected in tax policy, among other factors.

To maximize private funding of education, health care, religion, social services and the arts, however, charities and financial advisors must be prepared to help donor-clients structure gifts in new and creative ways.

The exigencies of age will increasingly collide with philanthropic desires as the Baby Boomers continue to grow older. Fortunately, there are many ways that creative gift planning structures can be used to help older, wealthier individuals make meaningful gifts they may not have otherwise thought possible.

Some examples include charitable remainder trusts to help with educational expenses or support of less economically secure loved ones and charitable lead trusts that can help fulfill philanthropic desires while transferring assets to the next generation and reducing or eliminating transfer taxes.

Advisors engaged in various legal and financial disciplines will increasingly play a critical role in helping clients balance personal and philanthropic priorities through blended gifts that meet current and future needs of both donors and the causes they wish to support.

Those who master this skill will be in greater demand than ever before by clients who wish to preserve their financial security while “voting with their dollars” through voluntary redistribution of wealth in ways that reflect their values, beliefs and aspirations.