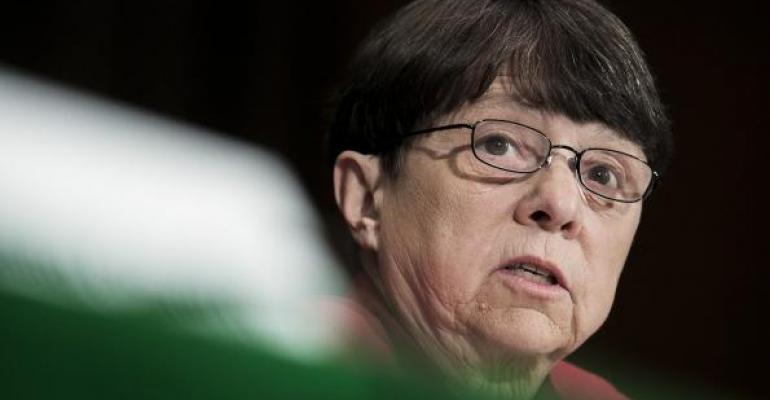 If SEC Chair Mary Jo White departs should Hillary Clinton win the election, the agency could slip into paralysis.

(Bloomberg) -- Political friction and vacancies in top posts at the U.S. Securities and Exchange Commission have increased the likelihood that Chair Mary Jo White could remain in the job beyond the end of President Barack Obama’s term.

White has privately told agency officials that people with ties to both the Hillary Clinton and Donald Trump campaigns have asked if she would consider staying on to give the next president time to pick a successor, said people familiar with the matter. White said she expects any holdover to be brief, according to one of the people who spoke to the SEC chief and asked not to be named because the conversation was private.

Should White depart when a new president is sworn in, Wall Street’s main regulator could slip into paralysis because it would be down to just two commissioners who vote on policy and enforcement actions. Democrat Kara Stein and Republican Michael Piwowar often disagree on market regulation and legal settlements with financial firms. There are two vacancies on the commission.

Still, keeping White around even temporarily could carry risks, especially for Clinton, because key members of the Democratic party’s liberal base consider the SEC chief to be too soft on the finance industry. In one sign of the opposition’s vigor, progressive standard bearer Senator Elizabeth Warren demanded earlier this month that Obama replace White even though he’s set to leave office at the end of January.

“No one working for, or volunteering for, our transition effort has been in touch with the chair of the SEC,” said Brian Fallon, Clinton’s campaign spokesman.

Both sides have opened transition offices in downtown Washington. Clinton and Trump are expected to move forward quickly on nominees to head the SEC.

Should Clinton win, the appointment of regulatory posts is expected to expose fissures within the Democratic party between liberals and more moderate, pro-business camps. The financial industry, which has contributed heavily to Clinton, is concerned about who gets picked to lead the Treasury Department, the National Economic Council and the SEC.

Meanwhile, Warren, a Massachusetts Democrat, and her allies want Clinton to nominate strong and independent overseers who won’t shy away from taking on banks and other corporations, especially in the wake of the financial crisis.

The SEC has also been in the sights of progressives because they want it to pass rules that would require companies to reveal their political spending -- a controversial plan opposed by many Republicans and businesses.

Though it is still early, those aligned with Warren are pushing SEC chairman candidates like Commissioner Stein and Gary Gensler, a former head of the Commodity Futures Trading Commission. Neither has said if they’d want the post. By staying on following a Clinton victory, White would likely be denying Stein a chance to run the commission as acting chairwoman.

White, a political independent, has led the SEC since 2013. White House spokesman Eric Schultz, responding to Warren’s request that Obama replace White, told reporters earlier this month that “the president continues to believe Chair White is the right leader.”

Any fight over the SEC chairmanship could be complicated by Senate politics. There are already two Obama administration nominees to fill open slots on the five-member commission who have languished for months. If those candidates aren’t confirmed when senators return to Washington for a short session following the election, the new president will either have to re-nominate them or choose two alternatives.

Traditionally, confirming an SEC chairman has not been a top priority for an incoming president or the Senate. That changed after the 2008 election when the financial crisis was in full swing and Obama’s first pick Mary Schapiro was confirmed days after he took office. Previous agency heads, however, had to wait a lot longer. President Bill Clinton’s SEC chairman Arthur Levitt didn’t start work until the end of July 1993, and Harvey Pitt, chosen by President George W. Bush, began his term on Aug. 3, 2001.