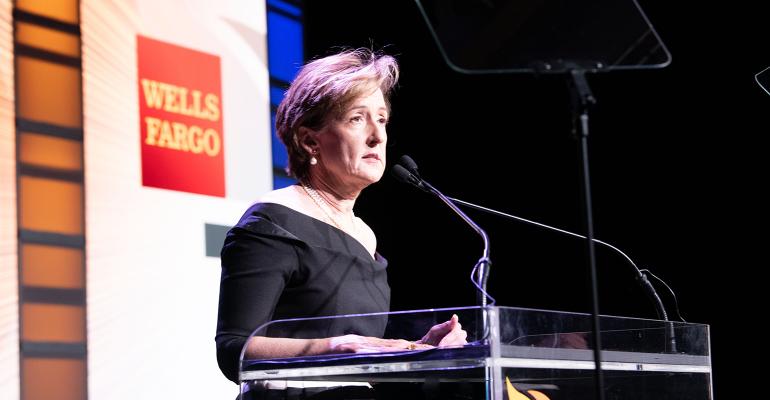 Mary Mack looked like a rising candidate to become Wells Fargo's next chief executive. That is, until the bank's board promised it would find a new leader outside the troubled bank.

Repeated promotions, assignments to tackle Wells Fargo’s worst abuses, and the board’s public praise in mid-March of her tenacity and progress fueled talk of her ascent. But when Tim Sloan abruptly stepped down as CEO two weeks later, the board promised it would find a new leader outside the firm. Now senior executives fret the recruit will bring in new people -- potentially sidelining Mack and even postponing the day when a woman reaches the top of a giant U.S. bank.

“When the new CEO comes in it’s certainly possible that they’ll want to install their own people, especially in the retail bank,” said Brian Kleinhanzl, an analyst at KBW, pointing to the division Mack runs. “That’s where all the regulatory focus is.”

Mack’s fate is drawing attention because there are so few women within reach of the CEO suite across the nation’s 10 biggest lenders. That harsh reality was spotlighted at a congressional hearing in April, where the heads of seven major banks were grilled about why their firms have yet to put a woman in charge.

The industry’s glass ceiling has long proven particularly thick. Elite financial firms didn’t welcome women into their partnerships until the 1980s. And even now, women are typically paid less than men. Publicly and privately, many describe a landscape still shaped by decades of discrimination, harassment and retribution.

Mack, 56, vaulted to public prominence in mid-2016 when Wells Fargo moved her from the top of its retail brokerage to run its even larger community banking division just weeks before scandals began erupting there. She’s since scrapped sales quotas and faulty incentives, pushed out regional managers and bolstered internal controls. She oversees more than 100,000 employees across the country.

When the board posted evaluations of several top executives ahead of its April annual shareholder meeting, it praised Mack more than her peers, citing her talks with regulators, work on risk controls and “focused, collaborative and effective leadership.” She “exceeded expectations,” the board wrote, noting that three other executives it named aside from Sloan “generally met” them.

Still, it’s far from certain Mack would’ve become the bank’s next leader. Sloan was expected to stay at least a few more years before pressure from regulators and lawmakers prompted his decision to step down. At that time, theoretical candidates also included Chief Financial Officer John Shrewsberry and wealth and investment management head Jon Weiss, among others, according to people close to the bank. (Weiss wasn’t mentioned in the board’s evaluations.)

If history is an indication, the board would have rotated contenders through top jobs for a few years before anointing a future leader. Sloan served as chief administrative officer, CFO, head of wholesale banking, president and chief operating officer before he took charge of the company.

Some senior executives still see a path for Mack or one of her peers to reach the top: Keep interim CEO Allen Parker, who joined as general counsel about two years ago. He could finish enacting measures to appease regulators, then hand control back to a banker such as Mack, Shrewsberry, Weiss or someone else to focus on revenue growth.

Yet some of the bank’s most powerful critics have argued for years it needs fresh leadership. And through that lens, Mack’s decades of experience there could be viewed negatively.

“Mary Mack should be the CEO of Wells Fargo, and if it wasn’t for the politics of the situation she would be the most qualified person in this country to take that job,” said Brad Blackwell, a senior executive in the bank’s home lending unit who retired last year. “She’s caught up in the fact that she was already at Wells Fargo, and therefore becomes disqualified from the perspective of the outside world.”

Parker and Mack -- who both grew up in Georgia -- appeared together this week at Minnie’s Food Pantry north of Dallas to make a donation. The nonprofit’s leader had asked for help during the company’s shareholder meeting, and on Wednesday she burst out crying when Parker arrived with a camera crew and said the bank will contribute $200,000 to a new facility. In brief remarks, Parker praised Mack.

“When I sat with Mary and I talked with Mary I was really struck by her innate goodness and her incredible enthusiasm, and I knew everything was going to be OK,” he said of their first meeting a few years ago. “She’s transformed the community bank from a sales culture to a service culture where we do our best for our customers every day.”

Mack has worked at Wells Fargo and its predecessors since 1984, when she joined First Union. It later became part of Wachovia, which stumbled in the financial crisis and sold to Wells Fargo.

There, she showed a knack for collaborating across business lines. She developed a working relationship with Carrie Tolstedt, then the head of the community bank. When Tolstedt announced in 2016 that she planned to retire, the bank picked Mack to take over the role. The turmoil left Mack facing two challenges: Clean up the business while working toward cost-cutting goals.

At an investment conference last month, Mack said an employee challenged her to name three things she hasn’t changed in her division. She struggled to come up with examples.

Outside the bank, there’s little consensus on whether Wells Fargo has done enough to address abuses that included opening accounts for customers without permission. Top shareholders including Warren Buffett have said they were satisfied with Sloan’s work, but lawmakers and regulators have complained reforms came too slow.

Within Mack’s division, the picture is also mixed: Some employees complain of high stress and low morale after waves of policy changes, investigations and firings, sometimes for infractions that occurred years ago. Yet according to the bank, voluntary employee attrition fell in 2018 to the lowest level in six years.

Some in the industry have been hoping the board will find a woman outside the bank to become CEO, but that’s hardly guaranteed. While recruiters are widely believed to be considering women in their search, so far most candidate names to emerge publicly belong to men.

“Clearly there is still more to do to increase diversity at our most senior ranks,” said KeyCorp CEO Beth Mooney, who in 2011 became the first woman to lead one of the country’s 20 largest independent banks. When jobs open up, it’s important to make sure that the most talented people -- women or men -- get opportunities to lead, she said.

For her part, Mack has indicated willingness to work with Wells Fargo’s next leader: “We’ve got a great opportunity to bring somebody in who can both accelerate the progress that we’ve made and bring something to the table,” she said at an investor conference last month. “We’ll be ready for whomever comes in.”

To contact the reporter on this story:
Hannah Levitt in New York at [email protected]