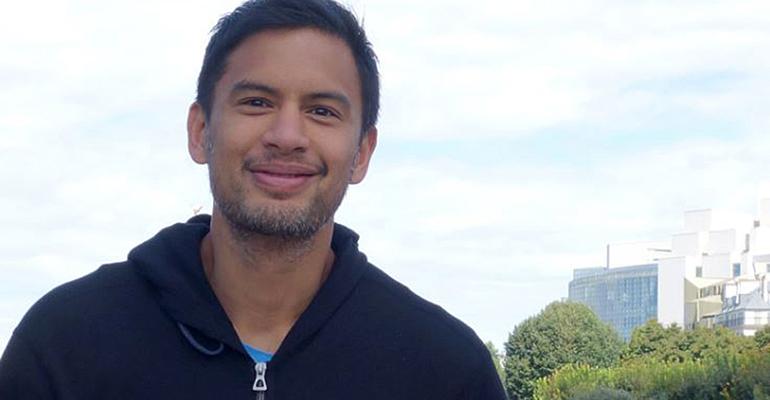 (Bloomberg) -- Khemaridh Hy, late of Wall Street, starts at 5:15 a.m. with a Snapchat selfie and a caption that says, “Time for daily practice. Be present in the now!” After 20 minutes of meditation, he heads for the elevator and posts a quote on Twitter by the philosopher Lao Tzu, the one that begins: “Stop leaving and you will arrive.” He strolls to a coffee shop and blogs about “ the number” -- the amount of money you need to amass to quit the business.

“If the number enables you to live off a bond-like profile, remember that you’re also short a put,” Hy types on his Macbook. “In the journey of life, don’t we want to be long-call options?”

Maybe it all comes off as new-age sap tinged with arcane finance jargon, and possibly indecipherable to most humans, but Hy devotees hang on every word. They figure he knows the secret: He left BlackRock Inc. when he was 35 and head of New York research at the firm’s $22 billion fund-of-hedge funds.

That was 17 months ago. Now Hy’s a preacher of sorts, his creed having to do with, as he puts it, “being your best authentic self.” He posts relentlessly on a mashup of topics, doling out advice -- take cold showers for mental resilience, eat only four units of dessert a week -- and writing expositions on, among other things, why skateboarders make good employees.

With a trifling 2,000 followers, you’d figure he’d be embarrassed. Then again, the who behind the numbers include at least one person at each of the top 60 hedge funds, representing roughly $675 billion in assets.

There’s no shortage of people who’ve abandoned Wall Street to try something entirely new. Hy’s choice is rather unusual: the “passion project” of sharing his personal-development tour with anyone who’s interested, at no charge. He’s living off savings, though he recently generated a bit of income when a handful of hedge funds brought him in to speak to their staffs. This month, he became the inaugural entrepreneur-in-residence at Quartz, an unpaid gig. Next month, he’ll up his exposure when he gives a TEDx Talk in London.

At this point, Hy certainly isn’t in the universe of a Tony Robbins or a Martha Beck or any of the other celebrity life-coaches and self-help writers. He’s not really treading new ground. Hedge-fund billionaire Ray Dalio, after all, has been into Transcendental Meditation for decades and attributes much of his success to it. (If you think that’s weird for a finance-world heavyweight, Bill Gross told the New York Times in 2009 that some of his greatest ideas came to him while he was standing on his head during yoga; back then, Gross was the world’s most successful bond-fund manager.)

Still, there’s something about Hy that’s striking a chord. His fans “are real people who follow and interact,” says Rich Rosenblum, former global head of oil-derivatives trading at Goldman Sachs and a onetime energy trader at Elliott Management Corp. “He puts a lot of sweat into his position as a hub of information with no clear avenue for self profit.”

Among Hy’s products is a Saturday e-mail in which he shares links to five articles from publications as diverse as 99U and the Oxford Handbook of Motivation that captured his attention. Rishi Ganti, founding partner of Orthogon Partners, says Hy’s curating is so valuable he forwards at least one article every week to friends and colleagues.

Some, though, say they tune in just because they they find his posts so bizarre, like his Facebook Live meditation video, which was 22 minutes of what pretty much looked like him sleeping.

Those people, Hy says, don’t bother him. He’s used to “passive-aggressive patronizing” from a crowd that takes a dim view because “what I’m doing is a mix of blogging and writing and not a company that’s making money.”

Money may not be the end-all for him, but having a fair amount made his break possible. He saved enough so he and his wife, an artist, and their 2-year-old daughter could live for at least three years of his not being fully employed without major lifestyle alterations. It helps that the family owns their Brooklyn apartment. Hy cites Nike Air Max sneakers and $70 James Pearse T-shirts as among his few vices.

What spurred his departure from BlackRock was a desire to “maximize productivity at life” (rough translation: live life to the fullest). Also, he might have been bored. “After 12 years, I’m like, hey, fixed-income strategies or statistical arbitrage don’t change that much. Once the money hit a certain point, I just wanted to do something different.”

Raised in New York City by a French teacher and a United Nations official from Cambodia, Hy earned a computer science-degree from Yale University. Next was a stint in investment banking with Broadview International, then a move to Treesdale Partners. BlackRock came in 2007, just before the chaos of the financial crisis. Group reshuffles led to battlefield promotions, shaving years off his path to managing director, which he achieved at 31.

But Hy says the magic was in his productivity tricks and networking skills. He researched the most-used words in English with more than four letters and created a BlackBerry shorthand alphabet, enabling him to type faster. He devised a relationship-management system to catalog thousands of people he met. At the moment, he says, 42 percent of the names in his database are “non-bros,” meaning women or racial or ethnic minorities underrepresented in finance and tech.

Now 37, with short-cropped salt-and-pepper hair, he spends at least four uninterrupted hours with his wife and daughter daily, and meditates twice. He reads about psychology, philosophy and wellness, with Soren Kierkegaard and Joseph Campbell among his favorite authors; when he listens to audiobooks, he does so at 2.5 speed.

His own recent writings touched on topics from the practice required to achieve inner peace to what he described as “finding joy in Uncomfortable Introspection.” He preaches about his realization that pursuing passions and having a day job in finance don’t have to be mutually exclusive. He is slightly obsessed with a dread of death, and what a person can learn from that.

In the meantime, he has a more mundane concern, which is what he’s going to do for his next act. Hy’s got a lot of things figured out, but he acknowledges at some point he’ll have to make money again, by somehow monetizing RadReads, starting a business or getting a job. He’s still trying to reconcile “the number."