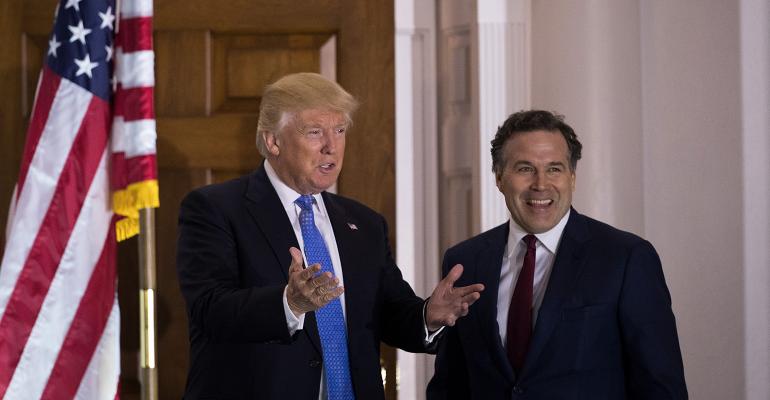 David McCormick, Wilbur Ross and Jonathan Gray are all in the running.

By Jennifer Jacobs and Arit John

(Bloomberg) -- President-elect Donald Trump interviewed top investment executives for the role of Treasury secretary as he stitches together the administration that will take over the White House in January.

David McCormick, president of the hedge fund Bridgewater Associates, also met with Trump. McCormick, a West Point graduate who served in the first Gulf War, later worked at Treasury and in the White House during the George W. Bush administration.

All three are in the running for Treasury secretary, said a person familiar with the hiring process. Steven Mnuchin, a member of the transition team’s executive committee, is thought to be the front-runner. The final decision could hinge on whether Trump opts for a loyal and known quantity -- Mnuchin was also the finance chairman of his presidential campaign -- or looks outside his inner circle.

Ross, who may be on the short list for Commerce secretary as well, spent about 30 minutes with Trump, with both men declaring it a “very good meeting.” Ross, who turns 79 next week, was involved in high-profile bankruptcy restructurings in the 1980s and 1990s, including those of Eastern Airlines and Drexel Burnham Lambert.

The “in-depth” discussion with Gray “included the economy, global capital markets and the world financial situation,” as well as “future legislation regarding the tax code and long-term debt,” Trump’s transition office said in a statement Sunday night.

Trump headed back to Manhattan on Sunday evening and had at least one more day of meetings scheduled.

“When the president-elect is ready to announce folks, he will,” spokesman Jason Miller said. “He wants to make sure he gets it right the first time.”

James Mattis may have the inside track to run the Pentagon after Trump gave the retired U.S. Marine Corps general a big thumbs-up for a second day, while 2012 Republican presidential nominee Mitt Romney, a former Trump critic, is under consideration to be the nation’s top diplomat.

Among those also said to be in the mix to run the Pentagon is former Texas Governor Rick Perry, who will meet with the president-elect on Monday, Trump adviser Kellyanne Conway said on Fox News. Perry, 66, is thought to be under consideration for a number of roles in the new administration. Miller declined to say which positions.

Trump met with Senator Tom Cotton of Arkansas on Nov. 18, also to talk about the defense position, said two people with knowledge of the meeting. Another of Trump’s meetings Sunday was with Marine Corps General John F. Kelly, former commander of the U.S. Southern Command.

Oklahoma Governor Mary Fallin will also visit Trump Tower on Monday, possibly as a candidate for secretary of the Department of the Interior, Conway said.

Not everyone who’s been meeting with Trump will be in his Cabinet, Conway said, describing the parade of visitors as a way for Trump to solicit advice and to demonstrate transparency.

“This is what outsiders do,” said Conway, who was Trump’s final campaign manager. “What do we have to hide?”

‘Real Deal’
Mattis, who rose from rifleman to U.S. Central Command leader, spent about two hours at the golf resort on Saturday with Trump and Pence. In brief remarks on Saturday Trump termed Mattis, 66, a “great man.”

“The President-elect and Vice President-elect were very impressed in their meeting with the ‘real deal’ and American hero General James Mattis,” Trump’s transition office said in a statement. “They had an incredibly in-depth conversation on plans for national security.”

Romney, who called Trump “a phony, a fraud” during the 2016 campaign, now appears to be at the top of the list to become secretary of state.

Pence told “Fox News Sunday” that the former Massachusetts governor and private equity executive is “under active consideration.” Romney, 69, spent about an hour with Trump and Pence on Saturday, and also spent time alone with the president-elect.

“It was a cordial meeting but more importantly, it was a very substantive conversation,” Pence said.

Trump, 70, decamped from his midtown Manhattan penthouse on Friday afternoon to the upscale club in New Jersey’s horse country, about 50 miles (80 kilometers) to the west. It sits on the former estate of automaker John DeLorean and features two 18-hole courses designed by renowned architect Tom Fazio. It’s scheduled to host the 2017 U.S. Women’s Open tournament.

Trump said his wife, Melania, and their son, Barron, would join him in Washington when the 10-year-old has finished the school year. The New York Post reported on Sunday that the future first lady and the youngest of Trump’s five children would continue to live in the Trump Tower penthouse in midtown Manhattan.

Besides Romney, Trump’s short list to become the nation’s top diplomat is said to include former New York Mayor Rudy Giuliani, Senator Bob Corker from Tennessee, John Bolton, a former U.S. ambassador to the UN, and Nikki Haley, the governor of South Carolina.

On Nov. 18 Trump tapped three campaign loyalists, whose positions lie outside the conservative mainstream, to positions that could drive the nation’s immigration and intelligence agenda. He picked Alabama Senator Jeff Sessions for attorney general, Representative Mike Pompeo for CIA director, and retired Lieutenant General Michael Flynn as national security adviser. Contentious hearings are possible in the Senate for Sessions and Pompeo; Flynn’s appointment is not subject to confirmation.

President Barack Obama, speaking in Lima on Saturday while attending the Asia-Pacific Economic Cooperation meeting, said Trump’s administration shouldn’t be prejudged. At a town hall meeting, Obama urged the world “not to make immediate judgments, but give this new president-elect a chance” to put his team together.

Others who met with Trump on Sunday included Representative Cathy McMorris Rodgers of Washington state, the only woman currently in a Republican congressional leadership post; T.W. Shannon, former speaker of the Oklahoma House of Representatives; Giuliani; New Jersey Governor Chris Christie and Kris Kobach, the Kansas secretary of state.

Ari Emanuel, Hollywood agent and brother of Chicago mayor and former Obama chief of staff Rahm Emanuel, also stopped by on Sunday. “Great guy. Great friend of mine,” Trump told reporters as the pair appeared on the clubhouse’s front porch.