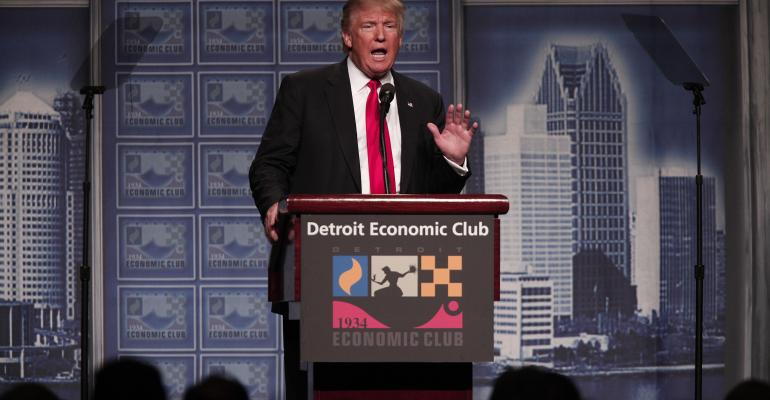 (Bloomberg) -- Donald Trump on Monday sought to cast Hillary Clinton’s economic program as an ineffective relic, and to reset his own presidential campaign after a string of missteps.

“We now begin a great national conversation about economic renewal for America,” Trump said in a speech to the Detroit Economic Club, urging a return to his “America-first” governing vision.

“The city of Detroit is the living, breathing example of my opponent’s failed economic agenda,” Trump said.

Protesters repeatedly interrupted Trump, who acknowledged them more calmly than he sometimes has at campaign rallies. “This is all very well planned out,” he said.

Trump announced major changes to his plan to slash individual income-tax rates, taking the top rate to 33 percent. While that’s higher than the 25-percent top rate Trump had initially proposed, it still represents a cut from the current top rate of 39.6 percent.

Trump initially proposed three tax rates—down from the current seven—of 10 percent, 20 percent, and 25 percent. His new rates—12 percent, 25 percent, and 33 percent—mirror those proposed by House Republicans under Speaker Paul Ryan in June. Trump pledged to work with Ryan and others on the tax plan, but added that “we will develop our own set of policies and assumptions” and will disagree in some areas.

“For many American workers, their tax rate will be zero,” he said.

Trump’s tax changes, combined with regulatory overhauls and plans to boost the domestic energy industry, will push U.S. economic growth to 4 percent annually, said economist Stephen Moore, who’s advising Trump’s campaign. Growth at that rate would help cut the revenue cost of Trump’s tax plan—which some analysts had pegged at roughly $10 trillion over 10 years—to less than $2 trillion or so over the decade, Moore said.

At the same time, the child-care proposal represents a new expense; Moore said it would be roughly $20 billion a year. “It's not a big cost,” he said.

For businesses, Trump’s tax plan would slash the rate on corporate and business income to 15 percent, down from a current top corporate tax rate of 35 percent. Members of partnerships, limited liability companies, and other so-called “pass-throughs,” who currently pay regular individual tax rates on their business income, would see a significant cut under the plan.

Trump would also end corporations’ ability to defer paying taxes on their overseas income, though he’d subject that income to a still-lower tax rate of 10 percent. That lower rate would give companies incentive to return more than $2 trillion in foreign earnings to the U.S., Trump said, and would “end job-killing corporate inversions” by removing an incentive for them. In inversions, U.S. companies shift their tax addresses offshore by merging with foreign companies.

Trump said the rich would pay their “fair share”—language more commonly heard from Democrats—but added that no one would “pay so much that it destroys jobs” or undermines U.S. competitiveness.

“No one will gain more from these proposals than low-and-middle income Americans,” he said.

Still, Trump’s proposals to cut individual tax rates and the tax rate on income from partnerships, along with eliminating the estate tax, mean the wealthy would pay less under his plan, said Kyle Pomerleau, director of federal projects at the conservative Tax Foundation.

“His rhetoric is not lining up with his proposals,” Pomerleau said.

Trump cited his intent to eliminate some “special-interest loopholes” that have benefited Wall Street investors. He mentioned his call for ending the special tax treatment of carried interest, the portion of investment gains paid to fund managers.

The speech, which Trump read off a teleprompter, was a product of consultation with his economic advisers, led by policy director Stephen Miller.

“Recently, at a campaign event, Hillary Clinton short-circuited again—to use a now-famous term–when she accidentally told the truth and said she wanted to raise taxes on the middle class,” Trump said, referring to the “short-circuited” phrase Clinton used when answering a journalist’s question about her private e-mail server last week.

Trump painted a picture of Detroit “roaring back.”

“We will put American steel into the spine of this nation,” he said. “Americanism, not globalism, will be our new credo.”

Trump reiterated his opposition to the Trans-Pacific Partnership trade deal and his desire to renegotiate Nafta, or walk away from the agreement if necessary. Trump said that he’s not interested in isolation, but in “great and well-crafted trade deals,” and that voting for Clinton would amount to voting for TPP, even though the Democrat now opposes the deal.

Trump also seeks to reverse much of the Obama administration’s climate-change and energy agenda by defending the coal industry, rescinding environmental rules, and asking TransCanada to renew its Keystone pipeline permit application if he’s elected.

After Trump said Aug. 2 he would double Clinton’s infrastructure spending plan in a major government expansion, aides said he will speak later this summer about his plan for the nation’s roadways.

Trump’s daughter’s acknowledgement of soaring child-care costs, an issue of growing importance in U.S. politics, won plaudits as Trump lags Clinton badly in polls of female voters. The nominee credited Ivanka by name during his speech.

Child-care bills have proven to outpace rent and tuition costs in most U.S. states, often threatening to derail parents’ housing and job plans. The nation is the third-most expensive for childcare among 34 countries, according to 2012 data from the Organisation for Economic Cooperation and Development.

The issue offers a good example of the candidates’ different approaches. Where Trump is providing a simple supply-side prescription, Clinton is flooding the debate with detail.

Her proposal includes tax relief but is more focused on government support and broader investments in early childhood education, while pledging to ensure that no family has to spend more than 10 percent of income on high-quality care.

Unveiling the council and the better-than-expected fundraising results, and giving the Detroit speech major billing, were moves by the Trump campaign to steady its course after the Democratic National Convention, where the Muslim parents of a slain U.S. soldier spoke out against Trump and drew the Republican nominee into a multi-day feud on Twitter and TV airwaves.

Between that and other controversies—including Trump’s initial refusal to endorse Ryan for re-election—Trump has seen his poll numbers slumped and has worried Republicans who are eager to save their majorities in Congress in November’s elections.

Trump’s plans align in many ways with the election-year policy proposals rolled out by Ryan and House Republicans, including his call for undoing the 2010 Dodd-Frank Act and limiting any regulations that burden businesses. The House plan wouldn’t allow any new financial regulations to take effect unless the House votes.

Trump, however, has proposed deeper corporate tax-rate reductions. Under the House plan, corporate tax rates would be lowered from 35 to 20 percent.

—With assistance from Billy House, Lynnley Browning, and Michelle Jamrisko.