/sites/all/themes/penton_subtheme_wealthmanagement/images/logos/footer.png
Recent
Recent
Hybrid Work Was Supposed to Create the Best of Two Worlds. It’s Turning Out to be a Challenge for Office Tenants
May 25, 2022
Eight Must Reads for the CRE Industry Today (May 26, 2022)
May 25, 2022
Cresset and Meristem Merge to Create $27B AUM Multi-Family Office
May 25, 2022
Know the Rules: State Residency and Taxation for Individuals, Trusts, and Estates
May 25, 2022
Featured
The 10 Best and 10 Worst States in Which to Retire in 2021
Jul 15, 2021
Poll: 15 Classic Books on Investing and the Markets
Apr 03, 2020
Fifteen Must-Listen Business Podcasts for Advisors
Aug 14, 2020
Celebrity Estates: Jay Leno and Planning for Classic Car Collections
Feb 22, 2022
Ten to Watch
brought to you by 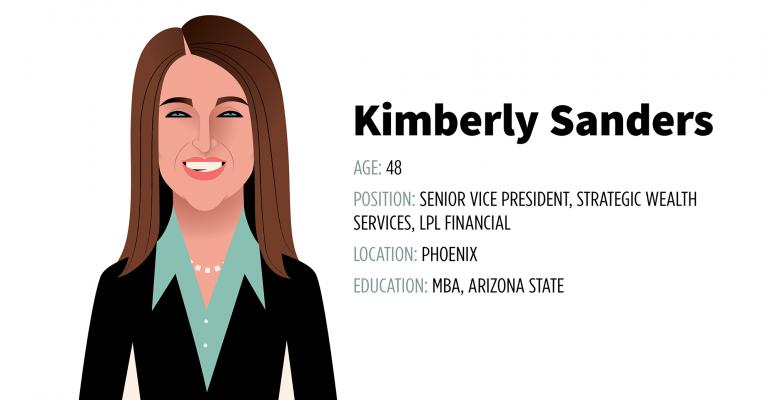 Ten to Watch in 2021: Kimberly Sanders

She’s referring to the industry trend behind the decision to build out that firm’s premium affiliation model, which will bring in breakaways that want to own their own businesses but don’t really want to run them. Before joining LPL, Sanders worked with plenty of cowboys, having launched and led business startup consulting at Schwab, catering to registered investment advisors who had “more of the desire to truly build” a business.

Those were entrepreneurs who wanted to be the CEO of their firm and were just looking for some guidance. By and large, the advisors who were going to make that move (the aforementioned cowboys) have already done so.

So LPL’s Strategic Wealth Services is intended for a slightly different, underserved market. Officially launched in April, it aims to take some of the more entrepreneurial tasks involved in starting and running a practice off advisors’ shoulders. It’s largely intended for regional and wirehouse advisors who have high production, manage more than $200 million in assets and think to themselves: “I want to monetize the business now, and again later. I want to own my clients and business. Have freedom, flexibility and control, but I have no interest in running this business.”

In exchange, they’ll custody assets at LPL and operate under that corporate RIA. “These guys aren’t sitting at home with this itch to be an entrepreneur/CEO and write their own business strategies,” she said. “They just want to serve their clients and grow the business.”

Several large firms, including Dynasty Financial Partners, Hightower and Focus Financial, have similar models, but those are in the RIA space; SWS is the first such initiative in the IBD space.

These advisors may want to go independent but often simply end up floating from one employee channel to another. “Maybe they take a check and change the brand on the door, but they haven’t achieved what they really wanted, and that’s what we’re trying to help them with,” Sanders said.

The program is constructed based on Cerulli research data on the top reasons wirehouse advisors don’t move to independence, with No. 1 simply being lack of time to run the business.

SWS looks to solve this problem by offering advisors free transitional services that include planning for the exit from their current firm to onboarding clients to the LPL platform. The IBD assists advisors with securing real estate, installing and integrating technology, being compliant-ready and developing the firm’s brand. After the advisor has transitioned, LPL then gives ongoing support with a chief financial officer consultant, a senior marketing strategist, tech support, remote administrative assistants and a service team.

Launching the program during a pandemic wasn’t part of LPL’s plan, but Sanders says there have been unexpected benefits. Advisors were already out of the traditional office environment, and some questioned the cut home offices take of their production to pay for office space they suddenly couldn’t use.