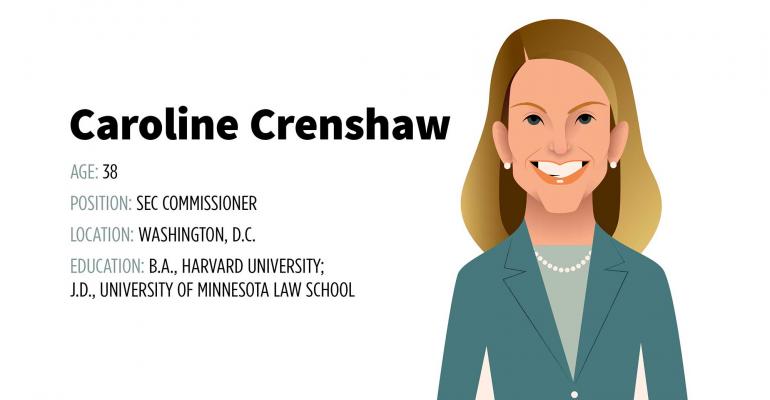 Ten to Watch in 2021: Caroline Crenshaw

Should Joe Biden win the president election, Caroline Crenshaw will likely have an expanded opportunity to help guide the agency’s priorities.

Caroline Crenshaw is the newest member of the Securities and Exchange Commission and ascends to the position during an eventful year, amid Regulation Best Interest’s implementation, COVID-19’s continued impact and the real possibility of a change in political leadership—and priorities—in Washington, D.C.

Crenshaw previously served as counsel for both predecessor Robert J. Jackson Jr. and previous Commissioner Kara Stein. She filled the seat left vacant by Jackson, who is now the co-director of the Institute for Corporate Governance and Finance at the New York University School of Law. According to Jackson, Crenshaw’s work in his office was indispensable.

“I’m a law professor, and one of the hardest things to teach is judgment, the ability to make a professional call about balancing different interests,” Jackson said. “And that’s what Caroline brought to my office.”

Crenshaw has seven years of experience with the SEC, including time in the Office of Compliance Inspections and Examinations. Her tenure coincided with Reg BI’s implementation and release, which will be a central focus of the SEC in the year ahead. Crenshaw is seen as an advocate for retail investors and retirement savers, which she echoed in testimony before the Senate Banking Committee on July 21.

“The nation’s shift from defined benefit pension plans—which my parents, and their parents, relied upon for their futures—to defined contribution plans, moved the responsibility of lifelong saving from employers to individuals,” she said. “That has left too many hard-working Americans without sufficient resources for retirement.”

Crenshaw has served as a captain in the U.S. Army JAG Corps since 2016, assisting military members, families and retirees on a range of legal issues. According to Major John Goodell, a member of the

JAG Corps who worked with Crenshaw, she entered the Corps as a natural leader.

“Caroline walked in like an officer on day one and was someone everyone looked up to,” he said. “It’s not surprising to me that the SEC, Congress and the president all thought she’d be an excellent leader for our markets.”

Jackson believed that Crenshaw’s experience at the SEC gave her a much stronger understanding of the Commission that would benefit her in her new role and believed her work with the JAG Corps would impact her focus, as well.

“I think Caroline will be thinking a lot about young soldiers. She comes to them and she’s their lawyer, and there are brokers out there who target the military for scams,” he said.

Should Joe Biden win the election, he will likely select a new SEC Chair and fill a new seat on the Commission. Should that occur, Crenshaw—currently one of the two Democrats on the Commission—will likely have an expanded opportunity to help guide the agency’s priorities.

But, Jackson noted, Crenshaw is not an ideologue and is well suited to thrive on the Commission whether there is a Republican or Democrat in the Oval Office.

“In terms of adapting, there is nobody better suited in the Commission, or perhaps in Washington, to adjusting and working hard through changing conditions than Caroline Crenshaw,” he said.