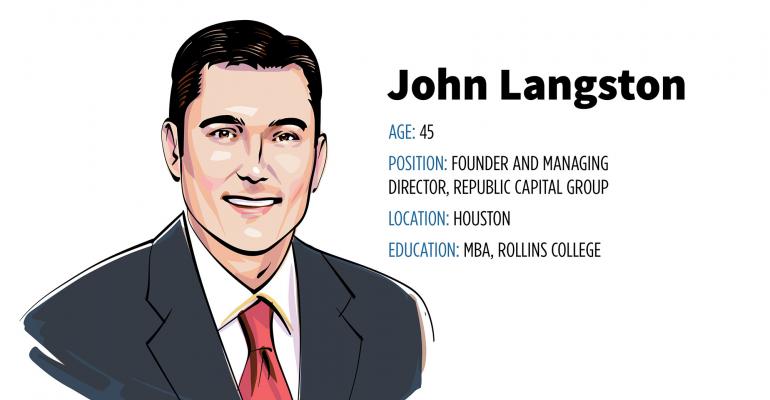 As the pace and scale of mergers continue along an upward slope among registered investment advisory firms, a new type of player is emerging: the dealmaker.

Traditionally, capital for deals among RIAs was scarce, given the “asset-light” nature of the practices, and the idea of a traditional investment banker facilitating such deals was not a feature of the relatively small number of transactions that did occur.

But money has found its way in, including private equity, investment banks, traditional lenders of capital and even public equity investors. The capitalization tables can get complicated.

So it makes sense the more traditional role of the investment banker would find fertile ground here. Enter John Langston. Langston, whose 17-year career in finance has seen him run the gamut from traditional RIAs to non-profits to now investment banking, founded Republic Capital Group in 2015.

The company provides investment banking services to the RIA, wealth and asset management communities, and with a focus on large RIAs (generally $2 billion and up) and a willingness to embrace approaches considered unconventional in the industry—consider the recent LourdMurray deal, where Langston helped facilitate the acquisition of Delphi Private Advisors, to create a nearly $5 billion AUM firm, while at the same time bringing HighTower Advisors in as an investor. That deal was recognized by M&A Advisor, a network of industry agnostic financial professionals involved in M&A, as a “Deal of the Year.”

“I’ve had quite a journey, and along the way I’ve bought and sold an RIA successfully, so we’ve been pretty deep in every part of this world, and I think that gives us an advantage,” he says.

Langston believes the explanation for the recent surge of M&A activity is three pronged: First, the advisor demographic as a whole is getting older. “They’re reaching a stage where they start to think about their own personal plans.” Second, there’s currently a ton of capital available and, according to Langston, “Any time you have liquidity in a particular area of the market that will increase transactions.”

This desire to combine is economic on one hand, but also has an element of keeping up with the Joneses. “There is a recognition by some that as different firms in their region consummate transactions, they eliminate options for them to consider in the future.”

That being said, he recognizes that mergers won’t be right for every firm, noting “We’ll continue to have this bifurcation of some small firms having high profitability because they just don’t have a lot of infrastructure, but the firms in the middle ($400 million to $1 billion) have a higher infrastructure burden and the economics of combining can make a lot more sense.

“I think a number of firms and executives are crossing a bridge of realizing that it’s more important to actually execute these sorts of things, rather than simply being engaged in constant conversation. A maturing industry is recognizing the value that can be created here.”