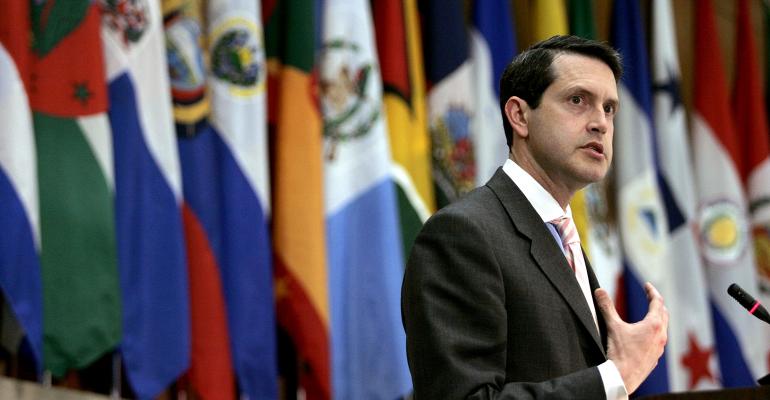 By Robert Schmidt and Jennifer Jacobs

(Bloomberg) --President Donald Trump plans to nominate Randal Quarles, a senior Treasury official in the Bush administration, to be the Federal Reserve’s top banking regulator, according to a person familiar with the selection process.

Currently a managing director at a Salt Lake City-based private equity firm, Quarles would bring backgrounds in both domestic and international finance to the role, said the person who asked not to be named because no final decision has been made. He also has years of experience as a banking lawyer.

Trump’s expected nomination of Quarles would put an end to what has been a long, and sometimes arduous, search for the Fed’s vice chair of supervision. The Senate-confirmed post has great sway over JPMorgan Chase & Co., Goldman Sachs Group Inc. and other large banks. Quarles would play a pivotal role in carrying out Trump’s pledge to remove some of the regulatory constraints that were put on banks in the wake of the 2008 financial crisis.

Quarles joined the Treasury in 2002 as an assistant secretary for international affairs. He was later elevated to undersecretary for domestic finance. At the end of 2006, Quarles left the department and went to Carlyle Group LP where he specialized in investing in the financial services industry. Prior to his time in the Bush administration, Quarles was a partner at the Davis, Polk & Wardwell law firm. He graduated from Columbia University and has a law degree from Yale Law School.

In his current post at the Cynosure Group, Quarles helps invest money from wealthy families, including the Eccles family of Utah. Quarles is married to Hope Eccles. Another member of the family, Marriner Eccles, was Fed chairman from 1934 to 1948, and one of the buildings at the central bank’s Washington headquarters is named after him.

Trump officials have been interviewing candidates for the supervision job since late last year, before the president took office. The choice had been bogged down by a lack of agreement among the president’s advisers and industry lobbying, people familiar with the matter have said.

Though the Fed is one of several regulators that oversee the largest U.S. banks, it has the longest reach. During Barack Obama’s presidency, it took the lead in implementing post-crisis reforms and dramatically ratcheting up Washington’s scrutiny of Wall Street.

Obama never nominated a vice chair of supervision, but Fed Governor Daniel Tarullo handled the job’s duties on an unofficial basis until his departure earlier this month. He triggered endless consternation from Wall Street by pushing through tough capital standards, restricting excessively risky trades and subjecting banks to rigorous stress tests to evaluate whether they could endure another severe economic slump.

Even though the position comes with the title of vice chairman, the supervision chief’s powers are not absolute. Fed Chair Janet Yellen controls what policies governors vote on, meaning she could easily thwart efforts to free banks from tough rules, at least until her term ends in February 2018.