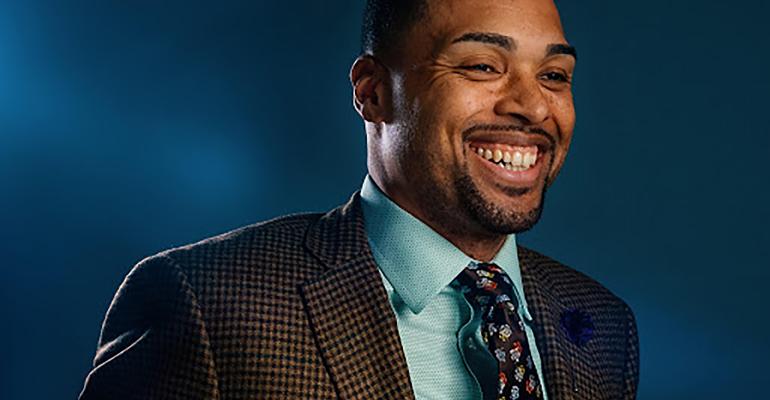 Q&A: Tyrone Ross Jr. Opens Up About His Next Chapter

Tyrone Ross Jr., who stepped down as CEO of Onramp Invest in March, announced this week that he’s back and launching two new ventures: Turnqey Labs and 401 Financial, a registered investment advisor.

Ross recently spoke with WealthManagement.com to provide more details about his plans and what these new businesses will look like. He also revealed that his niece, Amber McLeod, former director of customer success at Onramp, will work with him on both businesses. He declined to name his other partners and early investors.

401 Financial will aim to serve younger investors, those 25 to 45 years old, with between $100,000 and $3 million in net worth, Ross said. The firm will provide financial planning for a flat fee and will not charge on assets under management. They’ll take just 25 families to begin with. The RIA will also serve as an incubator for Turnqey.

Turnqey Labs will be an API suite for bringing cryptocurrency asset data into advisor workflows, something Ross sees as a big pain point for advisors with clients invested in the crypto markets. The tagline for the new venture is “Integrator. Aggregator. Marketplace.”

When asked about what happened at Onramp, he declined to comment but said there may come a time when he will talk publicly about it.

The following has been edited for length and clarity.

WealthManagement.com: What’s the idea behind the new RIA you are launching, 401 Financial?

Tyrone Ross Jr.: The goal for it was, one, over the last couple of years of not actively practicing, a lot of folks were looking for an advisor, whether it was crypto or not, but just really couldn't find a good home. And for all of this talk about next-gen RIA in the space, no one's really building it, right? So the tagline of the firm is 'The NextGen RIA for the Right Now Investor.'

So I was tired of hearing about it. I had the flexibility to be able to do it, because I don't need the income. I have all these wonderful relationships now that I'm blessed to have. I've always been into fintech and using the latest technology and pushing things out there and building myself. So the RIA—outside of being this financial planning firm for Gen Z and millennials, and in some capacity, the youngest Gen X—will also be an incubator for Turnqey, which is essentially going to be a big data API play.

WM: What is Turnqey, and what problem are you trying to solve with it?

TR: One of the things that I realized building Onramp is, a lot of the compliance folks say the reporting is bad. The data isn't up to par. And for me, this problem is going on eight years. The lack of data, connectivity of standardization and insights and predictive analysis, as far as crypto is concerned, is just still not there.

Turnqey truly wants to be that Plaid of crypto. Folks have tried it, but no one has really made it super robust and had it stick. So that's exactly what we're going to do with Turnqey, and we'll pipe data directly into the RIA.

WM: Are you just going after RIAs with this offering?

TR: We'll start with RIAs, because that is the lowest hanging fruit for me, having existing relationships there, but I have had some very early conversations with some potential broker/dealers, so there's a lot of interest in what we're attempting to build here. We'd love to bleed into b/ds, especially because their hands are tied. They can't really allocate. They should be able to see the data. You should be able to see your client's Coinbase account that you have no idea about, right? And you should know what's in it. You should know that the client has traded 150 times last month to be able to tell them, ‘You probably created X amount of taxable events. You should go see your CPA.’

Eventually, we would love to walk into a Merrill, Morgan or Wells Fargo, and say, ‘The wirehouse advisors could use this too. And you can get all of this data on NFT floor prices. You can get risk scores, real time pricing, data, whatever you want. We could bring it to you, just hit our API.'

WM: Where would this data come from?

TR: MetaMask, their Coinbase wallet, Robinhood account, PayPal, Venmo, etc. No matter where it is, we should be able to go get that data and bring it back to the platforms for the advisors.

WM: How is this different from what Onramp does?

TR: I have no clue what Onramp's current goal is or what their road map looks like, so I can't really answer that. But I'm very cognizant of the fact that I don't want to do anything that would be even remotely close to competition with them. When I started Onramp, this is one of the things that I envisioned and hoped that we could get to, but we never did.

WM: Why do you think another startup in the crypto RIA space will be successful?

TR: Because if you talk to my mother, I'm stubborn. And also because I know that there's a problem. As an entrepreneur and a visionary, you may see a problem, but you may see it differently from the actual pain point of the user. If you talk to compliance officers and advisors right now, it's a data issue. ‘I just can't see it in my workflows. I can't get the data to be able to remain compliant. It's not showing up in Orion. It's not showing up in at Addepar.’

If you look at where the space is going, AUM is going to get challenged. It's a roach. It's not going to die, but this is very much a noncustodial AUA plus discretion future; I'm betting my whole career on it. And man, do I look right? So if that is the case, 90 million accounts at Coinbase, 22 million accounts at Robinhood, 50 million accounts at Cash App. There's millions and millions of accounts outside the immediate wealth management ecosystem that they can't see. They have no visibility into it, but their clients all have accounts there. That data needs to be visible. So that's why, and I think that the learnings that I have over the last eight years, right? You try some things, it doesn't work. You look at other things, you get some feedback and you go back and you try to do it again, bigger and better. That's why.

We're not reinventing the solar system here. This all has already been attempted in some way, but eventually a team has to come along with collective insights and talent to be able to solve the problem in a way that reaches the pain point of all the participants. And I think that's what we've been able to do with the team that I've assembled, the early investors that are looking at our team and the advisors that we have going ‘Oh, OK. You guys will figure this out.’ So I think we'll be able to do it in a way that is clear, concise and succinct that it's never been done before, but also holistic because we're going to get everything. There's nothing in the crypto ecosystem that we won't touch.

We have some early investors that are going to open up some doors and provide a lot of value.

WM: At the RIA, are you going to be actually managing client portfolios? What will be your role there?

TR: Will I have clients? Yes. Will I be managing actual portfolios and sitting in front of a screen and doing all of that stuff? No.

I have a partner and CIO who, mark my words, is going to win every industry award over the next five years. And when he runs out of getting them all, they're going to create new ones. So he'll do most of that. I'll work with clients in the capacity that I did prior, where they're looking for an advisor to give them advice on their crypto and that whole thing, but actually sitting and hitting the rebalance button, that won't be me. I'll be more of the face. I'll have a few select clients that I work with, and he and I will develop the strategies and the direction of the firm together.

WM: What’s your take on what’s going on with the crypto and NFT markets right now? How do you react to folks who are dancing on crypto’s grave?

TR: I see the dancing on the graves, and as a space, we deserve it. In all my years in crypto, I haven't seen the sentiment this bad. It's awful. And to be honest, most of it is self-inflicted. I think this selloff was needed. It was too much hype. It was too many scams. It was a lack of building things that had true utility. So I think that there's lower to go, to be honest, I don't think it's over.

But I've also never been more optimistic than I am right now, because the best teams are going to last. There are some phenomenal projects that are just unreal, and those teams are going to build the future. What you're seeing now is essentially like the '08–'09 crisis, but for crypto. That said, I think it's going to be great for the space. It'll build resilience; it'll build perseverance. But right now, those of us that are crypto hippies, we got egg on our face. And I think as a community, we got to take it. And I'm good with that. It comes with the territory.