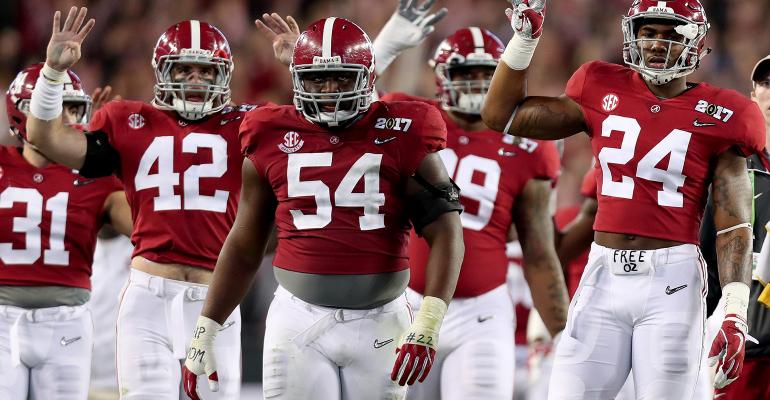 Copyright Tom Pennington, Getty Images
Dalvin Tomlinson #54 was drafted in the second round by the New York Giants
News>People

Dalvin Tomlinson may have a second career as a financial advisor after the NFL, being upfront about fees beats a one-fee structure and Anthony Scaramucci joins the Jeb and Jeter team.

The NFL draft took place over the weekend. While Dalvin Tomlinson, a defensive tackle selected by the New York Giants in the second round, is ready to start his NFL career, he’s already eyeing financial planning for his post-football life. While playing for the University of Alabama, Tomlinson earned a bachelor’s degree in finance and financial planning. “After football, either I want to be a financial advisor or a financial planner, or I want to go into the banking side and work in the banking [arena],” Tomlinson told SB Nation. “So those are the top two things I have right now before football starts.” When Sports Illustrated’s Peter King asked Giants general manager Jerry Reese about Tomlinson, he replied, “We want him to play football. We don’t want him to do our taxes.”

Transparency a Better Approach Than Going Fee Only In the debate over the Department of Labor’s fiduciary rule, which has been delayed until June 9, many have argued the merits of fee-based business, saying this model reduces the conflicts of interest associated with selling higher-priced commission products. But Jim Christian, a financial planner in Lakeville, Minn., believes “‘complete transparency’ over fees would be a better approach than herding advisors into one fee structure,” he tells the Minneapolis Star Tribune. Rather, Christian says advisors should offer their clients three different payment options: a flat or hourly fee, a fee based on percentage of assets under management, or a commission. He calls efforts by Merrill Lynch and J.P. Morgan to move towards a fee-based model “a money grab,” as these firms try to compete with independent advisors. An asset-based fee model can also be more profitable for advisors over the long term, especially if they have clients who don’t trade much. Now that Jeb Bush and Derek Jeter have teamed up on their bid to buy the Miami Marlins — and won the auction as the top bidder — they have hired another top gun to advise them in the deal. Hedge fund financier Anthony Scaramucci, an outspoken member of President Donald Trump's transition team, is helping to finance the deal, according to the New York Post. The Post reports that Scaramucci will help the duo raise cash to buy the Marlins. The deal isn't certain, though. Apparently Jeter and Bush are upset that the team may be spreading "misinformation including the terms of the bid," and that may scuttle any deal. It had been previously reported that former Morgan Stanley wealth management chief Greg Fleming was representing Jeter in his initial solo bid for the team.