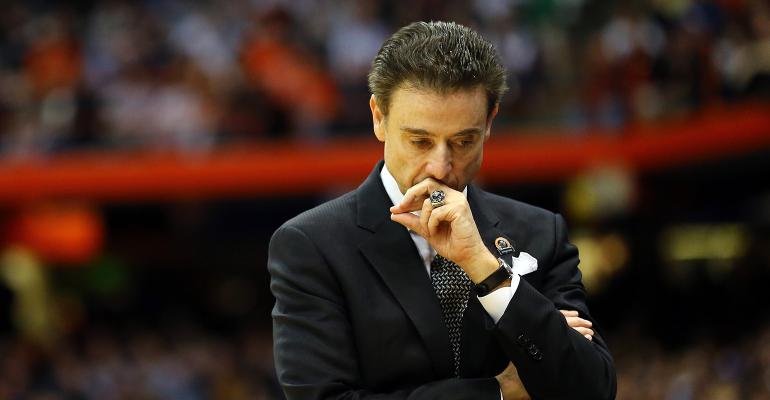 At NCAA Scandal's Core, a Tainted Advisor With Hollywood Dreams

(Bloomberg) --The unraveling of NCAA sports started with a financial adviser who wanted to work with football stars, make movies and produce a bit of country music.

An athletic Citigroup Inc. alum who advised jocks for more than decade, he ran into trouble with securities regulators. So he started playing for the government’s team. Wearing a wire and working with undercover agents, he gave feds an inside view on how marquee schools woo high-school basketball stars -- the foundation for fraud allegations that are sending shock waves this week through colleges, talent agencies and sports-shoe giants.

The feds refer to him only as Cooperating Witness 1. People familiar with the matter have identified him as Louis Martin Blazer III, a 47-year-old Pittsburgh-area asset manager. If the people Blazer talked with over the past year had bothered to put his name in an internet search, they would have found he’d been accused of taking money from many of his clients and was in the government’s cross-hairs.

Cooperating with the FBI from late 2014, Blazer moved among sports agents, clothes hawkers and other middlemen as they cut side deals to bring top high-school hoop prospects to Auburn, Oklahoma State University and others. He was in the room when a University of Louisville assistant coach, a sports agent and others worked out how to use money from Adidas AG to help steer a top high-school prospect to join the Cardinals.

Those and other allegations, unveiled Tuesday in criminal charges against 10 people, may be only the beginning of the ongoing probe. Additional raids followed quickly, along with renewed calls to rethink the corrosive mix of big money and unpaid college athletes.

One of the biggest shocks came Wednesday, when Louisville suspended Hall of Fame coach Rick Pitino, who built one of the country’s most profitable men’s basketball programs with the help of a $160 million, decade-long sponsorship deal with Adidas. Pitino led two schools to NCAA championships and survived two sex scandals this decade at Louisville, but Blazer may prove to be his undoing.

“Cooperators wearing wires often deliver slam dunk cases to the FBI and prosecutors,” developing accusations that can in turn spur more people to cooperate, said Jacob Frenkel, a former federal prosecutor and Securities and Exchange Commission lawyer now in private practice. “This investigation is at the tip-off, not the final minutes.”

Pitino isn’t identified in the government’s complaint. A lawyer for Pitino said he had in effect been fired. “Pitino has done nothing wrong and there is no evidence to suggest otherwise,” Steve Pence said in a statement to a Louisville television reporter.

The government’s complaints don’t identify Adidas or individual universities by name or accuse them of wrongdoing but they are identifiable by details provided in the complaint.Adidas, in a statement, said it is unaware of wrongdoing and will cooperate with the authorities.

How Blazer became a central piece in prosecutors’ case isn’t made clear in court filings. The government, though, has long advanced its investigations by turning accused into cooperators. A portrait of Blazer, and his financial troubles, emerges in records from schools, financial regulators, legal filings and people who’ve worked with him.

After graduating from Carnegie Mellon in 1992, Blazer spent 17 years in the securities business building a client base that included football players. One of those clients, former NFL running back Kevan Barlow, filed a complaint against Blazer while he was at Citigroup Global Markets, alleging he misappropriated or mismanaged $4 million between 2001 and 2009. Citi paid $850,000 to settle the claim and Blazer denied wrongdoing, according to his industry record. Citigroup declined to comment and Barlow didn’t respond to requests for comment.

In early 2009, Blazer left Citigroup for a company set up for him the previous year by four partners, called Blazer Capital Management. Athletically built and speaking with the assurance of a natural-born salesman, Blazer had vowed to bring roughly 20 clients and $50 million in assets, according to one person with knowledge of the matter.

The plan was to provide “concierge” financial services to athletes, mostly pro football players. He also spoke of building his business by wooing pro basketball and soccer players. The company struggled to attract assets and pay its bills, another person said, with Blazer making non-stop sales visits and, when in the office, dropping everything when a client called.

He even personally guaranteed loans for several athletes, according to court records. Some of these deals went sour, like the lease of a Mercedes-Benz S-550 that Blazer guaranteed for Shawn Nelson, an NFL tight end. Nelson, who played for the Buffalo Bills for two years, was out of the NFL by 2012, when a Florida federal court declared him and Blazer liable for a $97,000 default judgment. Later court filings showed the debt remained unpaid. Nelson didn’t respond to requests for comment.

Blazer also wanted to produce movies, and pitched prospective clients the opportunity to invest in them. He sought to raise at least $1 million for two films -- “Mafia,” a 1970s-style crime flick starring Pam Grier and Ving Rhames that came out in 2012, and “A Resurrection,” a horror thriller released the following year. Both were shot in Pittsburgh and include Blazer’s name in the credits as executive producer.

Production costs and revenues for “Mafia” weren’t available. “A Resurrection” cost $5 million to make and grossed $11,000 at the box office, according to IMDB.

By 2013, Blazer had come to the SEC’s attention. It alleged Blazer was shifting money between client accounts to fund movies as well as a country-music project he wanted to fund.

Blazer unsuccessfully pitched his plans to one of his athlete clients, the SEC said. Then he used forged documents to take $550,000 from the client’s brokerage account and steer it toward the two movies, the SEC said.

When the athlete discovered the shortfall and demanded the money, Blazer used phony documents to draw $650,000 from another client -- repaying the first and investing $100,000 in the music venture, the SEC alleged. Then, when the agency’s staffers came to inspect his firm in July 2013, Blazer lied about the transactions. Blazer took more than $2.3 million in all from five clients from October 2010 to January 2013, according to the SEC, before eventually returning $790,000 of it.

By November 2014, Blazer began helping the FBI. Directed by law-enforcement handlers, he circulated among middlemen and coaches from several schools, helping plan the movements of money to young athletes’ families and in some cases delivering payments himself from FBI funds.

The arrangement had white-knuckle potential. Blazer’s undercover role could have been blown at any time once the SEC made its charges against him public after May 2016.

That wouldn’t have been lost on the FBI handlers who set up video cameras in a Las Vegas hotel room on July 27, 2017, ahead of Blazer’s meeting with a University of Louisville assistant coach, a sports representative and the manager of a team for top high-schoolers. There, the men allegedly brokered a scheme to pay the families of a high-school star, aiming to steer him toward the school and sponsorship deals with Adidas.

As the participants tried to work out how to move money from Adidas to one of the families undetected, the coach for elite high-schoolers, Jonathan Brad Augustine, pointed out that one Louisville coach holds sway at Adidas. While the filings don’t give the coach’s name, he’s been widely identified as Pitino.

“No one swings a bigger dick” with Adidas than Pitino, Augustine said, according to the filings, adding that Pitino need only “pick up the phone and call somebody” at the company and they’d take care of his guys. Augustine didn’t respond to a request for comment.

Several weeks earlier, according to the complaint, an Adidas representative had had at least three conversations with someone at the telephone number belonging to the coach, Pitino. Two days after the last call, the complaint noted, a top high-school player committed to Louisville in return for a commitment from Adidas to pay his family $100,000.

Blazer settled his SEC allegations in August 2017 for $1.95 million without admitting wrongdoing. He was permanently barred from the finance industry. Earlier this month in New York federal court, Blazer pleaded guilty -- in secret proceedings later made public -- to securities fraud, wire fraud, aggravated identity theft and making false statements to the SEC.

On Tuesday, acting Manhattan U.S. Attorney Joon Kim unveiled the NCAA-rattling corruption allegations built on Blazer’s cooperation. The Wall Street prosecutor took a brief detour from laying out the matter to level a jab at the defendants who hadn’t bothered to run even a basic check on the financial adviser.

“A simple Google search by the coaches, of the adviser’s name, would have revealed that the SEC had launched securities fraud charges against him just last year, including for misusing professional athlete-clients’ money,” Kim said.