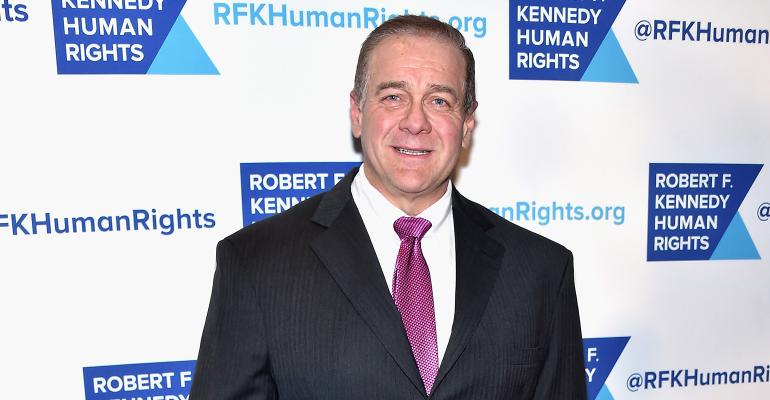 Guggenheim Partners Investment Management has been in talks with global insurers, sovereign wealth funds and investment pools in Europe, the Middle East and Asia.

By Sonali Basak and John Gittelsohn

(Bloomberg) --Guggenheim Partners is exploring the sale of a stake in its $250 billion asset-management unit overseen by Scott Minerd, according to people familiar with the matter.

Minerd, 59, is seeking to strengthen his division, which mostly oversees money from insurers, by diversifying the investment base, which is more than 90 percent from U.S. investors. More than half of Guggenheim’s assets under management were from insurance companies, including several Guggenheim affiliates and Sammons Enterprises Inc., its biggest shareholder, Minerd said at a June 6 insurance industry conference in New York.

While insurance firms and asset managers have long histories of cross ownership, they also face conflicts, such as differing investing strategies, Minerd said this month at the conference. The best outcomes occur when insurers -- or other investors -- buy minority stakes in asset managers, he said.

A deal with Munich Re’s asset management business “could make sense, you may have some cost savings,” said Michael Haid, an analyst at Commerzbank. “On the other hand, insurers do not generally like to give up control over their investments. It’s part of the value chain and so any transaction would have to be structured in a sensible way” to avoid conflicts of interest as Guggenheim manages other insurers’ assets.

Munich Re shares fell 1 percent at 10:48 a.m. in Frankfurt trading. The stock is down 1.1 percent this year.

Recent insurance and asset-manager tie-ups include Nippon Life Insurance Co.’s acquisition of a 25 percent stake in TCW Group Inc. for about $490 million and MetLife Inc.’s acquisition of Logan Circle Partners from Fortress Investment Group LLC, both last year. In 2014, TIAA purchased Nuveen Investments for about $6 billion.

In April, Guggenheim completed the sale to Invesco Ltd. of 77 exchange traded funds for $1.2 billion. That transaction was led by Jerry Miller, who was hired last year as president of Guggenheim Investments from Deutsche Bank AG.

Minerd, a frequent guest on Bloomberg TV and CNBC, is one of Wall Street’s most visible bond-fund managers. A member of the Federal Reserve Bank of New York investor advisory committee on financial markets, Minerd is known for his bold predictions on markets, economics and central bank policies. He joined Guggenheim, which is run by Chief Executive Officer Mark Walter, in 1998 after high-flying stints at Merrill Lynch, Morgan Stanley and Credit Suisse First Boston.

Guggenheim is about 45 percent owned by employees. It has several insurance affiliates and an investment-banking division headed by Wall Street veteran Alan Schwartz, the last CEO of Bear Stearns & Co. A strategic investment would require agreement from the company’s stakeholders such as Sammons Enterprises Inc., which controls about 35 percent of the firm; co-founder Todd Boehly, who left in 2015 to run Eldridge Industries; and Peter Lawson-Johnston II, a Guggenheim family descendant.