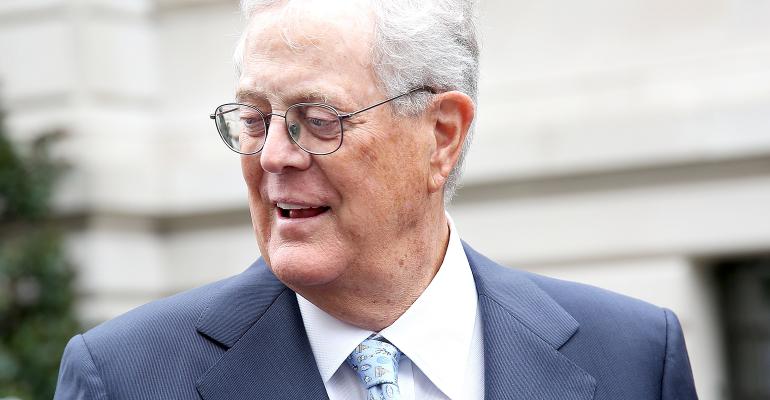 Koch, 79, died after years of fighting various illnesses. Through the David H. Koch Foundation, he pledged or contributed more than $1 billion to philanthropic causes.

By Patrick Oster and Tom Metcalf

(Bloomberg) -- David Koch, the industrialist and libertarian who used his fortune to transform American politics while also donating more than $1 billion to philanthropic causes, has died. He was 79.

Koch died after years of fighting various illnesses, according to a statement from Koch Industries on Friday. He’d been diagnosed with prostate cancer 27 years ago and initially doctors said he had just a few years to live.

“It is with a heavy heart that I announce the passing of my brother David,” Charles Koch said in a statement. “Anyone who worked with David surely experienced his giant personality and passion for life.”

Koch, whose net worth of about $59 billion in the Bloomberg Billionaires Index tied him with his brother as the world’s seventh-richest person, derived most of his wealth from a 42% stake in Wichita, Kansas-based Koch Industries, which has annual revenue of about $110 billion. It is one of the nation’s largest closely held companies, and its spectacular growth included the 2005 acquisition of Georgia Pacific for $21 billion.

A resident of New York’s Upper East Side and the city’s richest person, Koch once joked that Koch Industries was “the biggest company you’ve never heard of.” The conglomerate has interests ranging from oil and ranching to farming and the manufacturing of electrical components.

But he and Charles Koch, 83, became better known for pushing their views than their business acumen, pumping millions into conservative causes and candidates. The operation they built includes more than 700 donors who give $100,000 or more a year and a group called Americans for Prosperity that has chapters in 35 states. It’s rivaled only by the Republican Party in its influence on the conservative agenda in the U.S.

The Koch brothers and other wealthy donors were able to expand their influence on elections following the Supreme Court’s 2010 Citizens United decision that paved the way for unbridled spending, both directly and indirectly, by outside groups.

“David Koch’s imprint on the American political scene will endure long into the future,” said Daniel Schulman, who wrote “Sons of Wichita: How the Koch Brothers Became America’s Most Powerful and Private Dynasty,” published in 2014. “The Kochs helped to give rise to the age of the mega-donor, an era of unprecedented political spending in which wealthy individuals, as well as corporations, can influence politics as never before. His political legacy is huge.”

Yet all those men but Walker worked for President Donald Trump, who has upended the free-market views the Kochs have tried to foster within the Republican Party. That has prompted clashes with Trump, especially on trade and immigration policy.

The brothers didn’t support Trump in his 2016 campaign, although they praised his efforts to cut taxes and regulations. After Charles Koch criticized Trump’s approach to trade and his leadership style during a donor retreat in 2018, the president tweeted that the brothers “have become a total joke in real Republican circles.”

Their political network by then was backing away from reflexive support for Republicans, such as then-Representative Kevin Cramer of North Dakota, who arguably strayed too far from the brothers’ vision of free-market orthodoxy. Cramer nevertheless beat an incumbent Democrat, Heidi Heitkamp, for a Senate seat.

Days after the midterms that year, when the Democrats retook the House despite millions in Koch spending for Republicans, the network called for a more bipartisan focus on what unites Americans with work on criminal-justice reform, immigration and promotion of free trade.

Koch was the vice presidential candidate for the Libertarian Party in 1980. But as his health failed, he became less prominent in the Koch political operation. Charles Koch has served as the philosophical and hands-on leader, while David was chairman of the foundation that oversees AFP, their flagship political organ.

In June 2018, Charles Koch told company employees that his brother would step down from the business and political empires because of health problems. Charles Koch’s letter didn’t provide details, although he noted that David Koch had announced in October 2016 that he’d been hospitalized the previous summer.

“Unfortunately, these issues have not been resolved and his health has continued to deteriorate,” the letter said.

Koch was diagnosed with prostate cancer more than two decades ago. Through personal donations and contributions from the David H. Koch Foundation, he pledged or contributed more than $1 billion to cancer research, medical centers, educational institutions, arts and cultural institutions, and to assist public-policy organizations, according to his official biography.

“A lot of billionaires make their contribution and their name is on the board of directors, but they have no intention of showing up to the meetings,” said New York philanthropist Adrienne Arsht. “He came to meetings. He was always hands on.”

“He was most understated,” she said. “There was nothing about anything that he did that made you think he was anything but a man from Kansas.”

But the Koch brothers played a massive role in politics, helping shape state and federal policy.

“By lavishly underwriting candidates, policy organizations, and advocacy groups -- often through untraceable donations -- they have pulled American politics toward their own arch-conservative, pro-business, anti-tax, and anti-regulatory agenda,” Jane Mayer, who has covered the Koch brothers for the New Yorker, wrote in June 2018.

The brothers were credited with helping underwrite the limited-government Tea Party movement that helped Republicans take control of Congress in 2010. “They helped to unleash a political insurgency that in turn set the stage for our present state of extreme polarization, an outcome I don’t think they expected or desired,” Schulman said.

The brothers favored ending the minimum wage, eliminating so-called “corporate welfare” for new factories and stadiums and backed union-weakening laws. While their efforts got the most attention in Washington, AFP’s nearly nationwide on-the-ground presence meant their influence was felt in state and local matters that included fights against gas-tax increases and referendums on local projects.

Organizations that the brothers help found or fund, such as the Heritage Foundation, the Cato institute, and the Manhattan Institute, have supported some of their ideas through studies and media interviews given by resident scholars.

Characterizing himself as a social liberal, David Koch was pro-choice when it came to abortion and supportive of same-sex marriage and stem-cell research. Further confounding liberal critics, the brothers supported efforts to free nonviolent prisoners and overhaul sentencing, changes they argued would reduce recidivism, save taxpayers money and remove barriers to opportunity.

“He believed he had a responsibility to a world that had given him so many opportunities to succeed,” his family said in a statement Friday. “David’s philanthropic dedication to education, the arts and cancer research will have a lasting impact on innumerable lives.”

He opposed the Affordable Care Act and was skeptical about the need for government to deal with global warming, giving money to groups that raised questions about the scientific consensus that climate change is occurring. In 2011, David Koch called then-President Barack Obama “the most radical president we’ve ever had as a nation,” pointing to damage he thought Obama had done to the free-enterprise system.

David Hamilton Koch, whose grandfather was a Dutch immigrant, was born on May 3, 1940, in Wichita to Fred and Mary Robinson Koch. Their father, after helping Soviet dictator Joseph Stalin develop oil-refining plants, became an early supporter of the anti-communist John Birch Society. That group was often in conflict with the movement conservatism that fueled the rise of figures like former President Richard Nixon, so the family’s politics have long been an uneasy fit in the Republican Party’s mainstream.

David and his twin brother, William, were the youngest of four siblings. David and Charles successfully fought Fred and William in court for control of the company.

David Koch attended Deerfield Academy in Massachusetts. He went on to study engineering at the Massachusetts Institute of Technology, earning a bachelor’s degree in 1962 and a master’s a year later. Koch, who was 6-foot-5, averaged 21 points per game on MIT’s basketball team and held the single-game scoring record of 41 points that stood for 46 years, according to his official biography. He also played for the Boston Rugby Football Club.

Koch worked initially as a consultant and engineer for firms such as Arthur D. Little before joining the family business in 1970. Charles had taken over following the death of their father three years before.

The company then was an oil-refining business worth about $70 million. The brothers turned it into an industrial behemoth with interests in oil refining, pipelines, commodities trading, ranching and paper and pulp products that include brands such as Dixie Cups and Brawny paper towels.

While Charles ran Koch Industries from Wichita, David opened the company’s New York office in 1970, rising to executive vice president as his brother reigned as chairman and chief executive officer.

“David was smart, really smart,” said Frayda Levin, a Koch network donor and former New Jersey book distributor who served with him on the board of Americans for Prosperity. “He could hone in on any issue and ask insightful questions.”

Using his New York base, David lavished money on museums and arts institutions such as the $100 million he gave to the New York State Theater at Lincoln Center, which was renamed the David H. Koch Theater.

He also supported medical research, especially after he survived a USAir accident in 1991 at Los Angeles International Airport. Shortly afterward, he discovered he had prostate cancer, a disease that afflicted his brothers.

“When you’re the only one who survived in the front of the plane and everyone else died — yeah, you think, ‘My God, the good Lord spared me for some greater purpose,” he told portfolio.com.

The David H. Koch Charitable Foundation gave $150 million to the Memorial Sloan-Kettering Cancer Center to build a state-of-the-art outpatient medical facility, the largest single gift the institution had then received. He gave $100 million to MIT to create the David H. Koch Institute for Integrative Cancer Research.

In 1996, at age 56, he married the former Julia Flesher, a former assistant to designer Adolfo. They had three children: David Jr., Mary and John.

(Updates with statement from Charles Koch in third paragraph, backing of candidates starting in 11th.)

--With assistance from Ben Brody and John McCormick.